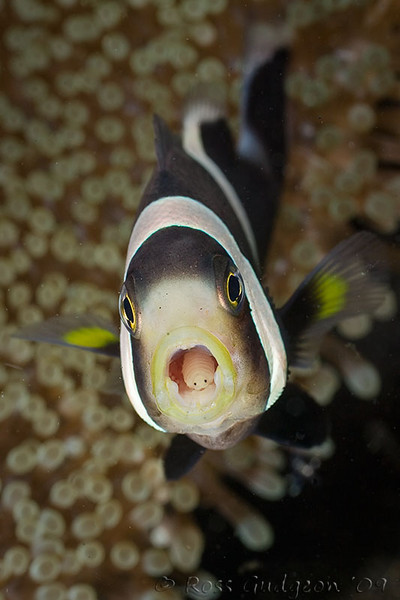 I saw this on my tumblr...
Has anyone seen this before? Crazy looking...

There's a disturbing video about it here:
http://animal.discovery.com/videos

Cymothoa exigua, or the tongue-eating louse, is a parasitic crustacean of the family Cymothoidae. It tends to be 3 to 4 centimetres (1.2 to 1.6 in) long. This parasite enters through the gills, and then attaches itself at the base of the tongue. It extracts blood through the claws on its front, causing the tongue to atrophy from lack of blood.

The parasite then replaces the fish's tongue by attaching its own body to the muscles of the tongue stub. The fish is able to use the parasite just like a normal tongue. It appears that the parasite does not cause any other damage to the host fish. Once C. exigua replaces the tongue, some feed on the host's blood and many others feed on fish mucus. This is the only known case of a parasite functionally replacing the host organ it destroys.

It is currently believed that C. exigua are not harmful to humans unless picked up alive, in which case they can bite

yeah i read about this the other day, went wow!!!

Premium Member
This is the most bizarre (and disturbing) thing I have learned in a while here Thanks for sharing!
R

How does it get into our fish tank? I Deffinately do not want it in mine.
P

That is certainly creepy. I heard about these previously but they were parastizing some cold water fish off the coast of California or something to that effect. I had no idea that they were present among reef fish.

Yes, I've seen it before and it only occurs in some wild caught fish. It really has no effect on the fish.

Here is a link with some more pics and info
http://www.rareclownfish.com/forums/f24/cymothoa-exigua-4376/

Staff member
RC Mod
That is just creepy!
You must log in or register to reply here.

S
Parasite on my clowns?