3 things I need a controller to do Day 1


Reefkeeper scares me from all the CS complaints

The JR scares me as not being enough.

If I am plannign a 160 Gallon as my next tank, on the other side of the room, am I better to go with the Lite vs the JR ?

Went with the Lite today
C

I bought the 'lite' as well as I do not find ORP particularly useful and will have no use for the variable outputs. Top 3 must haves for me: temperature control, pH control and ATO.

ca1ore said:
I bought the 'lite' as well as I do not find ORP particularly useful and will have no use for the variable outputs. Top 3 must haves for me: temperature control, pH control and ATO.
Click to expand...

I will throw in a short story. If you want more details of the circumstances and updates, take a look at my build thread in the Large Tank section here or find it by searching for my threads.

On September 20th (3 weeks ago), my son and I got into into. He decided to hold my tank hostage with a jug of bleach. When I got home and saw him standing on the step ladder over my tank, not realizing what he had in his hand, I yanked him off the stool. In the struggle, the jug of bleach was dropped and a 1/2 gallon bleach went into my 550 gallon system.

I went into survival mode and managed to save the tank but lost all but one fish and in a matter of minutes. I used 16 oz of chlorine stabilizer (novaqua) and 16 oz of Amquel within 10 minutes of the incident and changed out nearly 200 gallons of water within an hour. I followed that up with 40 and 50 gallon water changes every other day for a few days until things stabilized. It took 3 or 4 days for the water to clear up. to I was able to save all my corals and live rock. 21 days later (today), my tank is nearly back to normal and my fish count is now up to 25 happy and healthy fish and a cleaner shrimp.

Why the story?? Well, ORP has been a great indicator of my tanks improvement. It's been something I have been monitoring closely every day. In looking at my graphs, it's clear that ORP is also a great indicator of an issue. I travel a lot and my tank is incredibly stable but my Apex has come to my rescue before. Most notably when I had a leak and got an email while I was 3000 miles away that there was water on my floor. I was able to contact my wife who confirmed it and had her close a valve. If a fish dies in my system, it wont register on my ORP as my water volume is pretty substantial however, if something were to go array, it is a great indicator for water quality and a great device to use as an alert for an issue. In a smaller system, fish casualties can impact water quality which would show up on ORP. There are many other factors that can impact ORP as well. My alarm programming includes ORP.

Moral of the story... Don't discount the value and usefulness of ORP monitoring! You never know when you might need it or wish you had it!


Now for the graphs. In the one below which is a screen shot from Reeftronics you will see my 30 day trend. My tank was steady at 350 ORP before the disaster. Then on the 20th, you can see when the bleach caused the tank to crash. The ORP plummeted in an instant to 145 where it remained for 3 days until starting it's rebound. 21 days later, it's hit 329 which is damn near the levels it was at before the disaster. All of my corals are doing great and their daily improvement followed right along with the ORP improvement. I expect to be at my normal ORP levels by first of next week. The point being that ORP is one of the best indicators of water quality trends and extremely useful when it comes to being alerted to an issue. Don't discount the value of ORP!

Here is the Reeftronics graph which is useful because it gives me a 30 day trend as opposed to a 7 day trend from the Apex App. 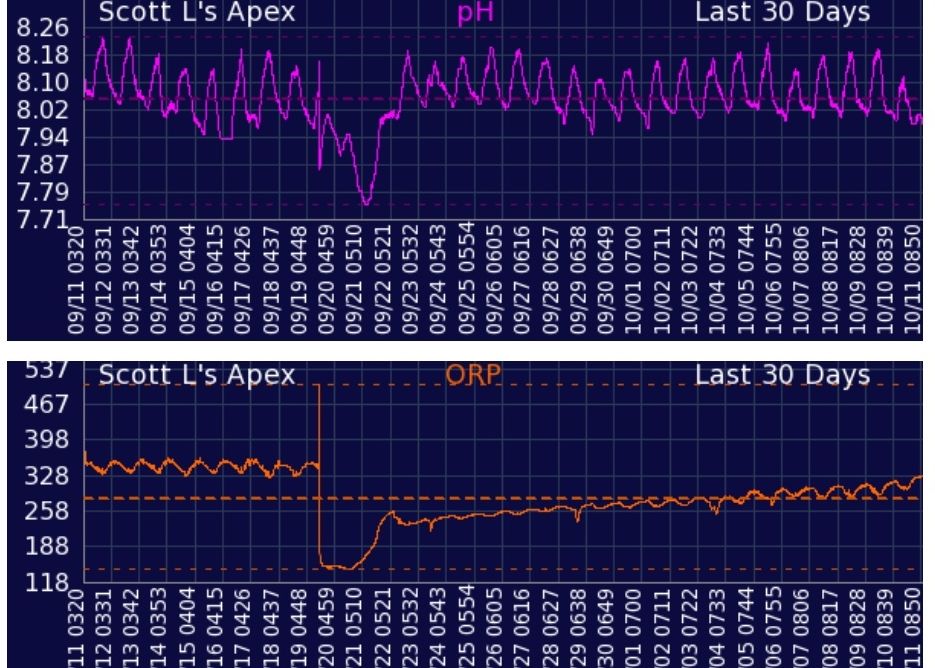 Here is my Apex App graph showing the 7 day trend. The water quality improvement as shown by both of these graphs is very obvious and fairly dramatic. 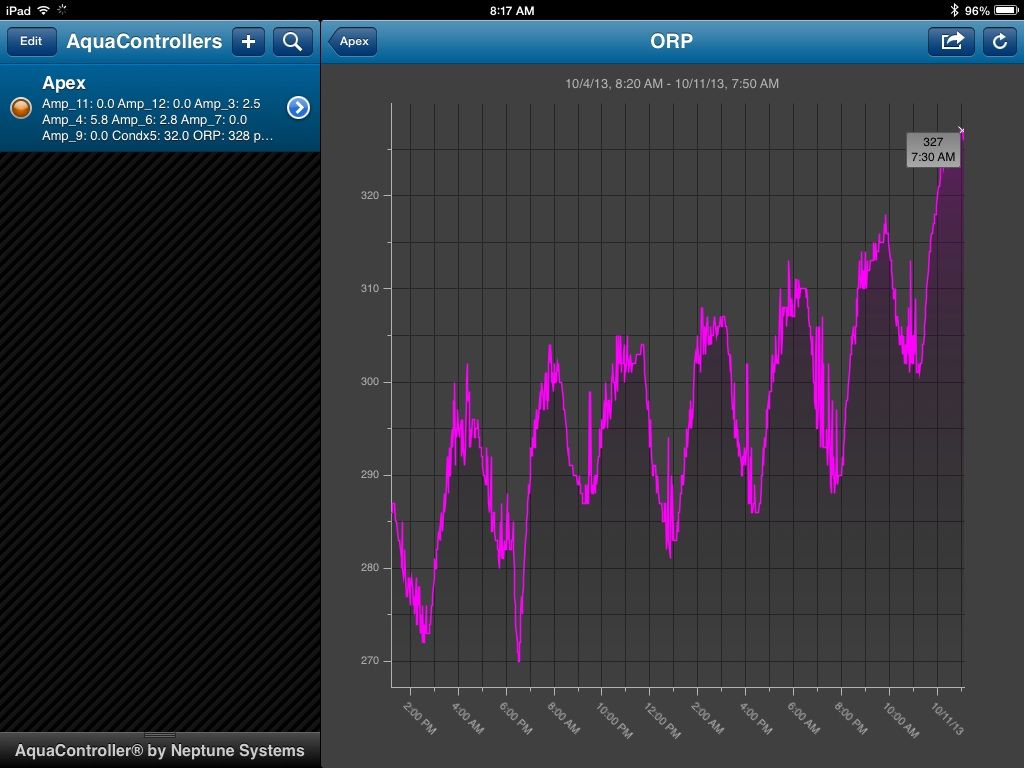