I am looking to add either a pair of Zebra Angel's or Watanabei Angels to my 180 reef. I have done a lot of research but before I spend the money I want to hear about actual experiences with them.

I have a few questions and any comments on general experiences people have had.

How big do they get?

Do they do well in a reef with a lot of flow?

Do they become nasty towards other fish? Currently I have a few anthis, chevron tang, chromis, p. Firefish, and a 6 line.

Lastly does anyone have any pictures, I like the coloring on both but the only pics I have seen are of them in the wild I want to see what they look like in someone's home reef tank.

Thanks for all of your help.

Still looking for feedback from anyone out there?

They usually get to be about 6"-10" and are larger than the usually reef type pgymy angel that is placed into a reef tank. With your size tank, 180gal I wouldn't worry about it. They're very non-aggressive and you shouldn't have any problem with them and your other fish. The ones that I have seen come in usually have ich or some other type of fungus, a lot of this is from bad shipping. I wouldn't keep one in a tank with heavy flow, like some of these sps tanks with the crazy flow.

They do come down with ich some what so becareful to quaratine them.
B

I do have a lot of flow in my tank so I am thinking they would not be a good option for me. I do have quiet periods in my tank through out the day but when the wave maker kicks on the water flow is insane.

So I guess they migh tot be a good idea for my tank.

Anyone have any other opinions?

They are practically the same fish, with different coloring. They are both excellent reef and aquarium fish.

My watanabei are more colorful than most pictures that you see. I have had my pair 2 years in June. I got 5 female melano in the last few months hoping that one will turn into a male. They are great fish too.

I would recommend either.

Here are some BAD pics on mine through coralline encrusted front glass: 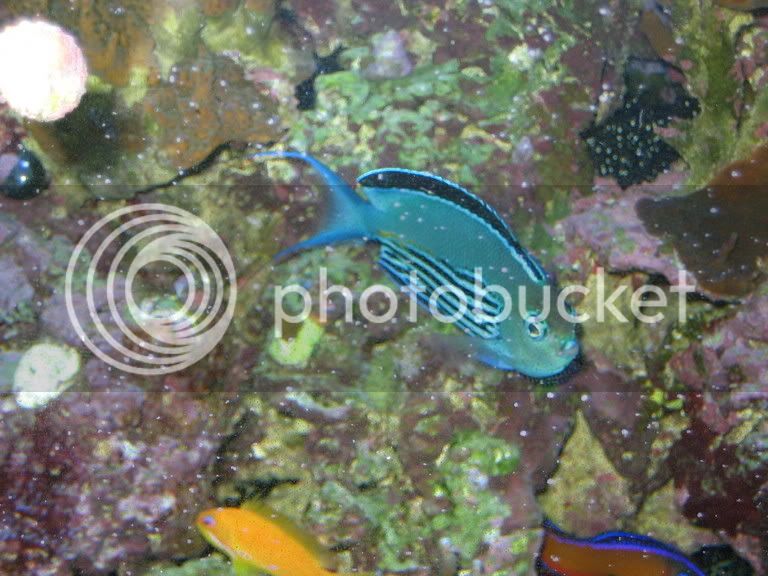 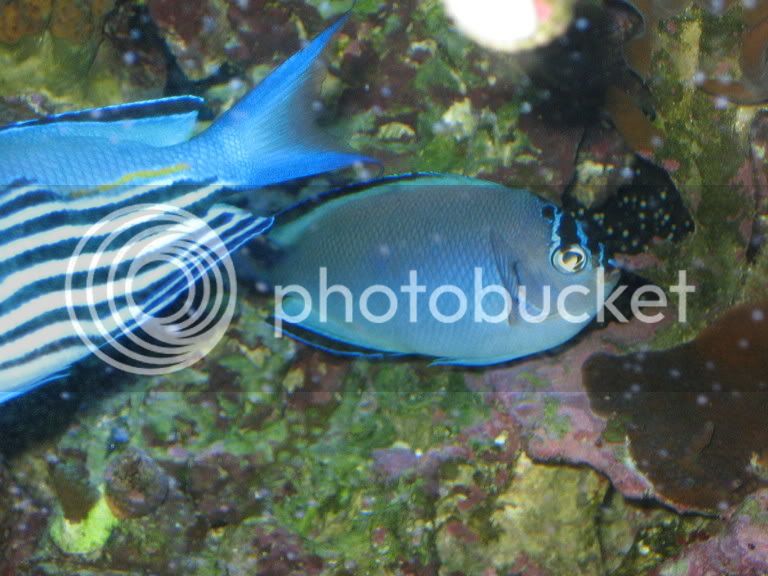 PS - I think that they will do fine with some moderate flow. If you put 4 hammerheads or 4 Ampmaster 4700s on your 180, then no fish will like that.

They are active in the tank and stay in the open. They can handle some current, but are not trout.

Premium Member
I've got a Male wantanabie in my 400G tank. There are some areas with heavy flow but not in the whole tank. It dosen't seem to bother him. I have fish ranging in size from small royal gramas up to a 13" vlamingi tang. He dosen't bother any of them nor gets bothered by them.

Once he got accustomed to the tank, he's out and about. I had also added in a pacific blue tang about the same time and of the same size. They kind of hang out together in the tank.

One thing I've noticed now since I got him back in December, he seems to be loosing his color/stripes. He may be reverting back to a female. I don't know. I'm looking for a female for him now. His colors were awsome though when I got him. The blue continues to be a beautiful color, it's just his black and yellow striping that's fadeing.

From reading a few websites, it seems the Males are harder to get. I hope mine stays male because of that. He eats readily of frozen and pellet food. When I first got him, he did have a bit of fungus on one fin but that has since cleared. I did not QT, but put him directly into my reef. I have a litle of everything in the tank and he hasn't bothered any of it.

Good luck and I think a pair would do great.
C

I keep a female watanbi in a my 90. I have 2 tunze 6000's, 1 tunze 6100, and my sump return at 800 gph. I bought a male with her but he didn't ship worth a darn and I never could get him to eat. If you can, watch them eat before you get them, I had mine shipped to me. I knew itwas a risk , but I wanted them. As far as having them in a reef, she is a model citizen. I have never witnessed her picking on any of my lps, sps, or zoos. She gets along with the purple tang, 2 clowns and purple pseudochromis. She is currently 6" from tip to tail (not counting her streamers). here is an old pic of her 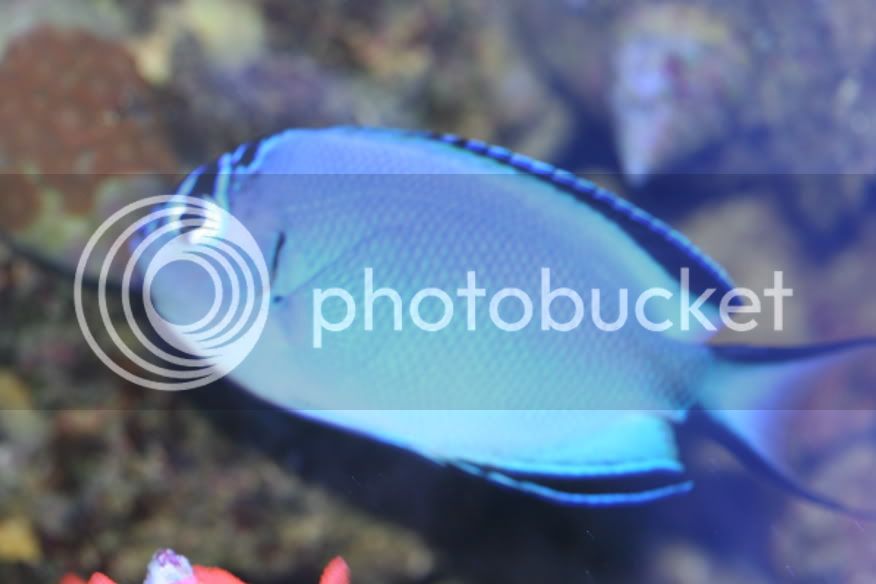 Thanks for everyone's input.

I'm looking for my LFS to get a pair, it will be a few more extra dollars compared to ordering on-line but I have spoken with them about getting in a pair and they agreed that I can pay for them but I will only take them home fter they have started to eat and are free and clear of any "visible" problems. Consider it an insurance policy but they're not cheap and it gives me some peace of mind. If they never make it out of the store I get a full store credit, which is fine with me since I know I will spend the money there.

Premium Member
Keep us updated and post some pic's when you get them.
B

I'll post pics when I get them, whenever that is. I hope my LFS get a pair in soon. From the pictures above it looks to be worth the wait.

Well my LFS got me a pair of Wantanbei's a few days ago, stunnig blue color, streamers look awesome. Thay have been eating and I am currently dripping them into my system. I'll post pics as soon as they are all settled in.

Thanks again for all of the above help !!!1

Here they are, the male is out mostly. He tends to coax the female out.

This is their home-

Some other tank mates-

Just picked up this Chevron, he's from Hawii. I got him after my Black Tang passed on after 4 years, way to young.

No Quaratine? I hope they're ok.
B

I had my LFS keep them for several days to make sure they where 100%. They agreed to keep them for a week after I paid for them. I think they understood the cost and I didn't want to take a chance since I do not have a QT tank, they do this for many customers. As well they give a week "warranty" as long as your water quality is OK (they test it) you get a store credit.

It has nothing to do with a week warranty on the fish, what happen if the fish have some thing and then break out in your tank. You could lose not only these fish but other fish in your tank.

It doesn't take much to get a Rubbermaid container and setup a QT tank.

very pretty fish, in a tank that big with that many fish i would have QT them. Good luck though!!
You must log in or register to reply here.