New pics today. I have posted this tank before in the nano section and today in the club section. It is slowly becoming and sps dominant tank so I thought that I would update here. when I first got into the hobby, 10g unfiltered [only floss], un skimmed would have been considered un do able. The tank has been running now for eight years continuosly with same sand bed, clown, and some of the corals [though they have been fragged or broken many times]. Some of the LR has been swapped out because hydnophora, gsp or other species had taken over.

What are you using for lighting? Dose anything?
K

Chrischin,
Thank you for viewing.
Lighting is LEDs. It has a total of 18 3w crees but currently I am trying out alittle less by only running 12: 9 RB and 3 CW . All with 60 degree optics. It also has three ecoxotic stunners: magenta, violet 403nm, and mixed blue/ white. All lighting runs for seven and a half hours. No dusk and dawn effect. I might start running the other six RB again, but maybe only for two hrs aday.

I only dose B Ionic Alk 15ml per day. I used to only dose 2ml as per instructions but apparently I was starving my corals. Testing daily showed that I had to up it to 15 to maintain 7-7 1/2 dkh. Cal. and Mag and all other trace elements are maintained by water changes. I use ESV salt and it has very high Cal, and Mag. I WC about four gal. a week.

That's pretty cool. Shows that with a little more work and attention to detail, a reef can be kept without all fancy equipment most of us use. Nice tank.
K

cdipasquale said:
That's pretty cool. Shows that with a little more work and attention to detail, a reef can be kept without all fancy equipment most of us use. Nice tank.
Click to expand...

Thanks. It gets alot of my attention but only about 5-10 minutes aday of work.

Updated in the club section. Had to move or remove alot of piece to make room for growth. Such is life in a 10g. Mostly SPS now. Everything is growing quickly and has colored up nicely. Only problem is my camera and that I am the world's worst photographer!

I must say a very nice little nano you have there.

What a great looking nano! Hard to believe its been running for 8-yrs, that's insane! Color and growth are great, I may have to add a magenta stunner to my tank!
K

I have changed the lighting arrangement since what is listed in post #3. I am back to using all 18 crees at full strength and all three stunners. Though I have taken it down to 6 1/2 hours rather then 7 1/2 duration. No dusk/dawn effect.


I have noticed an effect of my WC schedule on two of my SPS. The TriColor and the Blue Fuzz both lighten up (fade) after one of my large WCs. If I feed the tank heavy they start to color back in a day or two. When they have their color back nicely after about 5 days, it is time to do another WC.

My large WCs illiminate the need for filtration. They also reduce dosing to near zero, only alk. The rest of the tank thrives in these conditions. These two pieces appear to like a bit more nutrient rich enviroment.

I appear to have painted myself into a corner.
K

Kind of a spooky look FTS 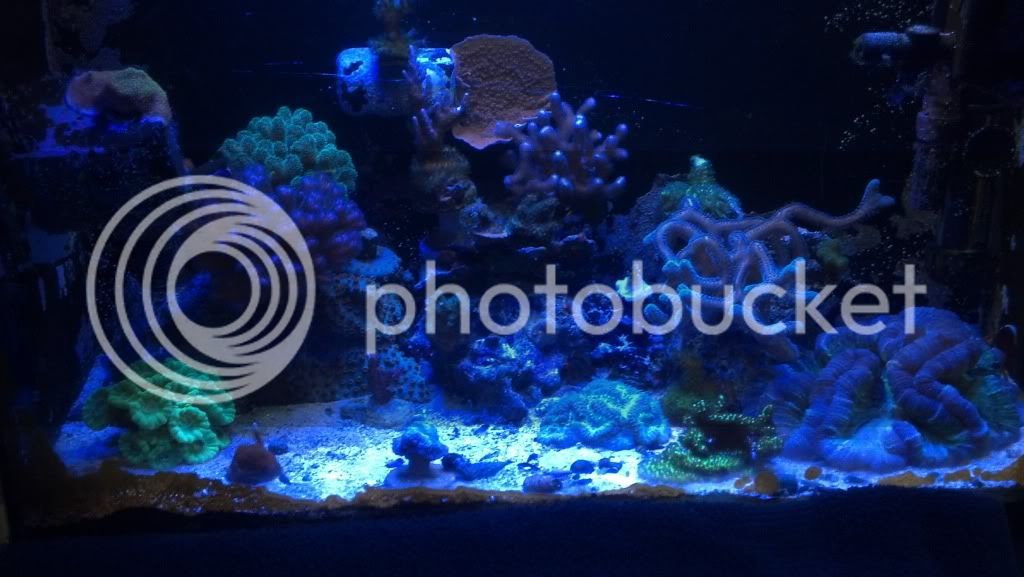 The tank is constantly changing and evolving. Especially these last three years being SPS dominant.

I frag back the Blue Polyp Bird's Nest but it needs space that I could give to other pieces. It will probably end up moved to my 34 shallow display.

Same thing with the rock with the Pink and Green Poccis. The problem there is the Meteor Shower. Cyphastrea is very invasive. Looks cool but knowing what I know now, I would never put in this tank again.

pakirri said:
Wow that is sweet, what type of food do you feed? any fish in the tank?
Click to expand...

There is one evil little clown fish in the tank, been there for all 8-9 years of the tank. He is fed Dianachi pellets a couple at a time so there is little waste. I broadcast feed Filter Feeder Food from reefcleaners.org to the entire tank. The clown, inverts, LPS, and sps all respond to this food. Also , I have not experienced nitrate spikes or algae growth with increased feedings of this dried powder food. Sps colored up better and grew faster.

I have discontinued using other foods for the time being. I was rotating Rod's, Oyster feast, and Coral Frenzy. All did well, but it was easy to spike nitrates and increase algae growth. I sparingly fed twice a week.

Now I liberally feed 3-5 times a week using reefcleaners' Filter Feeder Food.
You must log in or register to reply here.

S
Tank has been at 72deg for a long time!