You would probably be ok with one of those fish.

As you already mentioned, they will destroy the pod population very very fast, so be sure to have some mysis ready.

My single wrasse cleared my 55g fully loaded with pods of all sizes, I can't find a single one now, when before they were smothering corals. This took about a month.

I do have some PE mysis left in the freezer that was being used for my clown before he went carpet surfing. I will have to check my local fish store over the weekend to see if they have any pygmy wrasses that look healthy in stock!
C

Well it has been exactly a month since my last post on this thread. I did pick up a possum wrasse but it is a Yellow Banded Possume Wrasse. I really enjoy watching him swim around the tank. I was worried he would be very shy based on accounts of other people who have them but I am sure the fact that he is alone in the tank results in him being less inclined to hide.

I can't believe some of the tiny holes in the live rock that he can fit into and swim through and somehow come out the other side. Awesome fish to watch! He has a lot of personality for sure. 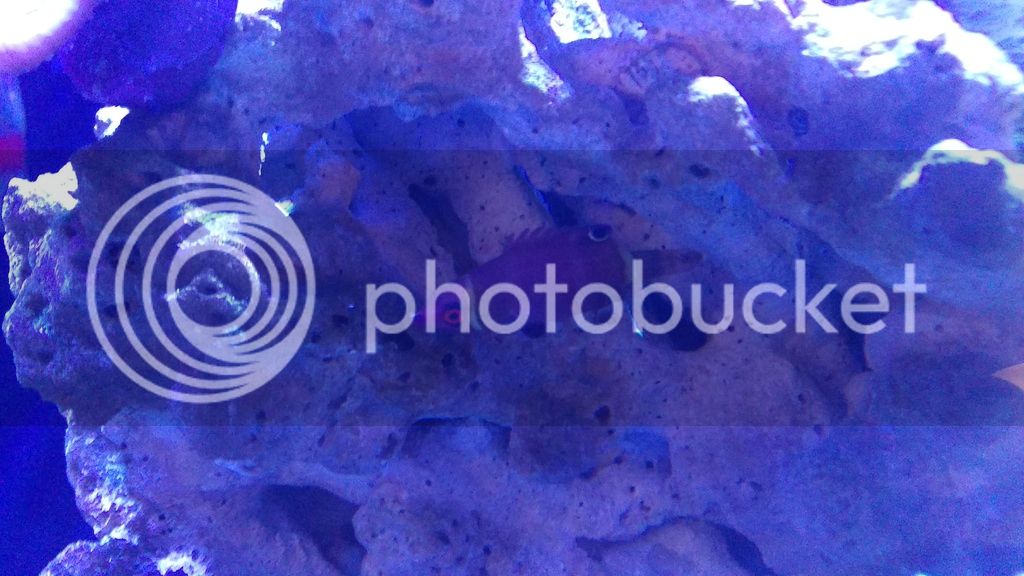 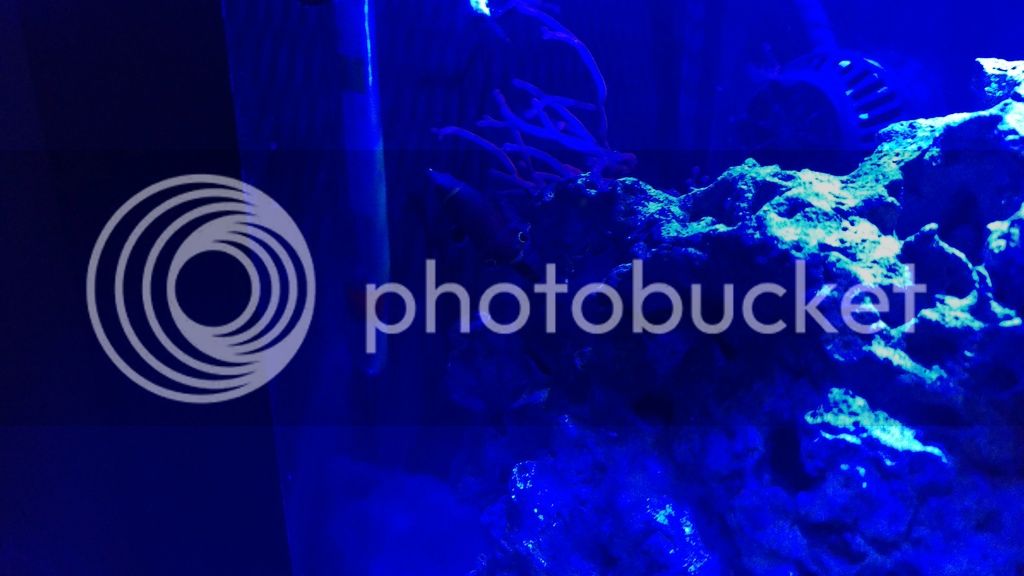 Just wanted to post some photos of the tank in its current state. It has been awhile since I have posted here. 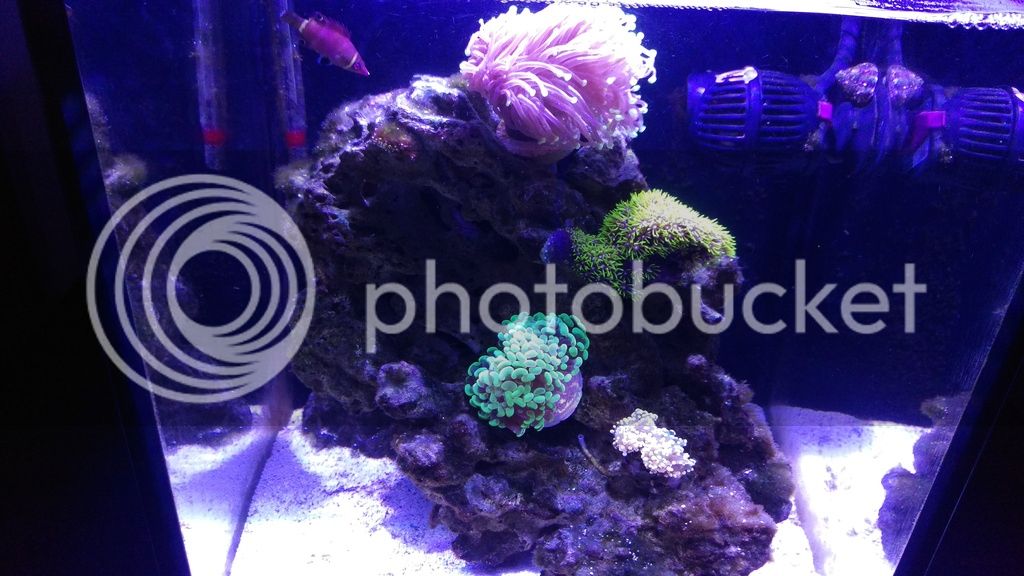 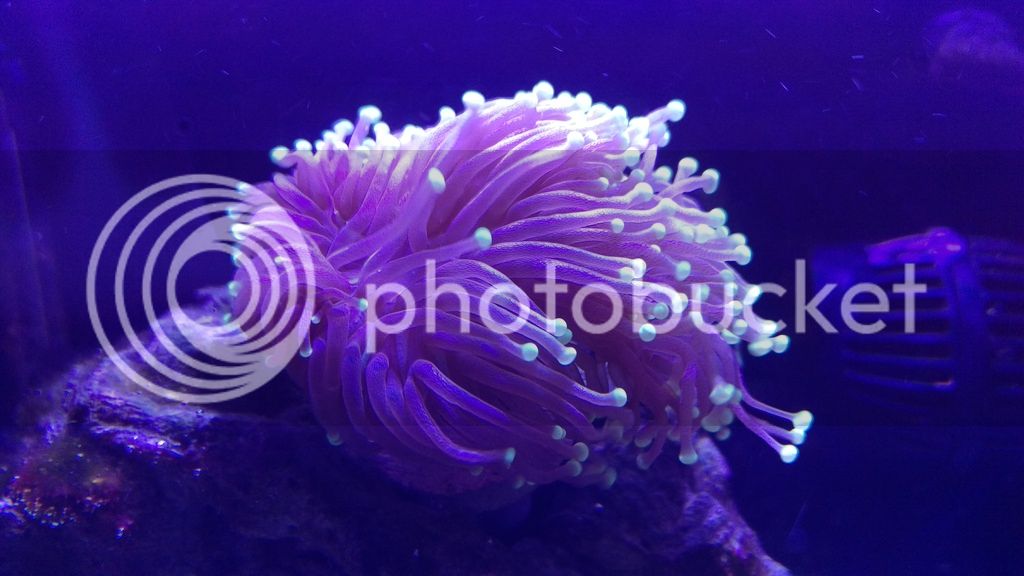 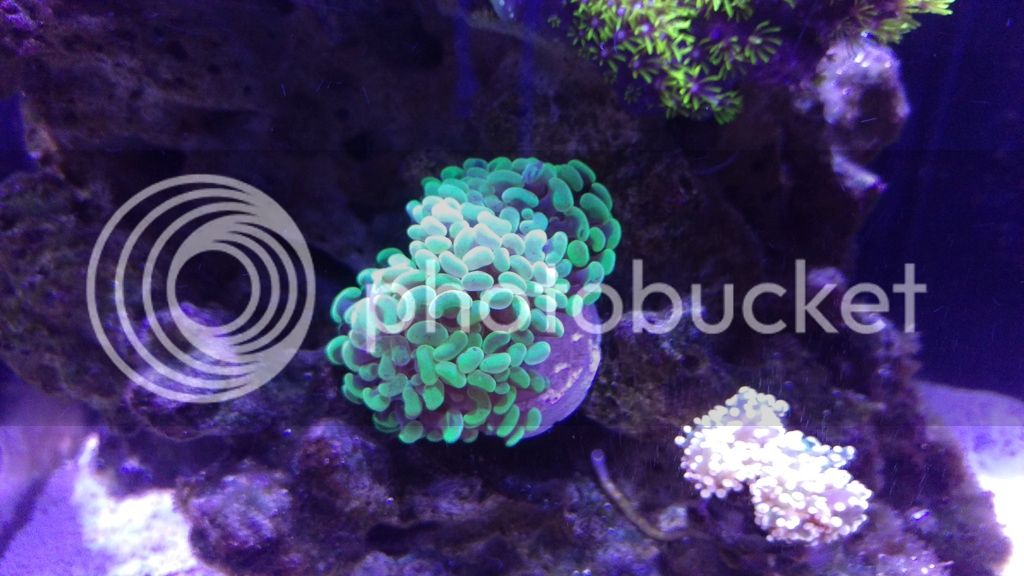 I lost the three SPS I added earlier this summer. The monti cap went first. I think I should have taken it out because as it died, toward the end it started releasing a slime into the tank. Once I noticed, I took it out but after that, one after another my chalice and other SPS went and shortly after that my hammer started receding and never recovered. The frogspawn is close to being dead too. I never knew for sure why they all died but my parameters never changed out of the ordinary (I keep an excel spreadsheet with all of my test results from the start).

My yellow banded possum wrasse seems to be doing well and my entire snail clean up crew is alive and well along with my emerald crab.

The two new coral frags in the tank (Torch and Hammer) were both 25 dollars and are looking great as of right now. The new coral came from a really small boutique style saltwater shop I discovered by accident. This shop is only 2 years old and not many people know about it yet I don't think because in all of my internet searching for aquarium shops in my area never came up with anything for it even though they have a website. I found a post from them on craigslist randomly showing some frags they had for sale and the quality was so much better than the shop I was going to before and the prices on everything are much much cheaper. The torch coral would have been at least 100 dollars at the store I was going to and the plug most likely would have been covered in nuisance algae. So glad I found a good store and will do all of my aquarium shopping there now! Anyone in the Twin Cities needs to check out New Wave Aquaria.

I just found an interview from 9/22/16 with the owner, Jen, by Melevsreef while searching for their facebook link! Crazy!
https://www.youtube.com/watch?v=SBeBMa6PhLY

Well I think that's enough for this update, I will post again in the next couple of months to keep track of the changes!

I hate to say it but if your previous corals all kicked the bucket, your new ones won't be too far behind if you haven't changed anything.

What are your nitrates at? SPS need low nitrates to thrive. Anything above about 10ppm nitrate will slowly kill SPS.
C

I do a two to four gallon water change every 4 to 5 days. The highest my nitrates have ever been since the initial cycle is 5 PPM. I have never had ammonia or nitrite show anything but zero.

(pH, Nitrate, Nitrite, Ammonia and Phosphates are all tested with API. I know there are more precise test kits and this might be something to look into going forward. KH, Calcium and Magnesium are all tested with Red Sea Reef Foundation Pro test kit)

I have had 4 Trochus snails that have been alive since the first month of the tank being up and running. The two Tongan Nassarius snails and the two Nerite snails I added when I added the SPS corals are all still alive as well. (Knock on wood)

I know the swings between the extreme ends aren't ideal but these are the lowest and highest levels over six months and it is only 10 gallons of water. I am not in the hobby to kill things on purpose and I do my best to avoid it of course but I know I am very much a novice and these things happen to seasoned reef keepers. Seeing as I started in March of this year with this being my first fish tank of any kind ever, I won't beat myself up too much over the losses I have had. As I mentioned in an earlier post, I know such a small tank as a starter was not the best idea in hindsight but I am ok with where I am at.

The fact that I assumed I would make mistakes and end up killing some corals is the reason I never have gone out and tried to fill the entire tank up. I just wanted to keep three or four at a time and see how it went.
J

Keep up the hard work Cham. This hobby is full of know it alls. I will say that the nano tanks are much harder to keep stable than the bigger tanks. So the fact that you have kept some stuff alive means you are doing something right. I feed my nano with water from my bigger tank and it keeps things more stable. The Lps is much more forgiving than the sps, so you may have more luck. I will be cheering you on as you learn to keep this tiny environmental alive. keep us updated.
J

Try some birds nest. Mine grew like crazy. I had a 20 tall and did a 7 gallon wc weekly. No skimmer and it flourished.

Thank you Jen for the reassurance! I don't mind the criticism and generally appreciate suggestions as I am still new to this.

JEC, I have been thinking about birds nest and will definitely consider it next time I am looking to add more coral to the tank!

Also, I just wanted to add a note about the Yellow Banded Possum Wrasse in my tank. I was a little nervous about adding it since I had read a number of times where people added possum wrasses to their tank and would only see them once every couple of months.

Since it is the only fish in my tank and it is such a small tank, mine is always out swimming around the tank. I couldn't be happier with this fish for my tank! It is always excited at feeding time and whenever I get close to the tank to enjoy looking at it for awhile, the wrasse swims back and forth next to the glass and flares its spiked dorsal fin up. I know very little about fish behavior but it seems as though it is showing off.

If you have a nano tank with no fish and are looking to add one I would definitely recommend considering a pygmy wrasse!
You must log in or register to reply here.

D
HELP WITH IDENTIFYING IF MY CORALS ARE HEALTHY !

C
Coming Back After a Decade - Need Advice