So sun corals are my fave corals but I'm starting to have trouble keeping them in my largish nano tank (17g) I have them tucked in a cave simply to allow more real estate for other corals but it makes feeding hard and rather annoying. So I'm toying with the idea of setting up a smaller tank for just my smaller sun coral frags.

25l or 6.6g, with a 10l or 2.5g sump. All the live rock and equipment would be housed in the sump which would sit next to the tank as opposed to under it because its simpler LOL. I can just use basic siphons as opposed to overflows. Then the tank itself bare except for some racks for the corals to make feeding and siphoning left over feed easier. No light will be used either. No fish either just sun corals and I might branch into other non photosynthetics as well if this works. Also maybe a small light over the sump so it can double as a refugium with macro algae as a nutrient export. Maybe a Skimmer As well.

In my head it sounds like it would work as it would mean extra food could be easily cleaned up if the live rock is stored in a separate compartment leading to lower nitrates and it should make feeding the corals easier as well.

What do you guys think? At the moment I have three small sun corals I'd put in there two orange ones of different species and a black one.
D

I think that this is possible, especially if some skimmer will be used. Otherwise more water changes will likely be required. And care should be taken with washing out the liquids from the food, will this be frozen mysis cubes or a homemade seafood blend.

I don't know so far another way to remove oily film, that appears in skimmer bubbles after massive sun coral feeding. I asked others, what they do, the answer was - washing twice food before feeding.

I kept big colony in pico, but it lived on massive water changes, what is very bothersome in a long run. I also like to have live rock after filtration, this way it will be much cleaner.
S

Consider a turf algae filter. For your 8 gal system, you'd only need 8 square inches of screen, and a light. Would fit in a tupperware container, and it would remove nitrate and phospate down to zero, while leaving all the food in the water for the sun's to eat. Here more info:

I think your idea is interesting so I am tagging along

If you reasons are mostly feeding convenience and not the challenge of the small tank then why not just run the a seperate Sun Corral tank off the same sump as the bigger tank. That saves on equipment and helps with the waste problem at the same time.

I have no problem with my small sun coral/non-photo gorg tank, there is prob about 15 gallons of water with a 6" DSB, I feed ALOT, I mean like a cube of mysis most days + phyto + cyclops, I dont change more than 10% of water every week, no skimmer, no algae growing, I do have lots of snails though that clean up, with a small tank like that its much easier to do massive water changes if you get carried away with the feeding
D

parkpark:
Please, post a link where I can read more about your tank. I have problems with filtration and trying to study other people experiences.
Thanks.

sorry I don't have a thread for it, I could post some pics but I'm out of town at the moment, I will add some on here when I get back

ha ha, I was just thinking I hope my tank is still there when I get back my husband has already killed off all my phyto....
S

<a href=showthread.php?s=&postid=13080231#post13080231 target=_blank>Originally posted</a> by parkpark
sorry I don't have a thread for it, I could post some pics but I'm out of town at the moment, I will add some on here when I get back
Click to expand...

ok, here are some pics, I've put the suncoral all in a container attempting to get them to spread onto the larger rock, I normally dont even have a filter on this tank but I just broke down another tank and didn't want to lose the bacteria so just stuck it in there 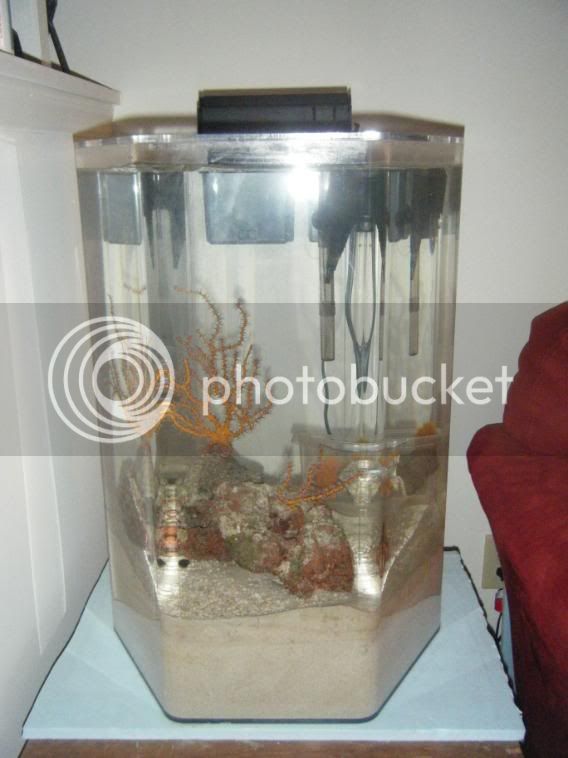 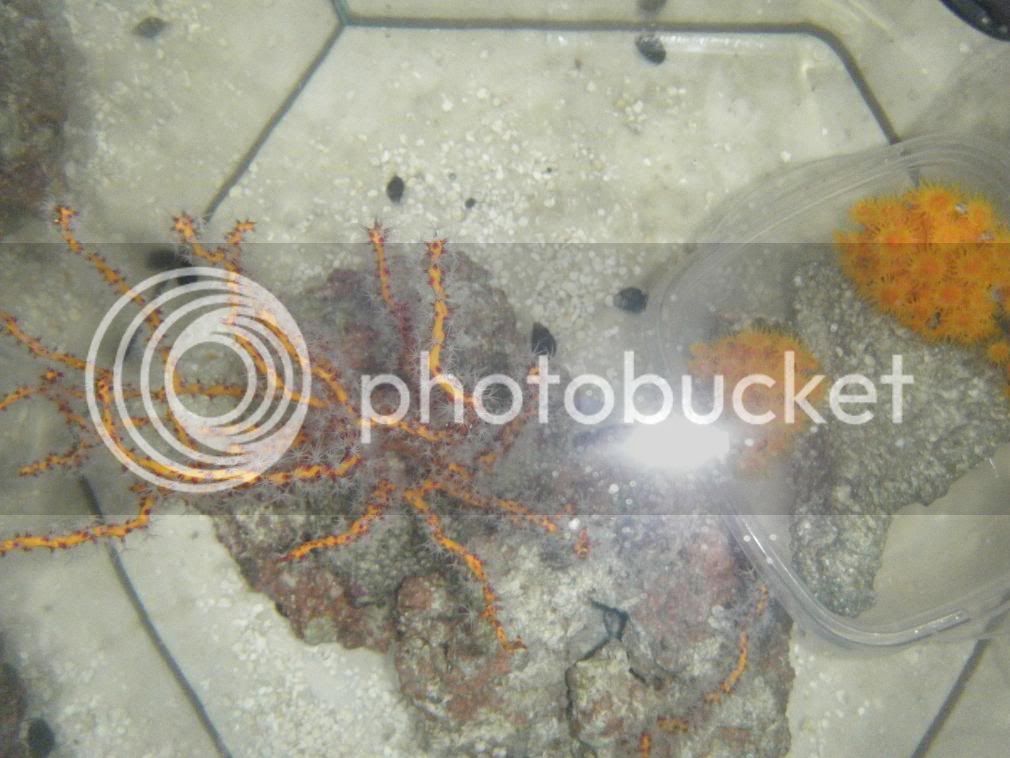 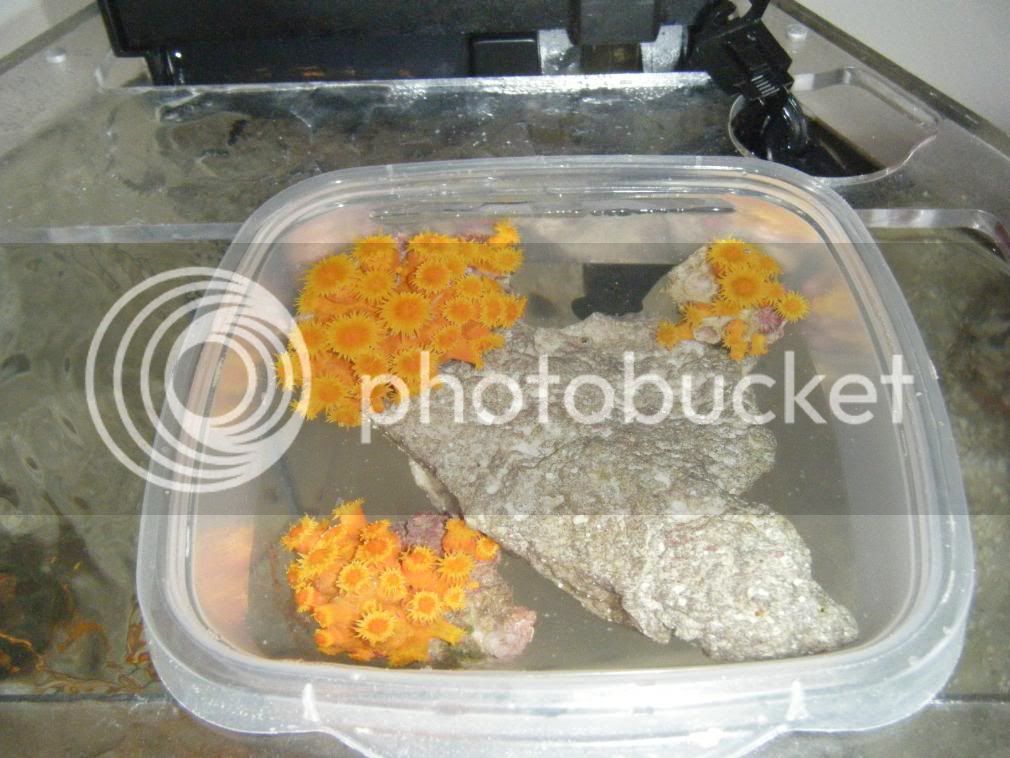 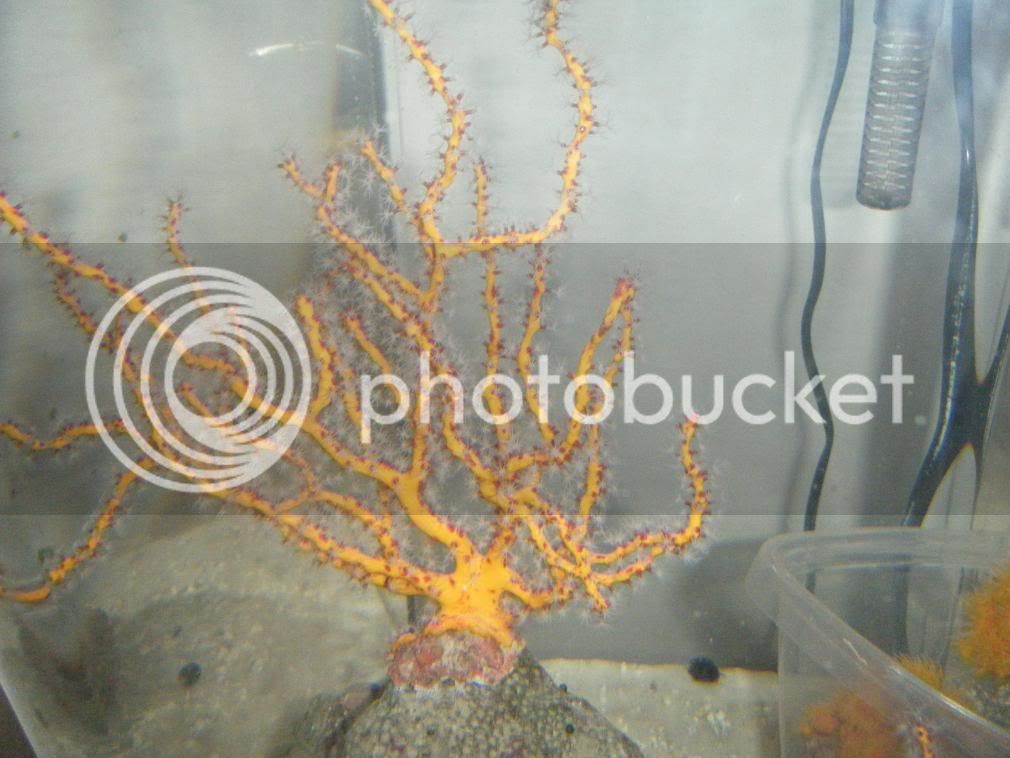 What is water turnover: 20-40 times thank volume per hour?
Did I understand right: no mechanical filtration most of the time?
For how long tank works this way?
What amount of food tank receives, how frequently?
Just curious, for learning.

I had similar tank, trice smaller (5g) with similar setup, with Christmas tree rock. I held well the small amounts of feeding by dry food and even some washed parts of the mysis cubes, but the the whole mysis was present in tank most of the day - for a scooter dragonet - it started to have a problems.

the feeding consists from 2-3 cubes twice a week. 6g tank started to have microalgae growth on the rock, and tubastrea was removed.

But: my sun coral was on branching rock, food was lost inside it and hermits cleaned not too much. May be that was the cause.
Keeping coral on solid bottom, like you do, is much better.

currently i have a powerhead thats 145gph running, though I dont think thats enough and will try to free up my koralia 1 (400gph) which is what has been in there most of the time just needed it for something else, I aim it towards the wall and it creates a nice little tornado which keeps food suspended and makes lots of lateral movement for the gorgs, this is NOT my main tank so I spend very little time messing with it, I dont even test water since there are no fish, usually just doing 10% water changes every week, more If I feel i've fed too much, since I've put the suncoral in the tuperware I have been taking them out to feed, which is prob better for the tank and I can feed them more, I have been feeding about half a cube a day, to them + some mysis in the tank and cyclops, I have 10 nas snails, pods, a few bristles and a few live mysis, theres no algae growing but there is only window lighting coming in, although I did find a mushroom growing in there the other day so im sure there is enough light for algae

If you feed your suncoral too much they will 'puke' up balls of mysis within an hour or so, its much easier to see all of it in the tuperware, so I try not to get carried away and only feed the threshold amount
S

1.So the sun coral stay in the Tupperware all the time?
2. Just take out the Tupperware when feeding?
3. Do you then clean the left over bits or just right back in the tank?

Want to do this with a 15 gallon. Looks interesting.

I just recently introduced the tuperware because I wanted the coral to spread onto another rock and they couldnt touch the other rock just right sitting on the bottom of the tank, I have been taking it out to feed, then dumping the water before returning it to the tank, this works really well and i might just leave them in the tuperware, although its not really asthetically pleasing
D

Short answer, yes, it's possible. I keep two tiny suncoral colonies and a dendro colony (as well as a tiny "unknown" nps coral and some hitchiker polyps) in a 2.5 gallon tank. The trick is that I rely on massive water changes to keep the water quality up. Slightly inconvenient, but dead easy to do on a 2.5 gallon tank!
D

Corals are placed as tightly, as possible : when polyps are open for a feeding, they almost touch each other.

Corals, that were moved there:
This colony, fragged:

Place, they occupied in 90g tank:

All of them, except small babies, less than 6 polyps, are in new nano.

Sump is turned off during feeding and 1 hr after that.

Results:
1. Biomedia and LR are necessary in much more larger quantities, than suggested by manufacturer.
2. Even if they were taken from established tank, feeding better be started from small doses, increasing later.
3. Key element is feeding the washed whole organisms (mysis, cyclop eeze, brine and so on), but not grated or chopped grocery seafood. The last, even washed, has too much dissolved organics (lipids?), that is not removed by skimmer and micron sock.
4. Leftover should be removed after 1 hr after feeding, either battery operated vaccum cleaner, or by basting under the rocks, so unused pieces of food will be picked by pump and moved to micron sock, which will be replaced by other in 2 hrs.
5. If over feed (more, than 1-2 large mysis per big polyp), they will regurgitate in the middle of the night (if it was evening feeding), ammonia will rise.
6. At beginning it's better to control the process, feeding at 7 AM (Saturday or Sunday) and checking ammonia at 2-3 PM. Add ammonia neutralizer, if necessary.
7. Negative part:even with massive water changes, phosphates are too high (0.5 ppm), even if nitrates are reasonable - 20 ppm.
What is needed: phosphate remover with good flow through it, and biomedia with active flow through it too, not just passively laying in the sump.
Ah, forgot: feeding currently is 4 cubes of mysis, will gradually increase.

Summary:
This allows keep sun corals alive, reduce expenses flow water changes, make maintenance more convenient and save nerves (no necessity of daily pickup after a night raid by cleanup crew). But no way it could be used as a display tank for impressing friends
You must log in or register to reply here.