I'm watching these five or six little beauties spread out on my new piece of live-rock, and I think I've narrowed it down to Pseudocorynactis?
At first, I thought it could have been some kind of corynactis, but it appears those are almost exclusively cold water. And mine don't appear to be communal. But they are so tiny I didn't think they were pseudocorynactis. They do extend mostly at night, and are slightly light sensitive.
I'm not even going to try to take pictures, but here are some I found that look almost exactly like what I have:

This one looks just like it, but the tentacles on mine are more translucent, and a little thinner and longer. The whole thing is about the size of a pencil eraser, maybe smaller. This one has the same tentacles, but mine is not as bright, and more reddish. And the tips of mine are white, not orange. 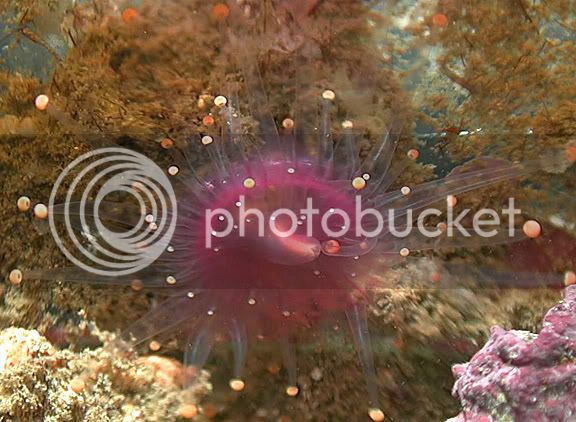 Anyone else have these? Have they been a problem? I've read that pseudocorynactis can get decent sized and eat fish. I'd love to keep them if they'll behave...

So I guess they're either juvenile pseudocorynactis, or an odd tropical corynactis.
Thanks for any advice!

I have some that sound just like the ones you're describing. Clear with red center and white tips. They haven't gotten any larger than a nickel and they only extend at night. I was feeding them for a while, but then I noticed one on the base of a new Acro frag that had some recession. I got worried and kalked them. Looking back on it I'm not sure if it was the anemone that caused this. After I kalked them they shrivelled up, but I later saw one rolling along the sand and now there's a couple on opposite ends of the tank. So I think at least one of them survived and drifted to a new area. For the meantime I only have a couple of them that I can see, and I can't say they've done any harm. But I'm watching to make sure they don't start multiplying too quickly. I don't want an Aiptasia-like outbreak, even if they are beautiful.
You must log in or register to reply here.

E
What are these?