I have two AI Nanos about 4" from the top of the water of my 19" deep aquarium. I'm wondering what settings people are using W/B/B and for how long who have had success with SPS corals?

Settings? (length and %)?
Height of fixture over aquarium?
Depth of SPS corals within the aquarium?

I'd like to hear a success story myself. Ive tried acro, monti, and milli and i always kill them with my AI nano by bleaching. Ive kept the setting very low and very high and in between and havnt found a solution. My lvls are perfect. Ill be running 2 AI nanos on my new setup also.
M

I have been playing around with my light settings for months now trying to figure out the right balance.
I just wanted to share what I have found so far and what issues I was having as well as what works for me.

1) I originally had my AI fixture 6 inches from the top of the water and had my lights around 50-60% when I first got it thinking it was not as bright as a Metal Halide 400watt. I was wrong! the coral frags bleached.

2) found some research to start around 35% W/B/V and bump it up 5-10% each week. This worked a little but frags were still bleaching.

3) I then raised my light to 18 inches from the surface of the water and started at 20% W/B/V. My original thinking was this is not going to be enough light for the corals. Each week I raised the light percentages only 3% and my corals were living, growing and I was getting great Color from them.

Just thought I would post this because it was frustrating trying to figure out what I have learned.
M

I slowly started bumping up the lighting configuration. Right now I'm at:

I'm continuing to slowly (every few days) bump the whites up even more. I lost a bunch of SPS in the beginning life of this tank because I was so worried about the intensity being too high. Once the #s got higher suddenly I did experience SPS growth and my pink b---ies chalice rim colored up to match the pink of the body. Also, a couple of zoa colonies (about 10% from the bottom) started growing new polyps.

Even now, I get minimal polyp extension of the SPS and my red planet is still dull looking.

I have noticed that my miami hurricane (which is on the bottom) looks a little faded during the lighting peak. I guess I'm willing to live with the trade off.

I'd be curious as to whether anyone has a similar experience and/or is running these lights at 100%?

For what it's worth when the SPS were dying (before I turned up the intensity) it was from the bottom up. I about lost my mind wondering what was wrong. I had so much success with T-5 fixtures and read so many stories about LED burning corals that it didn't even occur to me that it was too little light.
R

This is a bit late, but fwiw.

My tank is a 12" cube, SPS tank, with 15 gallon sump, with a bubble magus nac3.5. The tank is bare bottom. Water depth is 10" with tons of flow. Koralia 240, and a rio 6hf return. I run a carbon bag, and vodka dose. Supplementation is 2 Part Bi-Onic, and Red Sea 3 part, but I only use the Mag, to Red Sea regular salt and RODI. I also spot feed aminos(Red Sea). There isn't a fuge on this tank, just a few pounds of rubble in the sump, and a sock, along with the carbon bag, heater, skimmer and return pump.

This tank has been running for a year, and has one AI Nano, on the arm, which was modified so the light would hang centered on the tank.

I bumped the blues up 5% every month for 6 months, and the whites 3% for 3 months. Where everything finally started to color, polyp extension was pretty good, and corals were basing over plugs very well.

Having not seen much growth after basing, I decided to bump things up, majorly. I ran the Royals at 90%, Blue at 80%, but bumped White at 27%.

Colors began to intensify on most all coral, except for a couple. Polyp extension was through the roof. But still lacking in growth.

2 weeks ago, I went for the Hail Mary. Royals at 100, Blue at 100, whites at 35. I have crazy polyp extension, the not so colored corals are starting to show more color, and am just waiting out growth. I have noticed I need to clean the glass more often with the whites bumped up, cleaning the glass on this tank is tough due to it's size, and the amount of coral I have.

I'll bump the whites another 5% every month until coloring, polyp extension, are maintained, and growth becomes apparent.
M

Appreciate this thread guys/gals. My nano will be in today but my tank is still cycling. So it will give me time play with the lights. I'm going to have a combo lps,softies, and sps in an 8 gallon nuvo with the ai bracket.
A

I have a AI Vega Color over my Nuvo16 that is slap full of SPS, a couple LPS and a zoa garden and haven't lost a single piece of coral nor have had any color loss/bleaching. I did set it up to acclimate over a 4 week period scaling it back 30% of my current settings.

Here below is a screen shot of my setup with the Director. 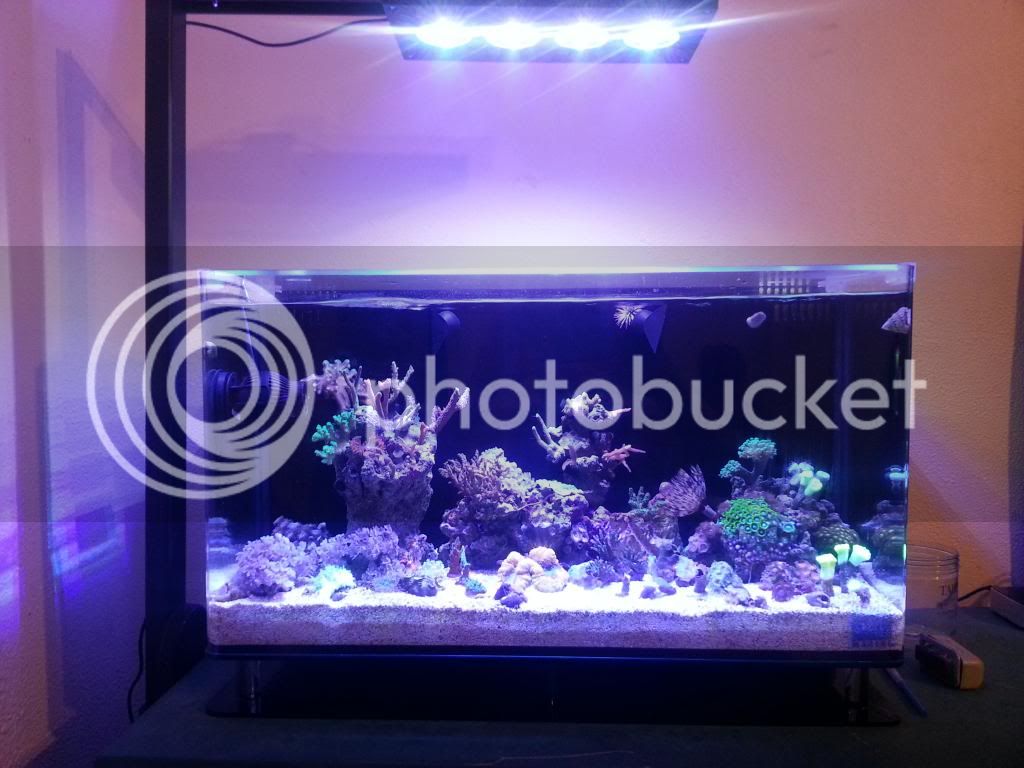 Thursday at 5:31 PM
BlennyfromtheBronx
B
T
Corals for Sale