Not afriad to admit wrong

Team RC
OK I am looking for some input from ALL of us that use Brute trash cans for storing of RO and SW.

Many of us have been fighting all sorts of problem when using the water that has been stored in a brute container.

This morning I sent an e-mail to Rubbermaid (makers of Brute cans):

Within the saltwater fish hobby we have used these cans for years for mixing saltwater and holding water in general.

A few people have been noticing that the leaking of phosphates from the plastic has been reported more and more frequently.
...
Click to expand...

This is the response:

Good Morning Larry,
Rubbermaid Commercial Products would like to thank you for your
inquiry. Per our notes on our 32 gal Brute containers - We do not test
for storage of salt water and would not recommend for this application.
Hope this is helpful.

Should you need further assistance, please feel free to contact us.

SO... lets get some test results from everyone and see what is up with this and steer people in a better direction if this is really an issue.

It is always possible that construction or raw supply materials have changed in the construction of these items and what can be seen in some water may not be happening to all water. It may be based on a certain batch or manufacturing practices.

We need to get a wider range of people to test the water that is actually stored/used in these containers.

This does not only need to be tested with Brute cans. I would like to get a comparison from others on what they are using and any test results to determine a more acceptable solution.

Thanks for your help, understanding, and support on this endeavor.

Once I get a substantial test result I will compile them into xls and post a copy for others to see.
Last edited: Mar 14, 2013

Interested on the results. I just brought a 10gal brute can for making water. Ill test mine when I use it this weekend.
M

Wish there was a container we knew was safe, sold at Petco or our LFS stores. There's enough demand you'd think one of the big equipment manufacturers or Instant Ocean would do this.
A

Besides brute cans, what does everyone else use?

I am very interested in doing this because I do have thr green brute 32gallon container. I havd been having high phosphates but was told that it is my water source. So how do we go about doing this prior to the water going into the container?
P

i used them for almost 2 yrs with no side affects that i notice just recently changed do to a few upgrades and needing more water.

mwilliams62 said:
I am very interested in doing this because I do have thr green brute 32gallon container. I havd been having high phosphates but was told that it is my water source. So how do we go about doing this prior to the water going into the container?
Click to expand...

Sent from my SPH-D710 using Tapatalk 2

I thought the grey ones were good he green ones not good?

Premium Member
This topic has been beat to death over the years, here is a recent thread on it, pay attention to Randy's post.
http://www.reefcentral.com/forums/showthread.php?t=2182844

People love to blame whatever is handy when their own husbandry falls short. The grey Brutes are perfectly fine, just remember to clean them before you use them and clean them after you use them.

Premium Member
Here is another informative post from Randy on the subject...

Randy Holmes-Farley said:
There are multiple issues that people are discussing, and they are unrelated to each other.

Those who are complaining of tank problems have no evidence that the Brute is an issue. Some above complain about algae and pods and cyano, etc. Well, that happens in a ton of tanks without Brutes. There are literally thousands of threads about people with these problems and no Brute cans. There is just no evidence that the cans are a problem from this perspective.
So to the testing issues. A clean Brute can is not going to raise the TDS to 830 ppm TDS by leaching salts from the plastic. But a can with even a trace of salt dust, spray, or a bit of leftover salt mix will do so. Even if it looks dry, there can be plenty of dried salt to push the TDS up substantially. People find the same in any types of container. It is not easy to get a container clean enough to keep the water at 0-1 ppm TDS, and if open to the air, it will rise over time if anywhere near salt dust or salt spray, etc.

As to the phosphate, people really seem to get crazy about tiny traces of phosphate. Yes, people get values with Hanna checkers of maybe 10-20 ppb. Even if real, these are not significant. One feeding with fish food adds hundreds of times more phosphate than people are adding using the water from their Brute cans for top off. No, the 1 ppm phosphate reported above is not normal, and is not from the can itself. Many people have studied this and do not get those levels. I expect that can was contaminated with something (hence the high TDS as well). Perhaps it had bird poop in it from the store, and never was rinsed well enough.

While I frankly do not care if people like or don’t like Brute cans, and use them or don’t use them, folks should be realistic about their use. Of course rinse them before use. If they look dirty, clean them well. That said, many, many folks use them and do not have apparent issues. I use 12 of them, and the ones serving as my refugia are loaded with life, pods, sponges, coralline algae, macroalgae, etc. Could they be less than optimal and I just got lucky? Possibly. But there are many cases of folks using them, and that isn’t really balanced by a few (very few) claims of actual problems and a larger number of test results (like phosphate) that worry folks but realistically are not any sort of problem.
Click to expand...

I have three 44g brutes in use:

after RO - my source is a well and I have discovered the need to bubble off CO2 for a few days.

after DI - aerated RO water then gets pumped through a DI unit.

Never have I had detectable phosphates. I use a Hanna checker so it is easy for me to test.

One thing I like about the brute containers is they have a large opening at the top. This makes it very east to wipe the container clean. The need for this seems to vary based on the salt mix. I like my mixed water to look about as clean as my ro water. If you are plumbing a mixing station use unions so the mixing container can be removed, dumped and washed.

sirreal63 said:
This topic has been beat to death over the years, here is a recent thread on it, pay attention to Randy's post.
http://www.reefcentral.com/forums/showthread.php?t=2182844
Click to expand...

sirreal63 said:
This topic has been beat to death over the years, here is a recent thread on it, pay attention to Randy's post.
http://www.reefcentral.com/forums/showthread.php?t=2182844

People love to blame whatever is handy when their own husbandry falls short. The grey Brutes are perfectly fine, just remember to clean them before you use them and clean them after you use them.
Click to expand...

This for sure.
It's easy to try to blame a trash can or other things for problems in the tank, when, in my opinion the phosphates are introduced via the water source. If you are always using 0 TDS, 0 Phosphate RO/DI, chances are you will not have high phosphates later. I have found the best thing in any tank is consistency in husbandry.
I also think that Randy hit the nail on the head with this simple statement:
"Just a lot of uninformed scare mongering"
In my opinion, this is the biggest problem in our hobby (and others too).


scuzy said:
I thought the grey ones were good he green ones not good?
Click to expand...

I was told the green ones are the food safe ones. So how do we find out which is correct?

Premium Member
The grey are food safe, if in doubt turn it over and look for the NSF imprint.


sirreal63 said:
The grey are food safe, if in doubt turn it over and look for the NSF imprint.
Click to expand...

Thanks I will turn it over to see if the NSF is there are not when I get home from work this afternoon.
R

sirreal63 said:
The grey are food safe, if in doubt turn it over and look for the NSF imprint.
Click to expand...

My understanding is that there are grey ones that are not marked nsf...they run cheaper than the nsf models.

Premium Member
That could be, this is what is on mine... 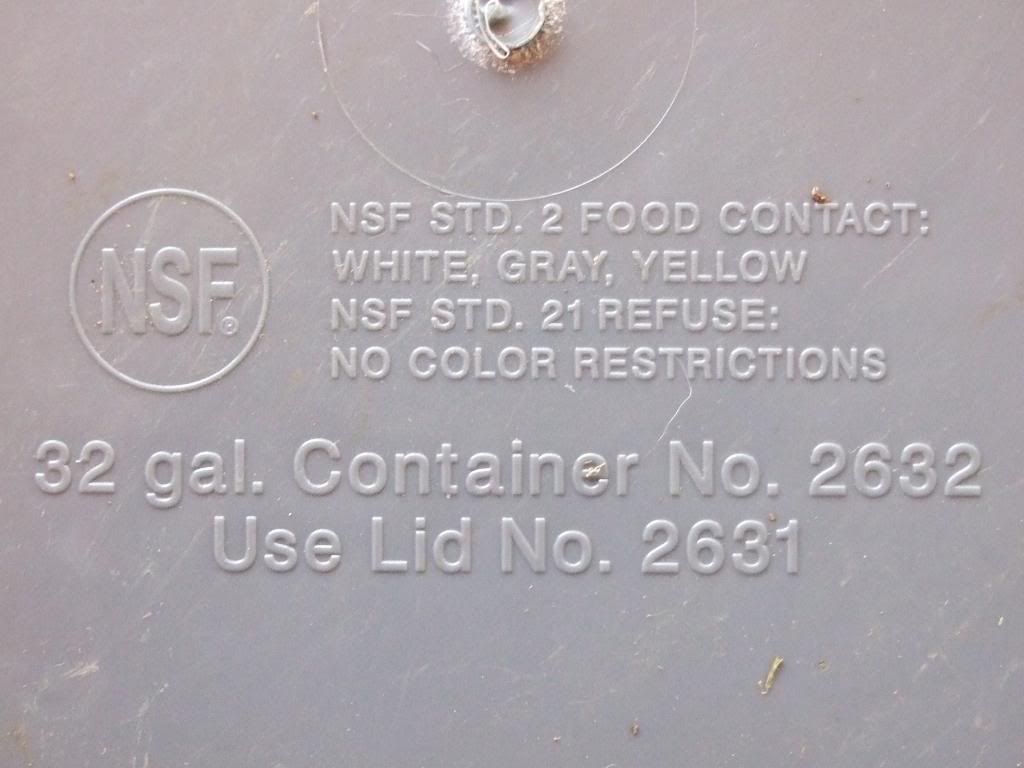 As with any container for water or saltwater, clean it before use, clean it after use and you should not have any problems. I use vinegar on mine every 6 months or so and sometimes bleach but it is always rinsed before and after use.

Oscar the grouch lives in a trash can he seems to do ok
You must log in or register to reply here.

A
Olive barrel for RO storage ?