Anyone interested in picking up some GSP. I have a 100 gal that I need to thin out a little. Also have an adult maroon Clown that will need a new home soon. Check out my gallery for pics, trades would be great.
Orange Ric, any yuma frags, monti frag, red/purple shroom. zoo's. Let me know what you have.

I have a lot of GSP left, anyone else interested?
J

Maroon still available, I would like to thin out my GSP a bit more if there is any more interest.
M

could you post a pic of which type gsp you have?
J

I have a few pics posted in my gallery of the colonies I am fragging from.

How big is the maroon ? I am looking for a mate for mine.
Thanks Harold

I traded for some of this last week.
The GSP is really sweet, bright green, it has long tentacles, and he's got a bunch. Harold, the Maroon is a little smaller than mine. Pretty good size, 3-4 inches.

The maroon has never had a mate, he has had several tank mates and still has a lawnmower blenny and a royal gramma as tank mates. He wouldn't fit in my 4" net last year when I moved. Thanks for the support Doug, frags are looking really good.

do you have a pic of your maroon ? what do you think tourkid both have been in a tank with other fish just not another clown. if they are close to the same size with a slow aclamation process ?
thanks doug looks like i will have to see if they are close personaly i cant remimber how big your clown is.
harold

hangles- you really need to find out how long it was by itself
(with no other clowns) a clown starts off as non sexed. it then turns male, and eventually it turns female if its the most doninant fish OR if its by itself for.. say, 6 months or so.
Once female they cant change back to male.

2 females in a tank would lead to a death.

You need either a juvinial, or a definate male that lost its female and has only been by itself a few weeks.

With maroons, being the hardest to pair, you really need a baby fish. and even then, you want to put it in a see thru container near the females nest for a few days so she doesent kill it right away.

Theres alot of maroon pairing threads in the clown forum because its difficult. I saw a good one the other day, ill see if i can find it. got it 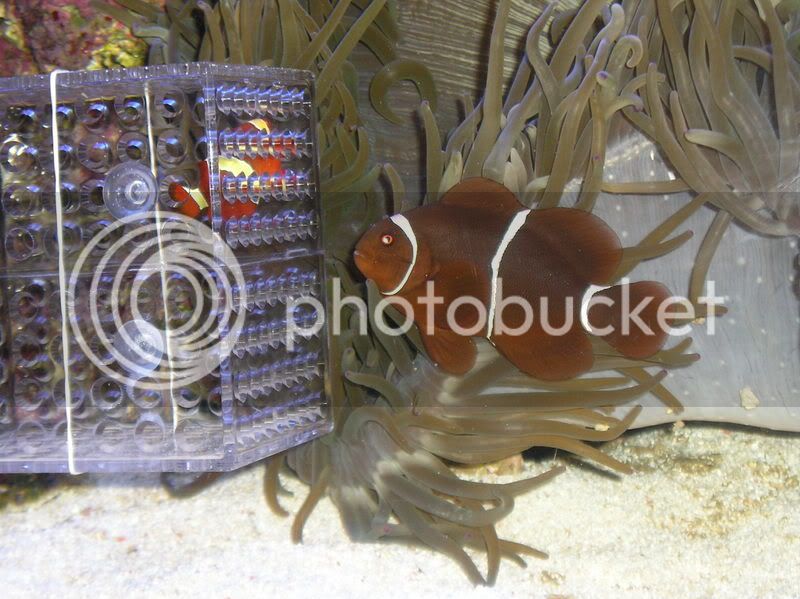 I did not know that clowns eventually stay a sex unmated. what i have read so far says to get them about the same size so that they will not kill one another so quickly. I may have read this wrong. it was in some forum threads if i remember right. we talked about this awile back. about using the cage method to introduce a mate. I will take a look at that thread. thanks !

same size would be ok if they were both still juvinials and unsexed. see if you can find 'clownfishes' by joyce wilkerson
J