I've had this light for about 2 months now and would like to get some people opinions on it and share things that have made it better. I have to say so far I'm not impressed and if I didn't like the open look so much I'd really wish I'd gone with the sunpod. For starters, the clamp to attach the light to the back of the tank seems too weak for the weight of the lamp and I'm contantly afraid of it snapping. The arms don't seem very sturdy at all either. My main problem has been the head of the lamp sagging due to its weight and insufficient clamping force at its adjustment knob. Since there are no interlocking teeth at that joint, the lamp depends on the knob there being able to keep the head in position by acting as a clamp. The first problem I ran into was the knob melting due to heat from the head. I did get a new 'heat resistant' knob from JBJ which is really the same knob with a cheap lock washer to keep the plastic knob from directly touching the lamp. Unfortunately, this washer reduces the clamping force from the knob since it greatly reduces the diameter of the area on contact with the lamp head. Also, due to the plastic threads in the arms, it is impossible to tighten this knob enough to hold the head in place without breaking the threads or stripping them. They should have used a metal nut built into the arm here.

I am currently trying out a split-ring lock washer to see if that helps with the head sagging. Has anyone else found a solution for this problem?

As for a nightlight, which this light sadly lacks, I have used the coralife LED, designed to be sunction cupped onto the side of the tank. I have it attached to the middle arm of the viper with black zipties and it is really not very noticeable at all.

Please post if you've had any success or problems with this lamp! I really like the look of the open top and want to make it work, I'm sure there are others in the same position!

Premium Member
shouldn't the knob be heat resistant in the first place.
get the sunpod

It should be, but apparently plastic isn't.... who'd of thought!

Its too late for me, I'm gonna get this thing to work though! Sunpod just looks too bulky relative to the viper for me, but I'm sure it is a lot more trouble free.
K

hey i have this light as well. i got a prettty good deal on it but your right about the knobs. It is not strong enough to support the light. I super glued it but this is only temporary since the heat constantlys melts it.

I've been wondering about some kind of glue but wasn't sure about the heat, guess that's out now too!

The split ring lock washer didn't work, the plastic threads aren't strong enough to accomodate the stress required to compress the lock washer. Guess I'm not surprised. Sadly, I still haven't heard back from JBJ on this problem. Can't believe that would make a product like this and not test it!

I'm almost at my last resort, which is drill 1 or 2 holes through the joint where the head meets the arm and run a bolt through there, then tighten it down with a metal nut on the other end. A flat washer would be used to distribute the stress over plastic arm to prevent cracking. This would still allow adjustment of the angle if I ever wanted to change it. The other option with 2 holes is similar, but instead of relying on the clamping force to prevent the head from sagging it would use 2 bolts to permanently fix the head in position.
S

Hrmm..
are you using the 70 or 150 watt version?
I ordered mine in middle of may. Mine's the 70 watt version, and I've found if you tighten them enuff, they'll stay put. I've never had a problem with mine as far as the moving goes.
My problem is: I guess i haven't found the "sweet" spot for the height/placement of the lamp head to light the whole tank (10 gallon)
It seems as tho if the head is close to the water the corals and sand directly below the light are real bright, but the sides are shaded. If the lamp is 8+ inches above the water line, the whole tank is lit up, but seems very dim.
I've been trying to see if anyone using the 70 watt version has swapped out the jbj stock 14k bulb w/ another and how much brighter it was w/ a different brand of bulb. I have a 70 ab 10k bulb coming next week, so i'll be posting results.
I also think the reflector is poorly made. I could have made a better one with straight aluminum foil i think.
Stewie
N

Thank you for starting this thread. I have been interested in adding this light but have concerns First, the issue of the melting knob now your issue with it supports of the fixture. I just have to wonder about quality control with this companies products including the cube issues. Coralife has a clipon MH figure on the Marine Depot sit. Its 250. so more than the viper but ot might be better? Clip ons are great for so many tanks so I wish there were more choices.
N

Mine is the 150W version. I've heard the 70W doesn't produce enough heat to melt the knob, so maybe you're ok... hopefully.

Mine is about 7" (when it's working!) over my 24g aquapod and I have been pleased with the light distribution. I will agree though that the reflector is cheap!

noschmo, I assume you're talking about the "Coralife Aqualight Advanced Series Hang-on Tank Mount Fixture"? I almost did get that, but heard some people say that due to the vertical slats they had trouble getting even light distribution, and that the points of adjustment did not allow optimal positioning (although I think someone came up with a modification for that). It is also almost as bulky as the sunpod, and like the viper, doesn't have any LEDs or actinic lighting. Not bashing it, just stating the reasons I didn't go with it.

Seeing as I pre-ordered the viper in january, waiting on it for 2 months, and am now having these problems, I almost wish I'd just gotten the above coralife light or the sunpod!
S

Do you have your head pointed back like it shows in the photo here?
http://www.jbjlighting.com/images/sys_k2_viper1.jpg

Or do you have it so its perfectly horizontal over the tank?

I have mine horizontal over the tank, maybe pointed slightly downward so its not in the eyes of people that are sitting down near the tank, but definitely not at the angle that they show.
S

Thats the same way I have mine. More horizontal or pointed slightly down but definitely not like they have showing.. perhaps its just a poor reflector or poorly made bulb.
Stewie

Could also be the tank's dimensions, since mine is an aquapod it is relatively square compared to a 10 gallon.
S

Thats true.
They say 1 mh light per 24 inches long. My tank is only 20 inches long so you'd think it would be covered. Who knows.. time will tell when i get that new ab 10k bulb.
Stewie
O

I have the 150w version and have not had any problems as of yet with the knobs or it moving or the head drooping. But I do agree that they could have come up with a different system. Here is a picture of ours. I found that with it about 7" and pointed back a little the whole tank is covered. I did upgrade to a phoenix 14k bulb. 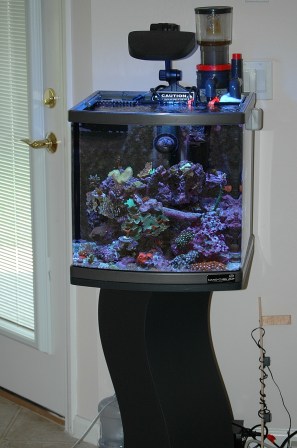 Hey ocnreef, nice skimmer.... I've got the same one on my aquapod! What's that in the middle of your back wall - is it a hydor or something different?

I'd say my head is tilted less that that, but close. I'd take a picture, but it is currently dangling straight down!

<a href=showthread.php?s=&postid=7573829#post7573829 target=_blank>Originally posted</a> by springerhd
Hey ocnreef, nice skimmer.... I've got the same one on my aquapod! What's that in the middle of your back wall - is it a hydor or something different?

I'd say my head is tilted less that that, but close. I'd take a picture, but it is currently dangling straight down!
Click to expand...

Yes its a hydor on a MJ600 and a cheap power sweeper next to it.
E

Premium Member
Interesting thread.... I have no problems at all with it moving forward. I think it is great.

Yesterday I removed the knob, drilled a hole through the arm to accomodate a 5/16" bolt and ran that through capped off with an acorn nut. There are flat washer on both sides and a split ring lock washer against the bolt head. So far it is holding very well, won't even budge if I tap it. I'll post some pics and more details if it seems to hold for the next couple days but looks promising so far.
You must log in or register to reply here.

R
Clearing out the closet