Does anyone keep anything other then saltwater fish & coral?

Here are a few pic of some of my other pets.
Lake Tanganyikan cichlids

I also have a hedgehog but don't have any pics. I will try to get some and post those.

I'm looking to see if anybody on here has some Jackson's chameleons they are breeding or any chams that they are wanting to get rid of!

I am going to hack the spelling but I think I remember it. That yellow cichlid in the third pic is that a brichardi?

I seem to remember they had a pretty cool breeding and social order.

I have only one brichardi so I don't really know there breeding habits. But as far as getting along with the other cichlids he doesn't bother any of the others.

I have more pets than I should have but wouldn't ever get rid of any of them now that they are part of the family.

Nina- Double Yellow Headed Amazon, She talks up a storm and is just plain crazy at times

Simon- My fat cat (20lbs ) His hobbies are eating and sleeping!

Luci (Black thing on the left) Toy Poddle, I got her for my girlfriend but she didn't take her when she moved to her own place.

Claude (middle) I didn't name him....I picked him up from someone on craigslist for my sister who decided she didn't like Beagles, Really well behaved and is the only animal in the house that can take on the poodle!!!

Rocco (right) My daughters dog.... I think he's related to the cat...He likes to eat and sleep also.

I have more pets than I should have but wouldn't ever get rid of any of them now that they are part of the family.

im in the same boat Ive managed to build up my own zoo. One tarantula, 2 dogs, 1 snake and one canary and Im getting ready ot buy two tree frogs. none of which I could give up.

oh and three carnivorous plants. they are as good as pets they eat insects.

Funny you should bring this up...last week the wife fell in love this this black lab. It was pretty much an impulse buy and after some buyers remorse we completely love her now! She is 12 weeks old today and we are just about done potty training and she knows her name, can sit, stay , and come. I worked with her just a little bit with a pheasant feather on a fishing pole and she completely holds a point! I am so excited about that. I am going to do obedience training with her local here but I want to send her away at 6 months old for hunting training. Anyone know of any good trainers for hunting? 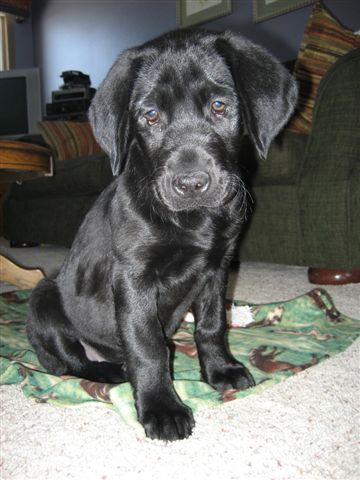 <a href=showthread.php?s=&postid=9270631#post9270631 target=_blank>Originally posted</a> by Bullet
Funny you should bring this up...last week the wife fell in love this this black lab. It was pretty much an impulse buy and after some buyers remorse we completely love her now!

Very Cute, I love Labs. Had one when I was a kid.
I know what you mean about the impulse buy, When my sister decided she didn't want Claude (The Beagle) I started looking for a new home for him. My Daughter wanted to keep him and of course I said " No, We already have to many animals". After a couple days I decided to keep him...now the remorse part comes into play:rollface: I left for a few hours one day and he decided to knock over the garbage and spread everything out over two rooms and destroy a set of blinds while he was at it, I was so mad when I came home.

He must have learned something from the long stays in the kennel when I wasn't home because I can leave him out now and only find his toys on the floor.

You can also buy birds with a metal head on them shoot of a fire cracker and throw the bird. This helps to tell if they are gun shy and the metal head keeps them from picking it up and shaking it. (Beats the crap out of the dogs head if they do). My retriever is really good about this

Cool pets everyone. Wesly2006 what kind of tarantula and snake do you have?

Here are my wife and oldest daughters cats, Tigger and Nicki. On the right is my oldest kid, Gus. Clearly you can tell he could care less about the two cats less then two feet from him. He's 7 1/2 years old or so. We got him from the pound though, so not really sure about his history prior to when we got him. We've had him about 2 1/2 years now.

This is Felix the cat. We are supposedly cat sitting this one, but the owner after dropping him off in October, haven't seen her since. Good thing he's a good cat, just hungry and packed on the pounds since we got him.

This is Marshmellow. He's only 4 months old or so. He's from Nicki's litter, and the only one we kept.

This is blacky the FW shark. He was my wifes late cousins fish and was given to us after his death by his fiance. He's a good 12" long and has a bit of a attitude problem.

This is sucker the algae eater that came along with the shark. He is a good 10" or so as well.

Here's Oreo my oldest daughters Guenea (sp?) pig. This thing sure can eat. It loves fruits and vegetables.

This is Sango the Hamster, also my oldest daughters. This thing is alive, but I never see it do anything but sleep.

You can also buy birds with a metal head on them shoot of a fire cracker and throw the bird. This helps to tell if they are gun shy and the metal head keeps them from picking it up and shaking it. (Beats the crap out of the dogs head if they do). My retriever is really good about this
Click to expand...

Thats a good idea. So far she is not gunshy. The second day I had her I took her out with the .22 pistol...made her sit next to me and fired off a few rounds. She could care less. I will take her to the range here shortly and slowly bring her closer to the shotgun. I am guessing she will be ok by the way she acted already.

I will have to look for those birds.
W

My tarantula is a antiles giant pink toe tarantula still not huge and my snake is just an albino corn snake that is about 17 inches give or take.

I used to have tarantulas I had a Rose Hair and a Zebra tarantula. I want to get a snake some day but I want a ball python.

Modemaic what kind of dog is Gus? Looks like a huskie or some kind of sled dog.

Here are a couple pics of my boxer nala. 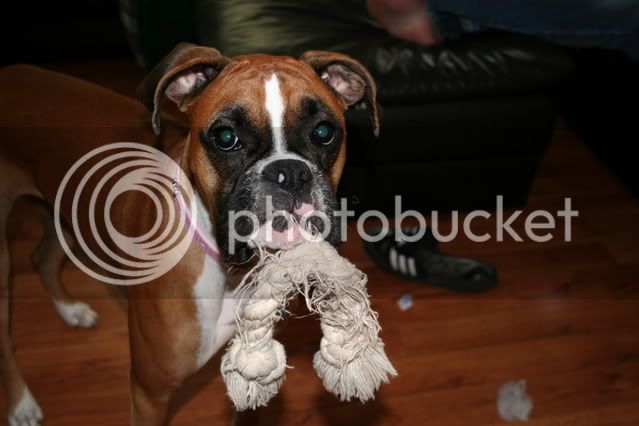 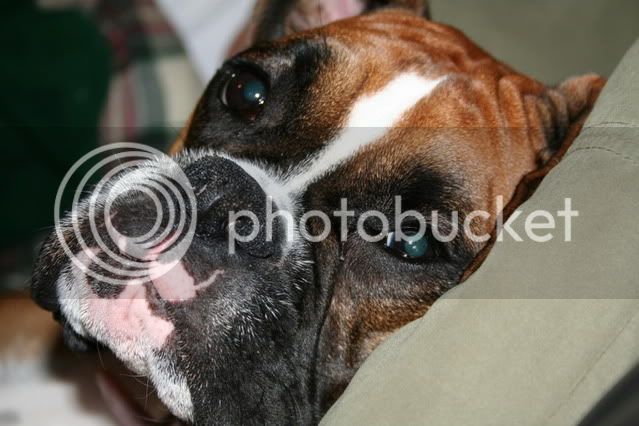 My aunt and uncle have 2 boxers.

Big Bad VooDoo Daddy one of our Maine Coons. Weighing in at 29 lbs. Hobbies: Pushing things off of flat surfaces, watching birds. 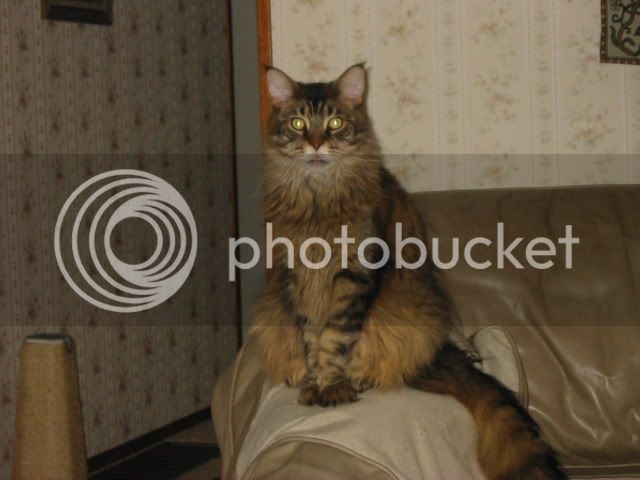 You need something to show the scale of those cats Al.

They are the largest house cats I've ever seen.

I hope to god my cat will get that big!
Anyways, here is my baby gato! 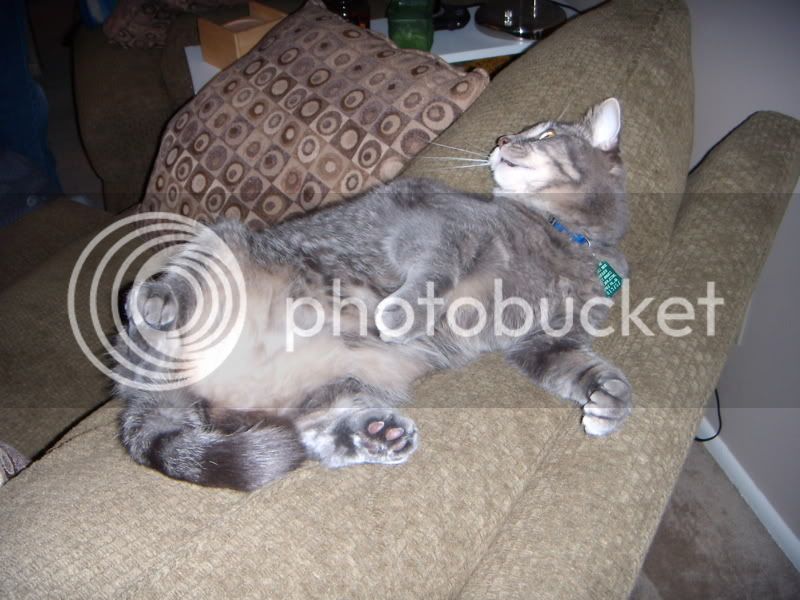 Excuse the hideous human but the G/F loves pictures of me and that kitty!

and my old Jacksonii Chameleon!

W
What kind of coral is this?