Still have 3 in a tank together with a queen and pink tail and cleaner shrimp. Here are 2 pics of the smaller blue that has changed the most. Also less light and cheaper camera this time so color sucks in comparison: 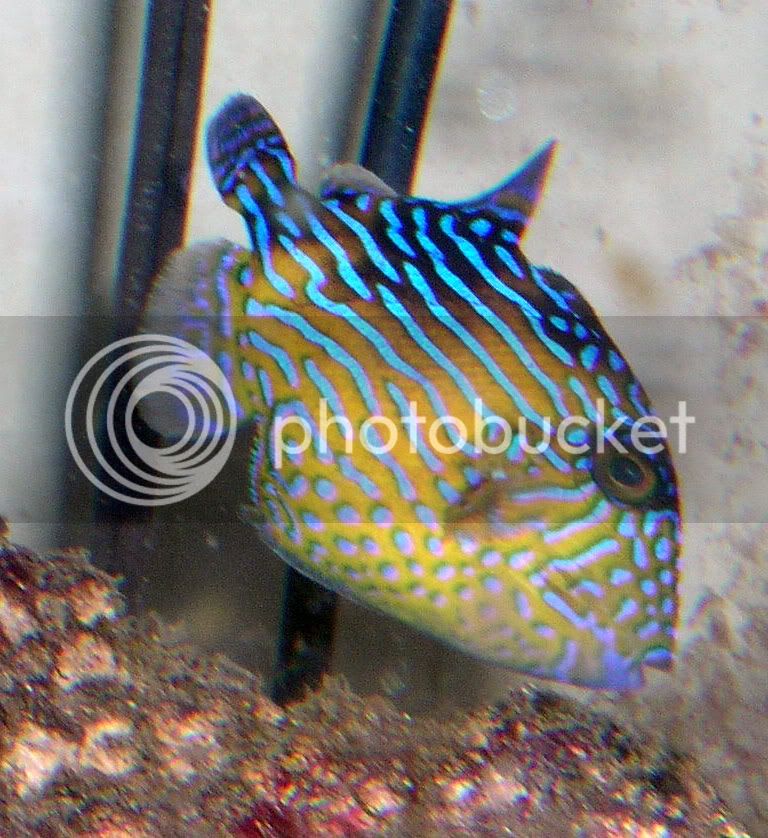 Neat fish. It will be a different fish in a few more inches.
D

I hope it keeps the bright yellow trait which few found in the stores around here have. They all turn to the polka dot yellow/beige and dusty blue.

For instance, compare these two: 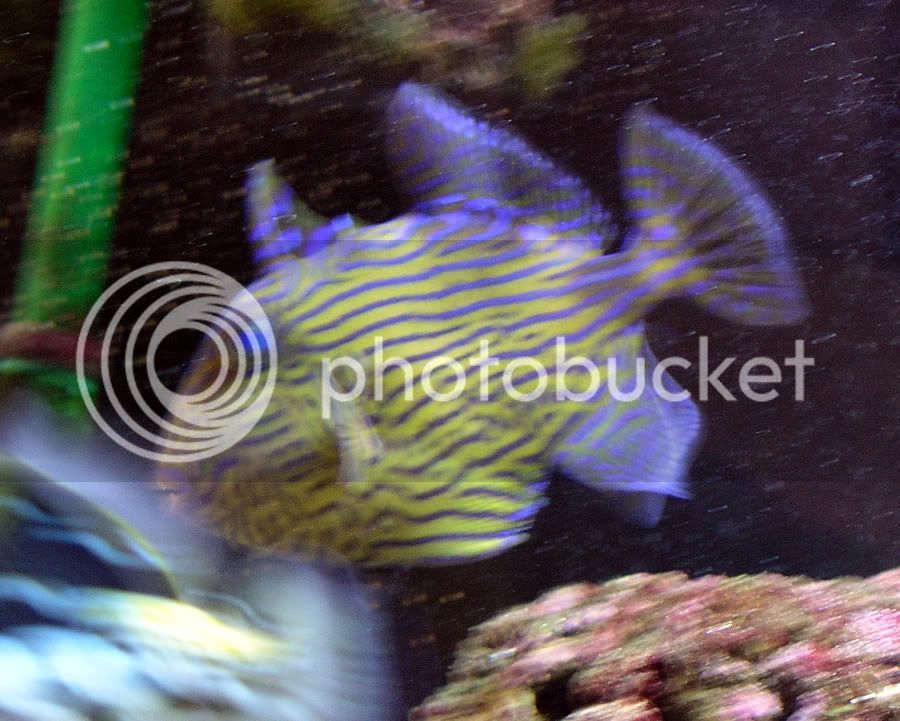 how long does it take for these fish to really transition into that beautiful blue coloration?? I bought a blue line no bigger than the palm of my hand head to tail last summer and put him in my 220. Well, in one year, he is now pushing 7 inches or more head to tail and is fat and healthy. But even though he is that big, he still has that more yellowish coloration like the pic above and even those dark "baby" blotches. I cant wait for him to get more blue in him. how big is that mostly blue one above?

Dukey what are it's tankmates, and how's it's temperment so far?
D

Dukey, can you take a pic please? The top blue was about 6.5" in that pic, it died from oyster meat in the following month or two at 7". You may have the kind I wish I had with the predominate yellow body. If you could get a pic and post it, that would be great.

Here is a pic of a more yellow one from the web, it is exactly what I am looking for:

Where as this is more what my biggest of the 3 will likely look like when bigger: 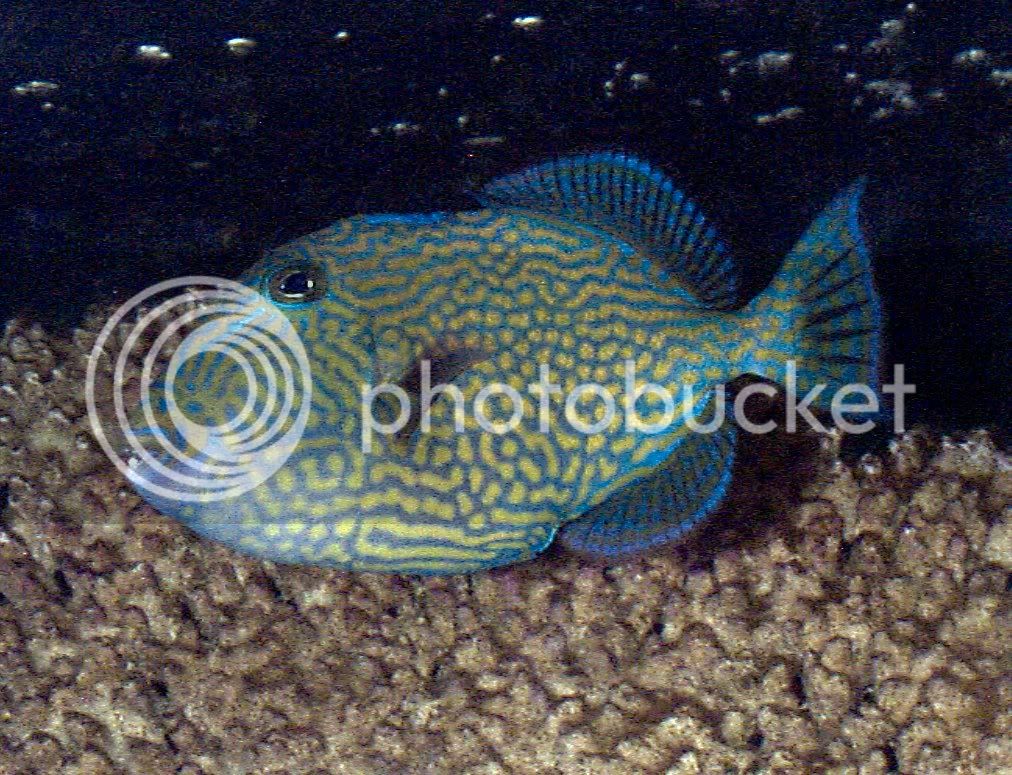 Here it is currently: 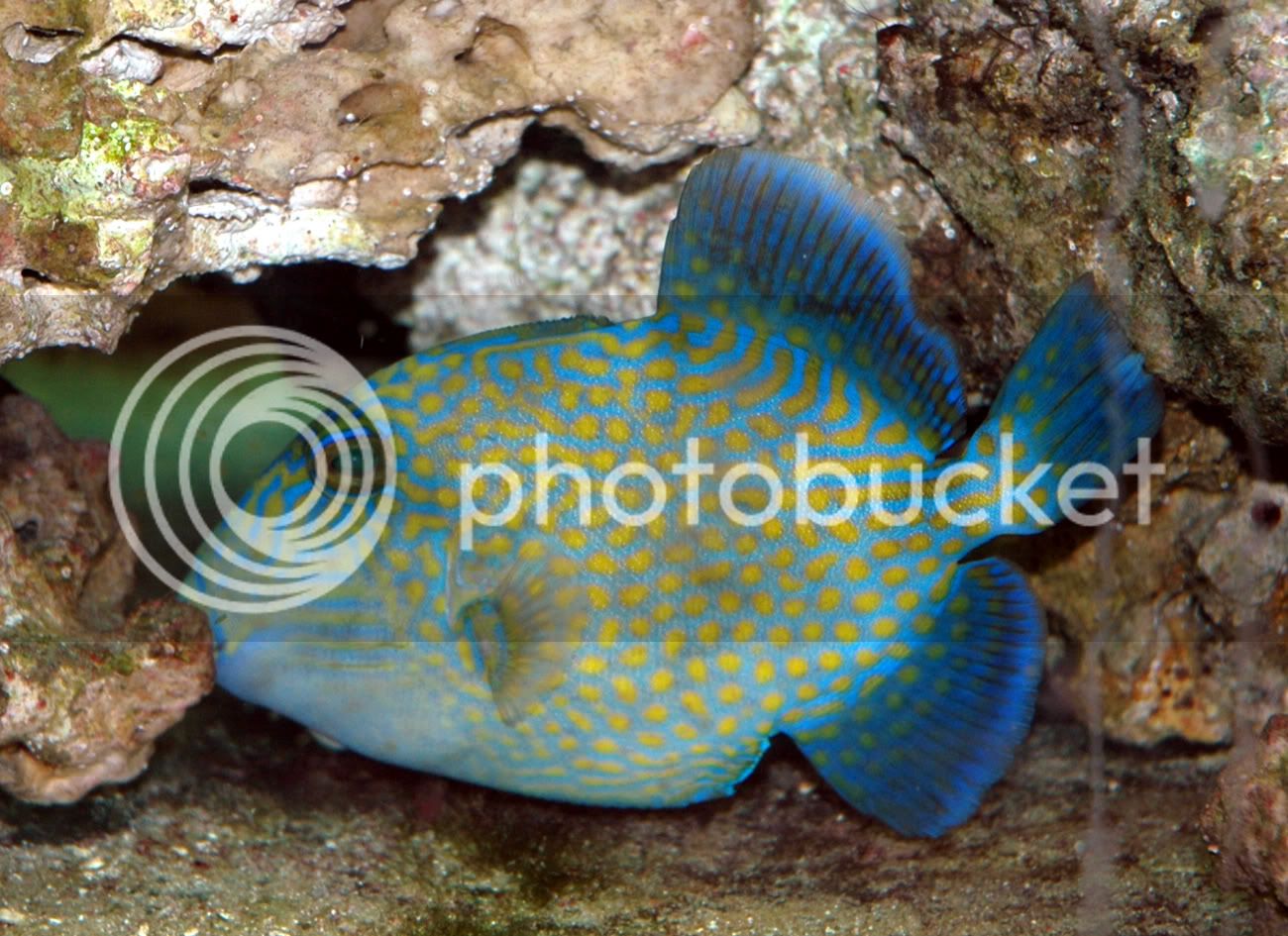 Premium Member
Lookin nice, I hope you find that yellow style, never seen one before and that picture is awesome! It must be source location don't you think? The Sri Lanka (I think that is what they are) specimens all have the boldest yellows when I have seen them.
D

The store in rocklin has a sri lanka one now that is about 3.5" and will look like the larger one pictured that is blurry (cuz it was moving and I didn't use a flash to capture its real color) for $80! Sad thing is that they don't feed it anywheres near what it needs and is quite emaciated. It will die before it sells. Idiots! If they would go for $60 I'd take it, and they've had it for weeks, but they won't.

Premium Member
They usually lose that yellow color, like you've noticed. I've only seen one that kept it.
What are you going to do with them when they get bigger? That 135g isn't big enough for one adult blueline, let alone 3.

I only plan to keep them if they get the right coloration. Otherwise I will sell at least 2 of them.

<a href=showthread.php?s=&postid=10467222#post10467222 target=_blank>Originally posted</a> by Wolverine
They usually lose that yellow color, like you've noticed. I've only seen one that kept it.
What are you going to do with them when they get bigger? That 135g isn't big enough for one adult blueline, let alone 3.

<a href=showthread.php?s=&postid=10466839#post10466839 target=_blank>Originally posted</a> by danorth
The store in rocklin has a sri lanka one now that is about 3.5" and will look like the larger one pictured that is blurry (cuz it was moving and I didn't use a flash to capture its real color) for $80! Sad thing is that they don't feed it anywheres near what it needs and is quite emaciated. It will die before it sells. Idiots! If they would go for $60 I'd take it, and they've had it for weeks, but they won't.
Click to expand...

yep idiots. I just got back from there (I'm visiting my parents in Auburn) and I don't give that trigger more than a day or two. It is face down in sand and in a very sad state, depressing because it is such a beautiful fish.
D

I just called the store to see how the fish was and Kyle, the acting main guy, said it wasn't looking too good today and that the other fish in the tank were picking on it. I mentioned how it looked skinny as a rail yesterday and asked why. He said the people in charge of feeding weren't doing a good job and he has moved it into another tank and is feeding it krill and silversides to fatten him back up. I left it at that, I just wanted to hear what he would say........

Premium Member
yah, it was in it's own tank when I saw it, not in the one where it was listed. and the krill it was supposed to be "eating" were up stuck to the overflow grate as he sat on the bottom with his face in the sand.

too bad he didn't just outright offer it you at wholesale or something - I can't believe they would pass on your 60 bucks just to let it die and get nothing. When I bought that jumbo Undulated it had flukes so I got it for 50% off. Then I was able to treat it properly like they obviously weren't doing.

all this blue-line hullabaloo you've stirred makes me want to go find a nice one now. if I only had the room...
D

I just sent an email to the guy that got me the two smaller ones that were supposedly from SL to see if he can get the 4-5" ones in now. I also sent him the same 2 pics above to illustrate the colors we're talking about. I'll let you know what he says. Exotic has a couple of the regular ones in, one about 3" and the other 4.5".....don't remember the prices though.

Premium Member
I'll be hitting them up ( and O street) tomorrow on my way back to Napa - heck maybe even capitol since I haven't been there in forever. Hopefully they will have some nice stuff in this week to look at.

The septmeber budget will allow me to start shopping for tank upgrades - so excited - just have to be patient until then. But I will also let you know if I see anything worthwhile in my travels.
D

The bigger of the 3 died yesterday. I tried to save it by relocating it and it didn't take to its new place so I brought it back, but it just didn't work out.


At first it would go and give the queen trigger some grief, but eventually over a month or so the queen out grew it by an inch +, yep pretty quick, and then the queen would charge the blue line. After 2 days worth of what seemed mild, and the blue line still eating, I made the move. Perhaps not fast enough, but I didn't sit back either, most things resolve in a day or 2 if it wasn't an immediate problem with the fish's introduction.

That yellow morph is nothing short of amazing! Too bad they get big and bland as adults, or I'd definately have a species only tank.
You must log in or register to reply here.