My LFS just got in a very small wrasse this afternoon that their sheet says is a Pearl Wrasse, however it looks nothing like any of the Pearl Wrasse photos I can find.

I want to take it home, but I'm not going to until they know it's eating/healthy and until I have a definitive ID.

No photo, but I'll do my best to describe it.

It has the same body shape as a six line wrasse. The main of the body is three horizontal stripes. Two are on the dorsal/ventral side, one is straight down the middle. The middle stripe is a bright pearly white, while the other two are black and meet at the tail. The dorsal black stripe and tail have several electric blue rings on them.

It's very cute a pretty, but I want to make sure that it's reef safe and healthy before I decide to bring it home.

Thanks in advance for any help.

I think I found it...maybe... this is similar but there was black on the tail as well.

Okay so I'm doing some reading here and it says they have pretty limited diets and have strayed success in the hobby.

I do not have anything in my tank to compete for pods etc... so would it be worth a try, or should I steer away from getting it?

That pic looks like a Pearl Wrasse to me. If the only difference between the pic and what you seen at the LFS was a little more black on the tail it might just be slight color variations due to geographical areas.

If it is a Pearl Wrasse I would recommend you actually see it eat before you purchase it, they are not strong shippers or generally good eaters. I have heard of people having success with them, again it's hit and miss much like Leopard Wrasses...

Right. There must be two different wrasses considered to be a "Pearl Wrasse" because one I found is blue and green, and then this one was labeled as a New Guinea wrasse on wetwebmedia.

Yeah, I'm not going to purchase it until I know it's eating. That's the main thing Dennis, the owner of my LFS, told me to wait on today. He wants me to wait at least until tomorrow so he can try feeding it tonight and in the morning.

Other than that, it appears fairly healthy though. No visible signs of torn fins or injury. It's got a nice fat belly on it. The only thing that was worrying me a bit was it looked like it was having some buoyancy issues. Dennis said a lot of wrasses to that when they first come in. Partly why I decided to wait... it had only been off the airplane and in their tanks for about an hour once I got there. If it's looking good tomorrow and they tell me it's been eating, I'll probably bring it home. My QT is actually teeming with pods right now and I've been wondering what I should do with everything in there. Do you think it would be best to QT it? The little guy is only about 1/2"-1" long, so I want to do what'll be best for it.

Well, I bought the little guy today. He was looking so much better and they fed him some live brine shrimp while I was there. He was gorging himself

Just got him acclimated and in my QT tank, and it's already actively grazing for small creatures to eat.

Not the best photo, but you get the idea. 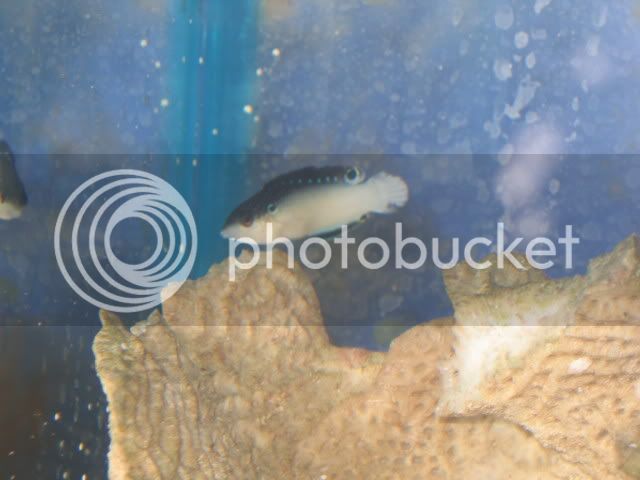 What kind of wrasse is this?