is this bad? sps touching

Hi everyone I have these two sps corals coming close to having a showdown. One is a fuzzy "blue" and the red one is a "red planet". Are they ok or do I need to intervene?

Someone will win, and someone will lose. If you can't move it, frag it.
6

From what I understand they are both acroporas but my friend tells me the red one is more aggressive. I've had the fuzzy blue one for about 3 months and it's been very passive so far.

bjensen1253 said:
Someone will win, and someone will lose. If you can't move it, frag it.
Click to expand...

Do you think the loser colony will be completely killed or just dominated?

I like the idea of letting corals touch for a natural look.

If they are that close & haven't waged war yet then your probably ok.
T

Team RC
The winner will continue to grow at the point of contact, the looser will not but the rest of the looser colony will be fine.

salty joe said:
Do you think the loser colony will be completely killed or just dominated?

You can let them touch and see what happens. The loser will develop STN at the point of contact plus a few millimeters, but the rest of the colony will be OK. The area of STN will develop algae, and kinda looks ugly/dirty, so I usually frag the ends off both coral. One unusual thing that happened at one time was that my Acropora yongeii did battle with the adjacent Acropora tenui, the tenui lost and the A. yogeii started to grow on the tenui bare skeleton!

I subsequently transferred the large tenui colony to another rock to give it room. I must have dropped a piece of it, because a new tenui colony started to grow between the A. yongeii and an adjacent A. millepora. Just for fun, I trimmed the larger colonies to see if the newborn tenui wil grow, and it has!! Here's a photo of the baby tenui growing between two giant Acropora colonies: 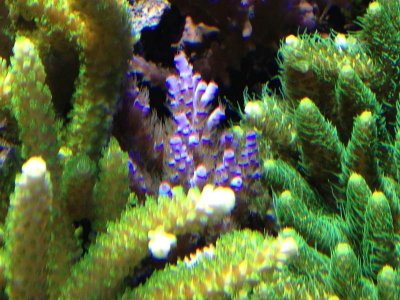 Make sure they sign a prenuptual agreement before they touch. Honestly, time will tell.
U

Just frag it because one of them will die as others have mentioned. Then you have something to trade instead of a partially dead branch.
You must log in or register to reply here.