o obtained a very small and bleached out mag a few months back.. tried to give it away locally knowone wanted it.. so it had to live under pcs for awhile and now is finally under MH.. here are then and now pics..
beginning.. 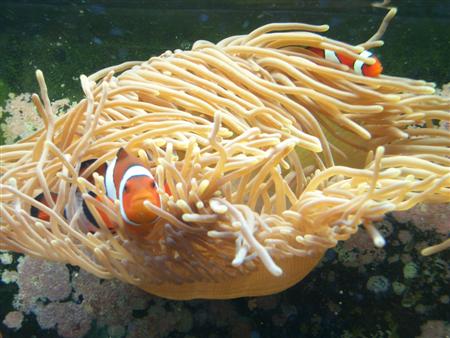 and now..look at the difference in color..night shot not fully open, when open around 8 to 10 inches.. getting bigger everyday, has not lived under optimal lighting buti kept it alive through heavy feedings and water quality. i think its awesome..this is only the side of the mag.. its a lot bigger..

Premium Member
sweet. just goes to show you, these guys can be awesome and hardy anemones once they get past the initial introduction/acclimation period. Congrats on your success so far- best of luck.

Premium Member
Fantastic accomplishment. How long has it been in your system now and what are you feeding?

i have had it since september.. it lived under pc's until about two weeks ago. now its under a 250SE MH 10K.. mainly i feed silversides, cyclopeeze, mysis, and it catches lots of flakes.. occasionally it gets fresh squid, salmon, clam, raw shrimp, scallops, but i have noticed an occasional negative reaction to the fresh foods, so i have since stop using them..
You must log in or register to reply here.