Premium Member
Just wanted to share about my recent order from Diver's Den, pretty happy about it.
Everything was set for my order to come on Saturday, but things didn't work out how I had hoped. Went to see my Doc (( just had knee surgery )) and he didn't like how my lower leg looked, had to spend the weekend in the hospital to clear up the infection.

So, before I went to the hospital I had my dad met me at my place so I could do my best to show him how to acclimate the fish, anemone and zoa rock. Felt that he could do it, but he doesn't know the little things to look for. Plus, it was super cold here this weekend.

The FedEx man came to my place around 9ish, my dad said that the driver was really careful handing him the box, and that he made a comment that he kept the package in the front of the truck, and made it his first delivery so it wouldn't get cold. Got to love drivers who care.

Dad called me at the hospital to let me know that they arrived and were in the buckets being drip acclimated. Had him put the Potter's angel and the zoa rock in the tank I wanted them in. But, due to me not being able to move some stuff around I had him put the LTA into my 29, felt it was the safest place for it to be while I wasn't around. The LTA still looks a bit stress, but otherwise good. And the potter's....will he was swimming around the tank, when I got home today, like he owned the place. And he already is eating.

Here are some bad pictures I managed to take of the potter's angel and in one of the pictures you can see the zoa rock. Will try to get a picture of the LTA later on (( that tank is upstairs, and I don't like stairs right now. )) 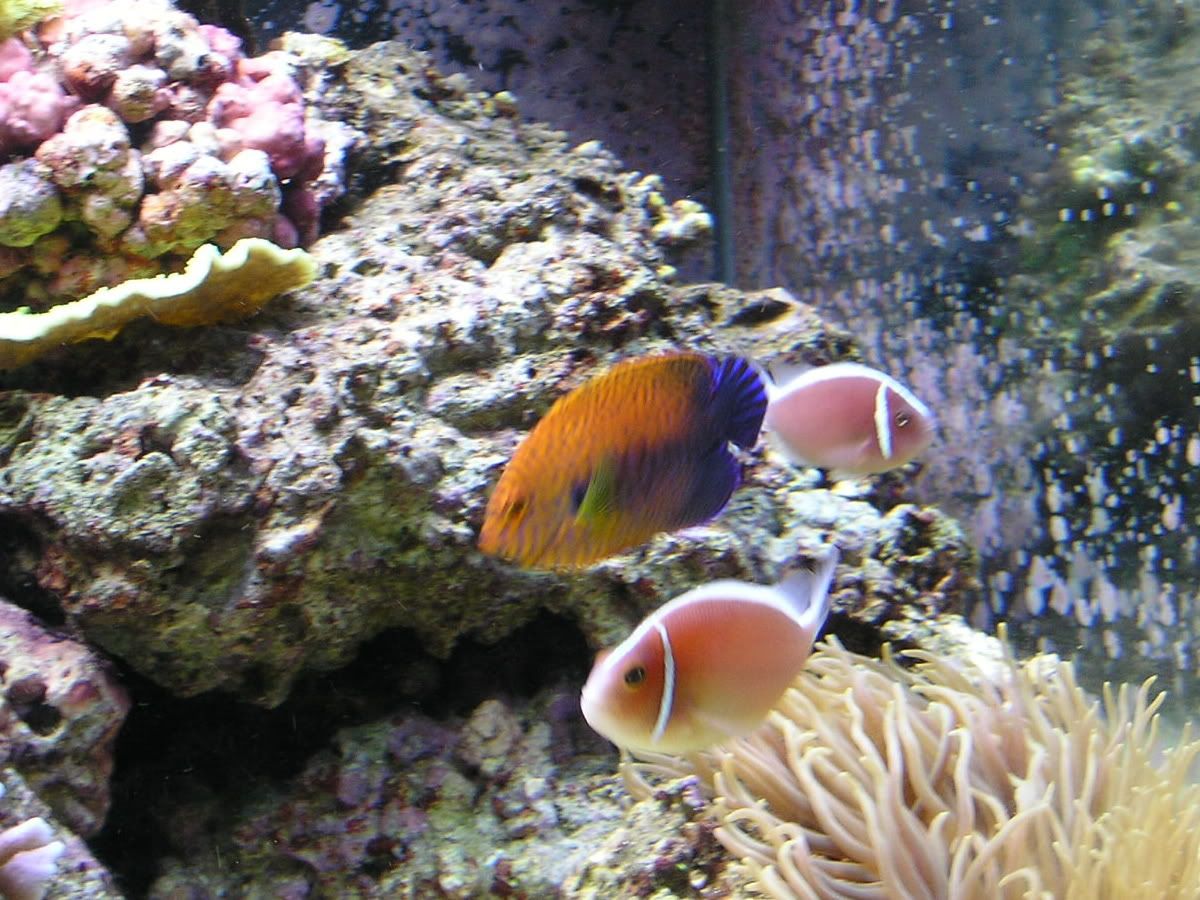 And the rock in the back ground came from you guys too -- got a lot of cool stuff on it. 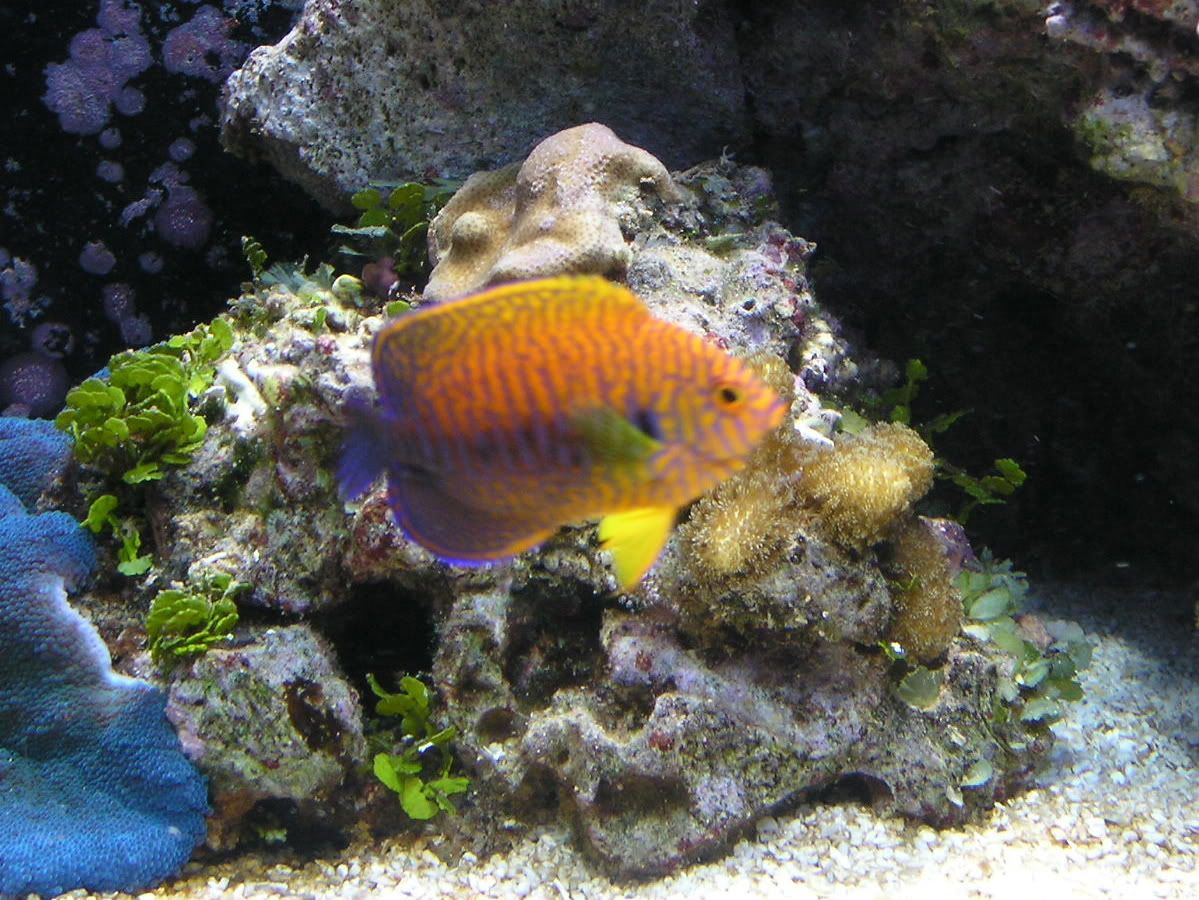 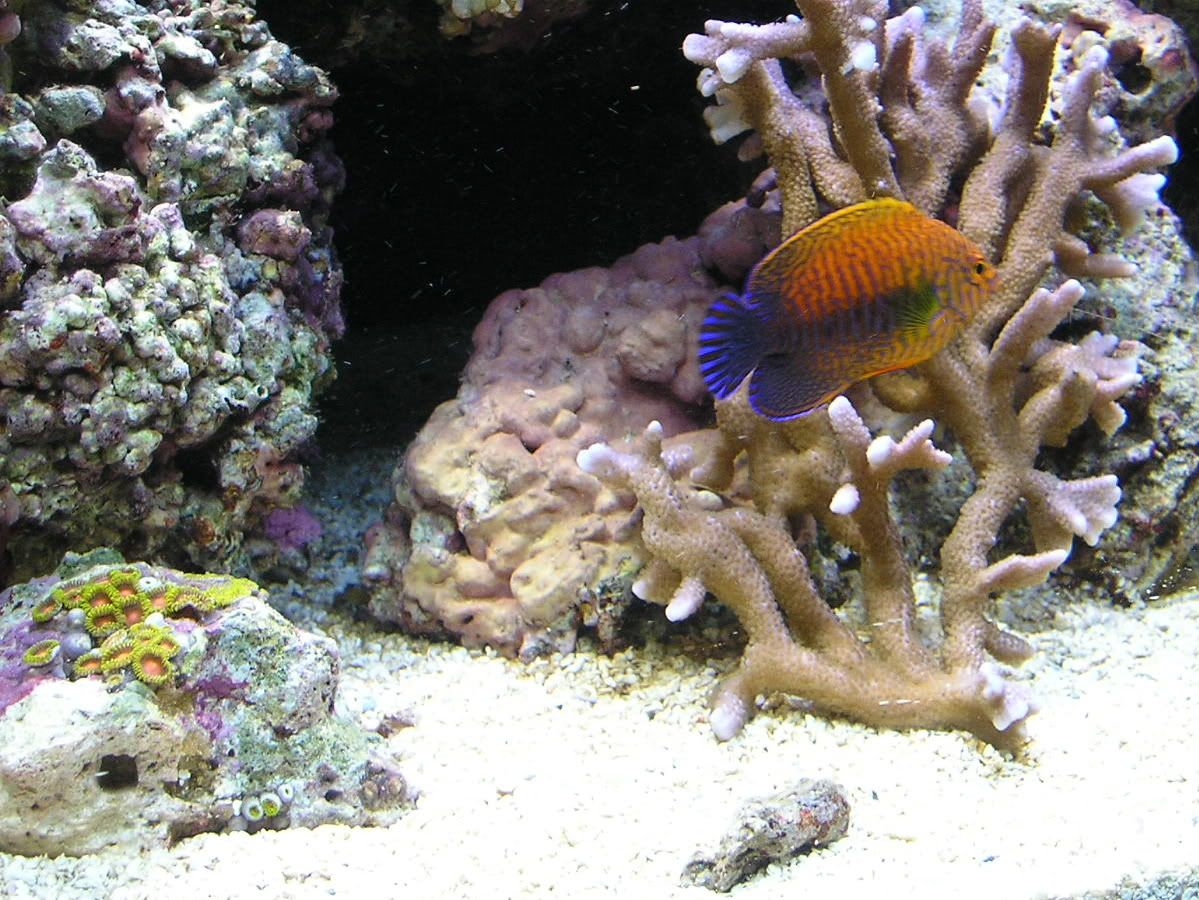 Thank you for ordering with Live Aquaria and for posting your photos for all to enjoy! ItÃ¢â‚¬â„¢s fun to share your enthusiasm for your aquarium! We will pass your compliments regarding your Federal Express Driver on to our Federal Express Representative, thank you for telling us about his careful handling of your order.

We hope you are soon fully recovered and wish you continued success with your new arrivals.

Premium Member
Thanks Donna, yes, please pass that along to your FedEx Rep., I've always had good results with my FedEx drivers.

Will try to get a picture of the LTA later on tonight, the color is a bit off, but could just be from the stress of shipping.

Saw the Potter's this morning and he was out and about showing off as I stood by the tank -- could never tell that I just got it.

Any problems with the potters and your corals?

Premium Member
It has only been in the tank since Saturday, but so far so good. I haven't seen him pick at anything besides the rocks. The PE on all my SPS appears to be the same as it was before I got him. Only have one zoa rock in there (( which came in the same order )) and it seems to be doing great. Will have to check when I get home from work.

Premium Member
Thought I would update.

It has been about 7 weeks since I got the Potter's. It doing great, always out and about. Picking at the rocks ( and only the rocks ) eats anything that I put in the tank.

So, here are some pictures.

( got the blue Haddoni from Diver's Den also, along with must of the rock ) 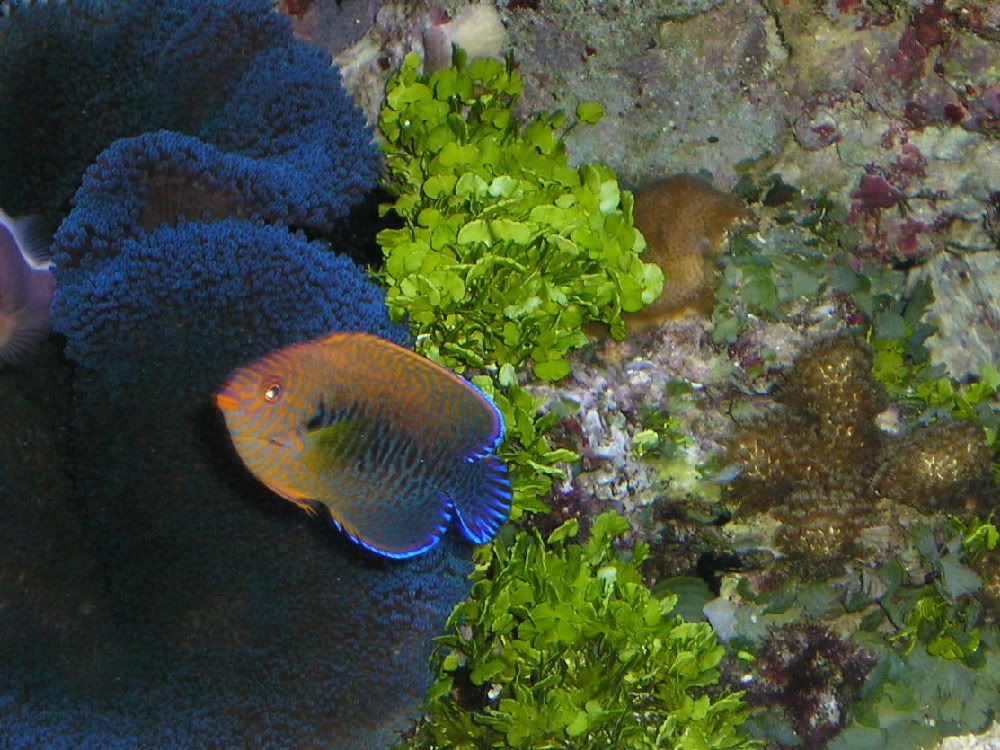 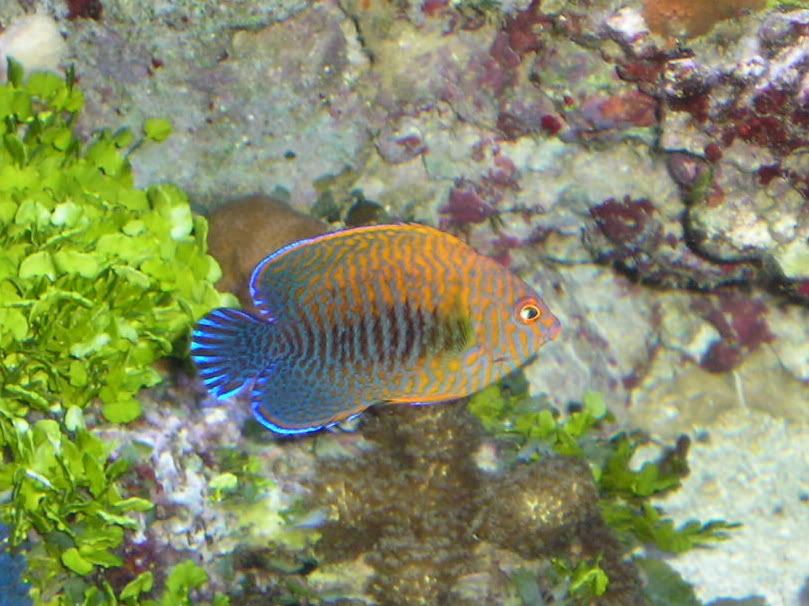 Potter with my wrasse ( let you guess where I got it ) 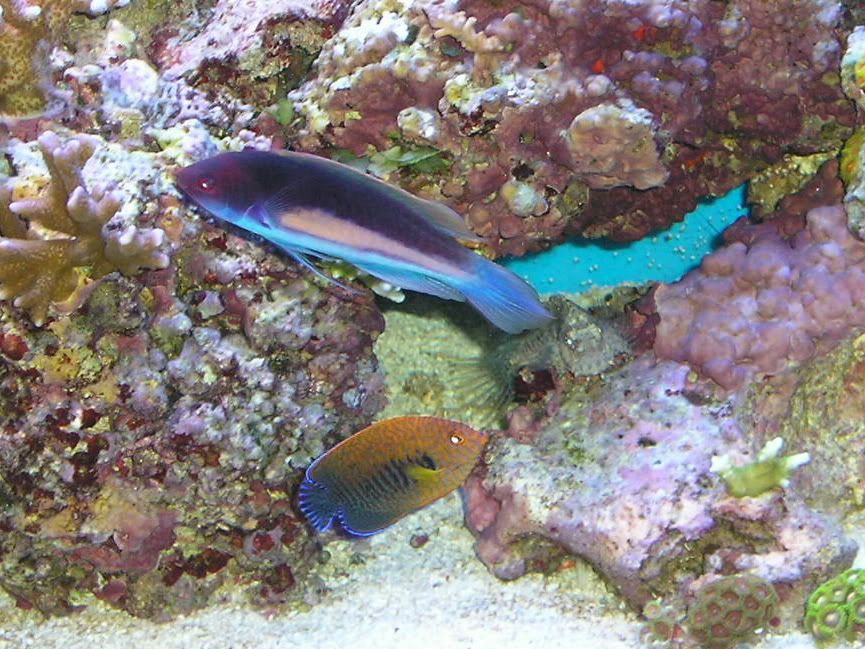 Lastly the zoas that I got with this order 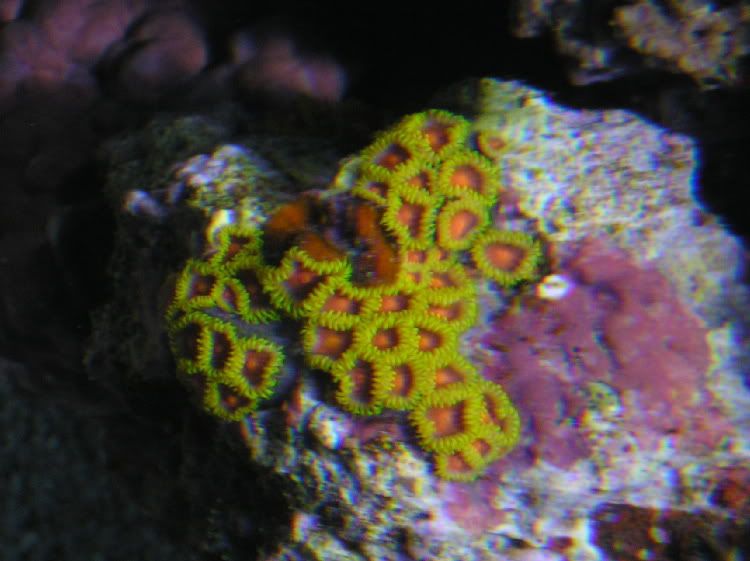 wow what an amazing feddex delivery man/woman!!! I would've given him a huge tip. We need more of those kind of caring people in this world, PERIOD.

<a href=showthread.php?s=&postid=12018799#post12018799 target=_blank>Originally posted</a> by Kinetic
wow what an amazing feddex delivery man/woman!!! I would've given him a huge tip. We need more of those kind of caring people in this world, PERIOD.

I know I thought about that too -- really should have. And had a chance to the next weekend when I had more stuff delivered -- but was on pain killers and not thinking clearly. Was the same driver again, he asked if I was doing better and if I needed any help getting the box all the way inside.

And thank, love the all the fish. Came in in great shape, as always.

Thank you for your post. We appreciate you posting pictures of your beautiful Wrasse and the other specimens in your aquarium for all of us to enjoy. We are glad to hear that the Wrasse is doing well after the acclimation to your tank. His coloration is spectacular and he looks very healthy.

Premium Member
The wrasse has actually been in the tank for about 7 months now, the potter's angel is the "new" one.

But, I am glad to share, and to let you know how great everything that I've ordered is doing.
You must log in or register to reply here.

HELP!! LiveAquaria shipping disaster, can you help me identify this guy?
2 3