Got bored and posted this on a different club forum, figured id post here too


(looking for GARF bonsai if anyones got it) 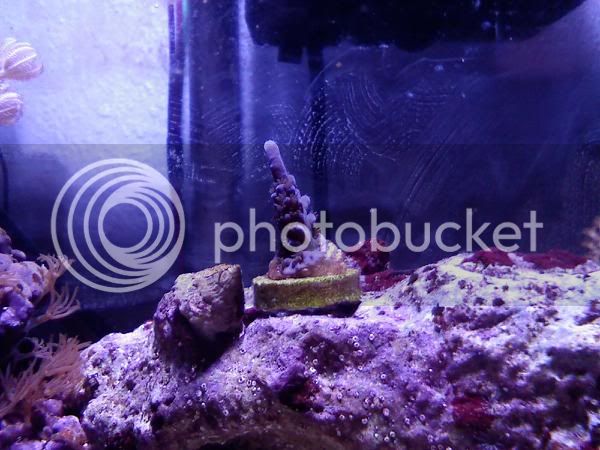 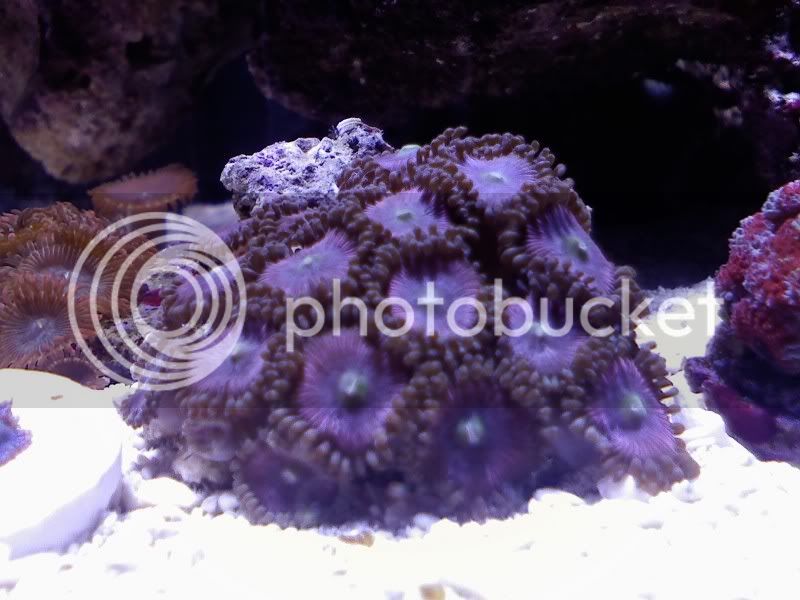 tubbs birdnest (colored up since i purchased it and already began growing a new branch : D ) plan to cut the nub off the bottom and glue it soon 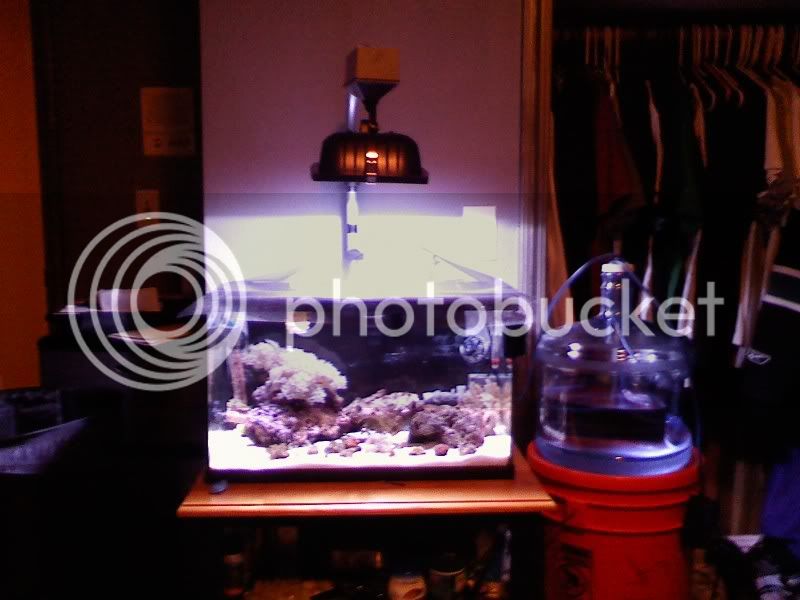 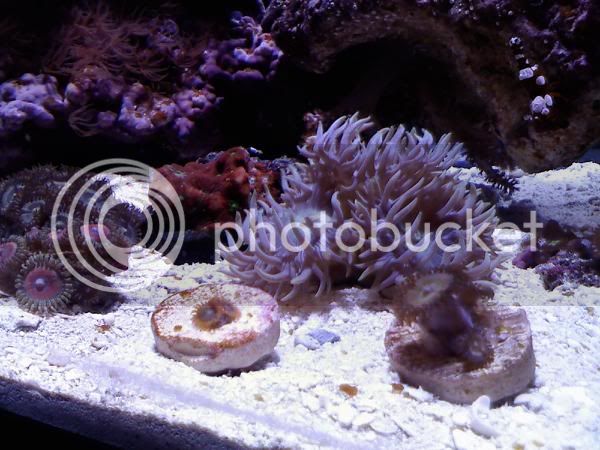 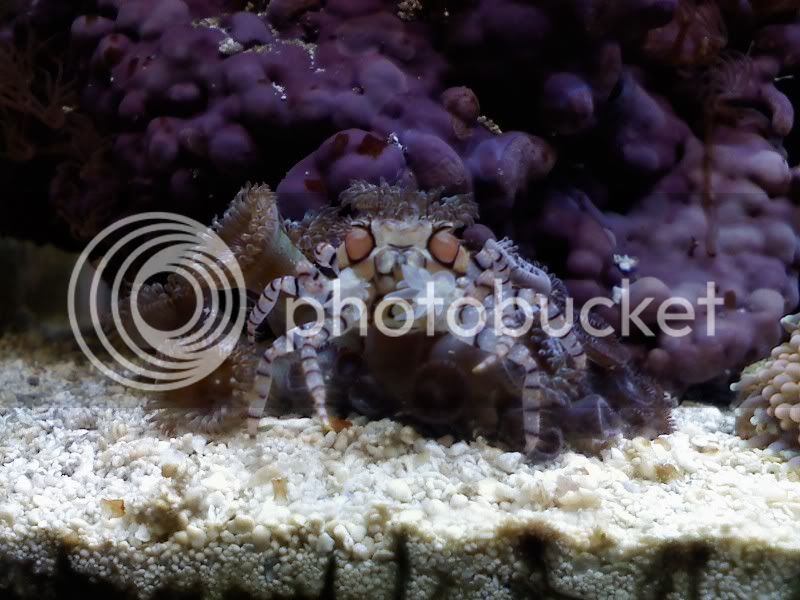 new pom pom crab : D (picture from 5 gallon) her nems are much bigger now, and she has a huge egg sack

I also have flat worms : ( i cant figure out a good solution, its not worth the risk to me to use flatworm exit, I want to get a sixline but im worried for my sexy shrimp.

the tank started october of 2008 while attending sonoma state university.
It has been moved home for christmas back to school and then home for summer. It survived a week and a half with me attending to it once during spring break and also had a poweroutage of 12 hours at that time. Its a resilient little bastard haha


Plans
I recently bought a birdsnest coral because i had tried both soft corals as well as lps corals, After a week the coral had already gained better color as well as show signs of growth. I felt due to my early success of this coral i would go for a more challenging coral in an acropora. I bought a cali tort acro today from the same reefer that sold me the birdsnest.
I plan to buy maybe 1-2 more frags possibly a millipora and another acro (more expensive one though)
Id really like to get an encrusting montipora however i dont really have much rock so a monti would take over the tank so i might just get a small frag for cheap and try and see if it will grow on my sand bed with empty frag discs next to it.
I also plan to buy at least 1 more expensive chalice (miami hurricane is really cool to me or possibly pink boobie)
All sps will be kept on the rocks and most if not all soft coral will be kept on the sand unless i decide to let things just grow on its own will all over the rock im not really sure yet
J

ps this started as a 5.5 gallon, it was upgraded in june i think? Or july i forget

Nice tank Justin. You've done a good job making use of available space. What challenges have you faced with that tank size? I had a 10g salt tank many years ago and I found it was tough to keep the temperature consistent, and that disease spread like wildfire. I was only doing fish at the time so I can imagine how much more difficult it would have been to try sps.

I've got a frags of some plating monti caps if you'd like one - Idaho Grape and Orange.

By the way, I often find people don't respond to "check it out" posts unless there is a question of some kind in there. It can be irritating, I know.
J

haha nah i just was like O_O why would no one comment this if someone was just complaining in the other thread about no tank journals. So far my biggest obstacle has been my impatience and lack of room. I am really impatient and instead of shopping around i often buy something even though i can get it cheaper somewhere else. I also made the mistake of getting everything at w.e that place in cotati is called. I forget the name since im not at school and going there for water anymore. They ripped me off huge on everything i bought.


I run my tank at about 80degrees because anything less and i get large swings. I find in the summer on the hottest days with my halide it gets to only 83 and thats if i forget to turn my fan on high in my room. My half of the house has no air either cuz it broke so as far as temp swings go ive done a good job with that.

My main problems have really just been keeping corals healthy. I struggle a lot with lps corals. Its difficult in such a small tank to really maintain the right levels especially because im so new to these tanks i had to learn everything i could about mg alk and ca as fast as possible due to a melting micro. I was told with a tank this size that water changes is enough. Unfortunately it wasnt in my case and i used shitty salt.


Basically my largest struggle is stability. I am a college kid, i get lazy and then bad things happen. I finally got an auto top off which has helped 10 fold and its probably been the most important purchase ive made with my tank. There is no longer that guessing game of topping off and i can finally leave for spring break and not worry the tanks going to get pwned.

Ive just recently gotten all the needed test kits and the kent nano two part. With the increased demands of my new sps love and also the lps i have i need to start dosing the tank a long with the bi weekly 1 gallon changes i do. This will be a new chapter in my reefing experience as i need to learn how much and how often to dose both parts a and b to keep a stable system.

Lastly the most Difficult problem is a two part thing. I move the tank and im in college. I move the tank to school for 3 months, home for a month, back to school for 3 months, home for summer for 3 months, rinse and repeat. Its really stressful on the tank and everytime things really get going awesome its about time to move again. The worst is christmas break. The one advantage of this however is i have become really good at moving tanks. It took a few tries but im always looking for ways to increase the success of the move as well as decrease the stress on my system. Finally the college aspect. I have a 34 gallon redsea sitting empty in my room. I really want to sell it the more i get into the hobby because i want a larger tank. Theres my problem. I hate having a 10 gallon. I cant really glue anything down or let it grow as i always move and its easier to just pick stuff off the sand and bag it vs putting it on the rocks in the buckets. I am quickly running out of room already and i really just want a custom cube at least 50+ gallons. But that will come when i graduate. Until then i will enjoy my 10 gallon which in a year may become a 15-20 shallow cube if i get into a house off campus and live more at school during holidays and summer. Also imma have to pass on the monti. AS much as im dying to get a rainbow and stuff like that i dont have the room and a plating one would quickly outgrow and shade my tank : /

Looks nice. I wouldn't worry about flat worms unless they're the type that eats corals.
J

i cant tell if they are, they chill all over the place, corals dont seem to be effected however my kenya tree (not that i like or care about that coral) has them all over the base which makes me think they may be snaking
You must log in or register to reply here.