What fish to get?

Hello, i have a 29 gallon fish tank set up and i want to get a goby but which one should i get? i'm looking for one that is colorful and has a personality and it will get along with my fish,
copperband butterfly(taking back to big for my tank )
2 damsels
1 small blueish chromis
1 arrow crab
1 hermit crab.

nevermind im actually just looking for a colorful fish that has personality and survives pretty well..
B

Premium Member
I'd probably not add any more fish. Three is a reasonable number for a 29g, and the damsels might get very aggressive.

well take into count im getting rid of the copperband because i kinda have no choice, and the damsels aren't being aggresive infact they usually cower in corners most the time.

infact i'm thinking about removing the damsels because everyone tells me they aren't a good fish to have..

i had a damsel in my 20 for like a week, end up giving it to my LFS lol

yeah so i thinking of a mandarin goby because they are beautiful fishes, but are they hardy fish?
D

they arnt hardy because they only eat on thing and you need a large supply of pods to keep them.

<a href=showthread.php?s=&postid=11662621#post11662621 target=_blank>Originally posted</a> by fish4lyfe
yeah so i thinking of a mandarin goby because they are beautiful fishes, but are they hardy fish?
Click to expand...

Do a bunch of research on keeping a mandarin... Common belief is that it's not possible in a 29gallon - they NEED to eat live copepods - even if you can convince them to eat prepared food, they won't survive without live pods.

Keeping a good enough supply of live pods to support a mandarin requires a large tank with lots of LR and a refugium...

In my opinion, you'd need at least a 75 gal with a refugium, LOTS of really porus live rock, bunches of rubble piles, and a big pod population to start out with...oh, and no other pod eating fish.

wow what a difficult fish, well smash that idea. Is there any other beautiful fish like that but are hardy and aren't difficult eaters?

Lame sauce, well anywho do you think you could reccommend me to a colorful fish thats hardy and has somewhat a personality?

A blenny!! Mine is an orange spot. 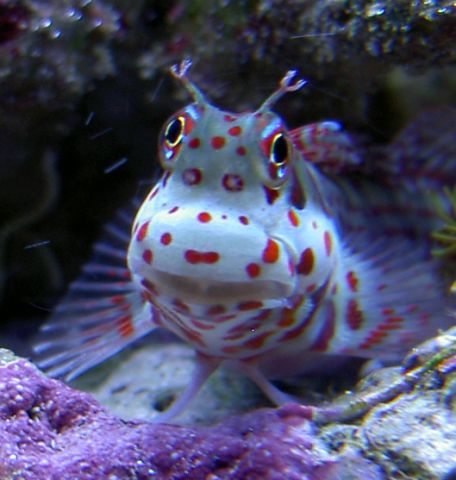 fire fish. But, as said, if you keep the 3 damsels, (the chromis is one too) then you are already maxxed on bio-load.
J

Yeah mandarins are tough to keep most suggest a 50+ gallon aquarium for them and a well populated refugium, you should also have the tank going for atleast 6 months... on the other hand I always enjoy watching my royal gramma very colorful inexpensive fish that is out and about during the day = ]

that blenny looks very cool, but does it have any personality or does just hide all day and never shows it face?

also approx. how much did it cost?
A

aparently they have lots of personality.... but i have never owned one just make sure you have a lid on ur tank... they are great escape artists aparently lol

oh my tank is covered no jumping out for ANY fish :]
You must log in or register to reply here.

Z
what are my options to keep sand surface clean?