Team RC
After watching something puff smoke in the aquarium tonight I decided to investigate. It turns out my blue maxima was spawning. Unfortunately, no pics came out.

Sweet! Sounds like congratulations are also in order for you this evening. :beer:

Makes me wonder sometimes where the song Smoooke on the waaater really came from. :lol:

i would have loved to see the pics.

Team RC
I'm frustrated because I couldn't get my camera to focus on the spawning event. In addition to not getting a good focus, the white puffs of clam smoke had a background of white sand which made it impossible to see what was happening in the pictures- even if they had come out halfway decent.

Looks like this--my Crocea has let loose a few times, only able to catch this one pic a couple of years ago.... 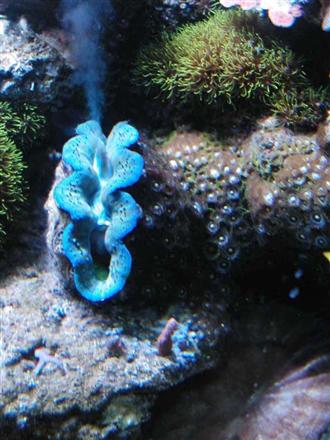 Team RC
Yeah. That picture came to mind. I needed a dark background like that.

Great pic=pure luck--somehow the shutter went off in synch with the spewing with enough contrast to see what was happening.

Team RC
Ah yes- the synchronization. I know what you're saying! All digital cameras have a shutter delay. ARGHH!

I just thought of it: why didn't I try "movie mode" on my camera? Darn it all.

Time to invest in a Digital SLR camera Gary. No delay. You can get one now for under $700. Makes Digital perform like film.

Team RC
A digital SLR! Wouldn't that be nice to have?

lol, yea I wanted a digital slr too.. but I don't have a real job yet.

I have been looking on ebay lately. When a new piece of camera gear that I like comes out it generally is too expensive for me. I wait a year and then find somebody getting rid of one in good shape. Canon has been updating the EOS D series at a rate of a new model every year. There is always that guy who upgrades everytime a new comes out. I just wait and snap up his old one.....Ofcourse it won't be the latest and greatess but its still an upgrade from my standpoint.

I think this is your clams way of thanking you for being such a good care provider...

Ive read past spawning events in you tank articles and am wondering if anything is really stressed out about the event?

Team RC
Nothing was stressed out by this event. The maxima clam is rather small. It wasn't anything like when my big anemones or squamosa spawned, which resulted in really milky white aquarium water.
D

Premium Member
How potentialy damaging is it when a large squamosa spawns. Ihave a relatively large squammy that looks like it is nearing maturity. Gary, how long did it take for you water to clear. Was there any resulting change in water chemistry? Any critters suffer as a result? Inquiring minds want to know.

It probably all depends on the size of your aquarium and it's filtration, circulation, etc.

None of my critters suffered during the clam spawns I witnessed. Most reef spawning activity usually happen shortly after lights out, but I've noticed that clams and many fishes spawn in the late afternoon when the lights are still on.
I've always been lucky enough to have new water ready and fresh carbon on hand during the spawns I've witnessed, but who knows what I've missed!
During a "thick" spawn I (also) crank up the skimmer to "super wet mode" to remove as many gametes that I can possibly skim out as quickly as possible.
The spawning activity of one critter will often trigger simultaneous spawns of other critters. This is probably a greater danger.

FWIW I had a large patch of Caulerpa go sexual on me years ago.
It stressed out my fishes pretty good (rapid breathing.) This was the single most stressful spawning related event I've ever witnessed in my aquarium.
You must log in or register to reply here.