this is a new tank and I added about 100 -150 lbs of LIVE SAND. I had the salt mixed and tank looked clear as empty. I did not wash the sand first and of course i have a silt finish to my sand appearing. it has been about 6 hrs since I added it. I turned the pumps off about 2 hrs ago hoping to let it settle. it has settled some but I still cant even remotely see and image on the other side yet.

what should I do next? all I can see is at the glass it has about 1/8" layer of silt.

in a swimming pool you could flock it but I dont think that would be wise.

You should have rinsed it first, but it's ok....give it 24 hours and it will be clear.

First always pre mix water with salt before adding to display tank. And if it was live sand i would not have rinsed it but base sand i would have. A good hang on back filter is always usefull and will help clear up the fine debris.

If this is a new setup you could turn all pumps off for a few hours but i would just let it run and it should clear up within 24 to 48 hours.
E

These were taken about 9am about 14hrs after pump was shut off. Now what??? I read people say do different things. Some say leave pump off a couple of days and some say leave the pump on. The later makes sense because LQQK at lakes and ponds after it rains but they still have water movement. I have a PS that was broken and I fixed it (XX fingers crossed) and I did not have a pump so"¦. I took the pool pump apart and used it and added a venture make up and seems to work but I think it's not enough bubbles. I could always add an air stone. But in general I might try to add it. The foot print with the redneck setup is too big for in the sump so I might plumb it outside and see what happens. Most of the PS stuff would be another post later.

I just wanted it to be clear today I could see it running. Think I might go to PetSmart and see what they have for filter floss and such to see if I can get the fine parts out. I don't have any extra money at the moment for a HOB filter or skimmer. I'm so glad I did not have the extra money for some LR.

Another question, after I sifted the crushed coral out of the sand I'm left with sea shells of different sizes, tiny broken pieces and LQQKs like I did get a small couple of pieces of rubble. Do I leave the shells in the sump until I can get some LR or take them out? 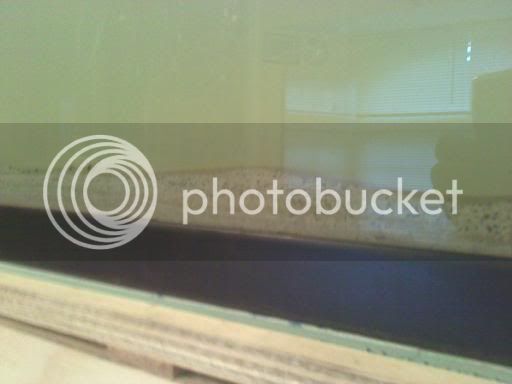 hollister said:
First always pre mix water with salt before adding to display tank. And if it was live sand i would not have rinsed it but base sand i would have. A good hang on back filter is always usefull and will help clear up the fine debris.

If this is a new setup you could turn all pumps off for a few hours but i would just let it run and it should clear up within 24 to 48 hours.
Click to expand...

I would normally mix salt out of the DT if I were adding as normal but this is a new start up so I remote filled the tank with RODI and then mixed the salt in the tank.
E

now that I have this silt in the bottom how do I get it off the sand? I know it's not as simple as adding a cleanup crew now.

Eagle, If you have a sump this is a very easy fix. Go get you a few large filter socks and put them on your drain pipe that goes into your sump. Turn the pump on and stir the sand. The filter sock will help remove all the silt and clear up the water. When the filter sock gets dirty throw it in the wash with some bleach to clean it. Just make sure that the sock is bleach free before throwing it back into action.
You must log in or register to reply here.