Does anyone keep a pair of Hawkfish?

Hi all, wondering if anyone keeps a pair of Hawkfish? I am keen on a pair of Flames and I wonder whether they mate for life, if so how do I get a pair of them? Also would you trust them around Shrimp Gobies and their Pistol Shrimp, blennies? Thanks.
D

I have a pair of Longnose, and Flames in a 240 with several Gobies and Blennies.
The Hawkfish really don't hang out together much.

Premium Member
Hey Zionas, I have a 12+ year old pair of Flame Hawks in my oldest system. Most of the time they'll be in different places but they are often together for a little bit. If I'm not mistaken they are sequential hermaphrodites. I suspect they have been breeding regularly for quite a while as the smaller one occasionally looks like she swallowed a marble and the next day is back to normal but spawning hasn't ever been observed.
Z

Oh hey there thanks for getting back to me. 12+ years is awesome. How did you manage to pair them? Any fighting?

I guess they are like Clownfish where you put in 2 smaller ones or 1 medium and 1 smaller one and the larger one changes sex to become the dominant male / female?
Last edited: Mar 31, 2021

Premium Member
Well, more like dwarf angels where they both went into a QT and were watched to make sure they weren't killing each other and could be easily sepperated it things didn't work out.
Z

I see. I’ll get 2 smaller ones and hopefully it’ll work out. Are they usually hard to pair?

Premium Member
So, so, not as easy as clowns, be ready to separate them so you don't loose one.
Z

I see. Thanks a lot. Do they stay bonded for life like Clowns though?
Z

Is it better to get 2 smaller ones or 1 small and 1 medium?
L

I haven't had a lot of luck keeping Hawkfish with other similar active hunter type fish.
Z

lovely_trequart said:
I haven't had a lot of luck keeping Hawkfish with other similar active hunter type fish.
Click to expand...

Can you elaborate a bit? Would like to know more. Which active hunter fish are you referring to?

Premium Member
To be honest Zionas I don't know of any fish that form permanent pair bonds. I know clownfish certainly don't. In the wild males will mate with different females if their terittory overlaps the terittory of two females.

If they come together at least some of the time I’ll be happy enough.

And I’m only going to have the Flame Hawks, no large wrasses and no lionfish or any other Hawkfish. The Clownfish part is interesting because I always see them swimming together.

I guess I’ll get either 2 small ones or 1 small and 1 medium and hope they start hanging together.

Got my 2 flames quite small.
They fought a lot in the beginning (not really fighting, more like one beating up the other) but after a few months things calmed down. Then a few more months and they have been hanging together inside the sps ever since
Z

paal said:
Got my 2 flames quite small.
They fought a lot in the beginning (not really fighting, more like one beating up the other) but after a few months things calmed down. Then a few more months and they have been hanging together inside the sps ever since
Click to expand...

Nice. How Long have you had them and what size we're they when you got both of them?

Do you keep them with any inverts or other bottom dwellers?

Did they chase each other around and was it more fighting as in posing / mild nipping or did they do damage to each other?

I have had them for about a year. They were maybe 1.5 inches. Those are both just estimates though. My memory is horrible. :lolspin:

My only inverts are some hermit crabs and 2 peppermint shrimp.
I was worried about the shrimps at first, but they seemed fine. It has been a few months since I've seen them though, so it IS possible that the flames have eaten them(!) (I only ever saw them after dark- I'll let you know if I see them again )

The aggression was a bit rough in the beginning. To the point where I actually tried to trap one of them (but I failed)
The aggressor didn't chase the other one constantly, but every time he saw him he would attack instantly and stay on him for few seconds. It looked bad.
Eventually though, the attacks started getting less ferocious and after a while it was just a "scare"; no actual biting or anything. At that point, the weaker hawk started spending more and more time out perching in the open. And then one day I saw them perching together. It all just happened super gradual over a few months.

Added a pic for reference (and ofc, on that one they are NOT together, but... whatever. Maybe I can record a quick vid of them later on ) 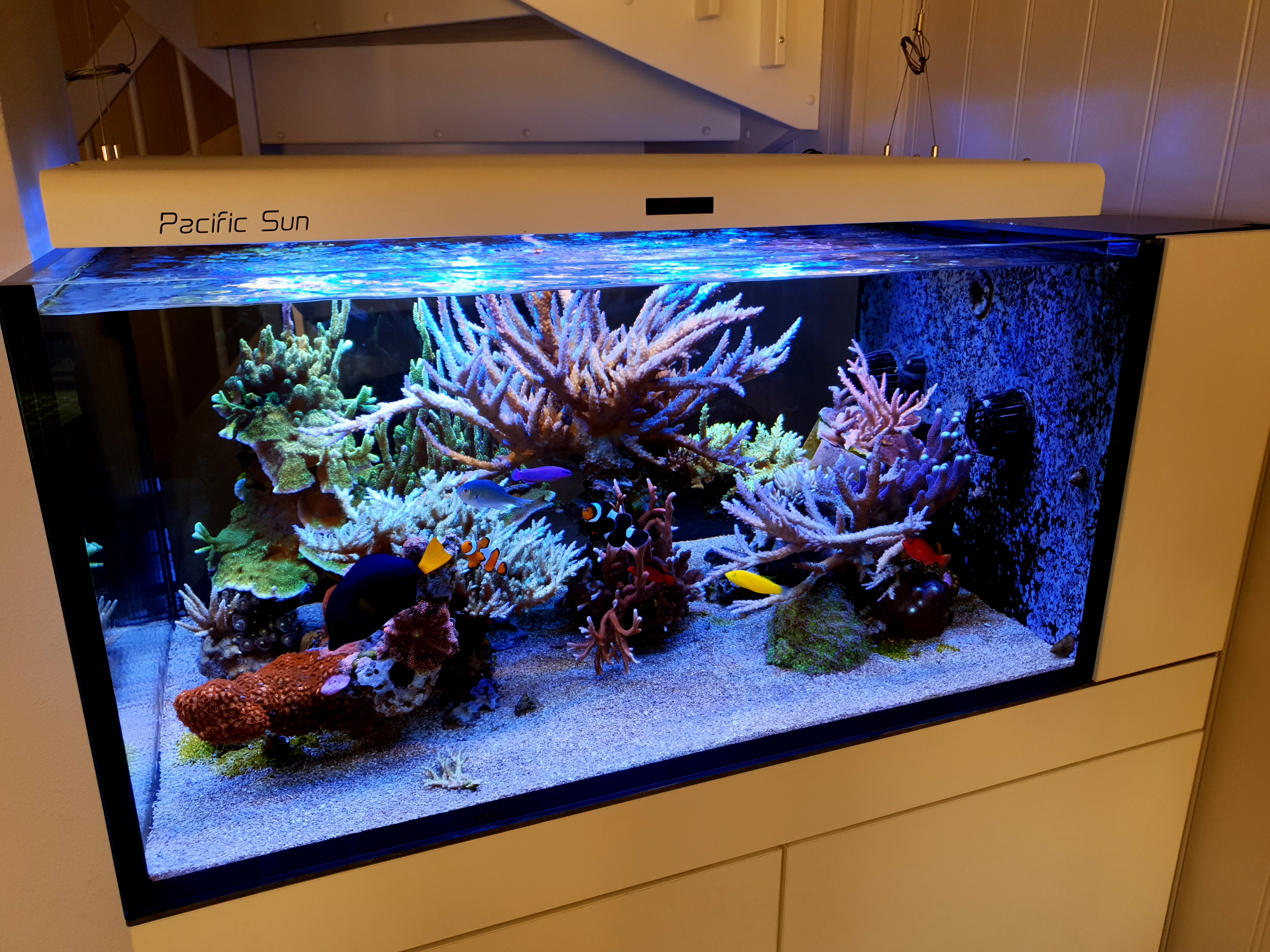 Help me stock my tank upgrade?