I just got a Guinea Fowl Puffer and I am confused. Are they the same as the Golden puffer? Mine is still black with white spots and about 6". If they are the same how long unitl it changes over to the gold coloration. Also about what size can I expect it to get?
X

Yes the guineafowl is the same as the golden puffer, both Arothron meleagris. Chance are that if the fish hasnt started to change colors to gold eyt then it probably wont. It most likely will stay black with white spots. In a tank they can probably get close to 15"-18". I have an all gold guineafowl puffer thats almost 12".

at 6" it prob wont change to gold. It would have by now. I have a 4" golden puffer right now. Its the smallest one i have ever seen!
Golden puffers are usually found in remote areas as well. I know from christmas island the golden puffers are much nicer then any where else. the black and white ones are still beautiful and are more rare then the golden version i believe.
L

First: both are the same species, Arothron Meleagris. Officially just different color morphs of the same species. Pure "Guinea Fowl" specimens are black with white spots in regular pattern/intervals all over their bodies. There are also pure golden ones that are a golden color with little to no spots (or the ones they have are randomized). There are also specimens that seem to be in between and appear sort of "banana turd/spoiled banana" looking, ie black with significant sized random patches of gold and still having the white spot pattern over most of their body.

From extensive conversations with importers, wholesalers, a professor of marine biology, and various hobbyists the hypothosis (nobody has a hard answer yet) is that the golden phase is actually male while the guinea fowl stage is female. If anyone has anything concrete on this I'd love to read it!

However, it also seems that in 99.x% of the cases once the animal is in captivity it does not change color (or thus possibly gender?!) That isn't to say they are not beautiful and personable in their own right. Just don't buy a small guinea fowl (black w' white spots) and expect it to turn gold the way a red coris changes or anything.

I have owned both and love my golden. I'm attaching pics of both the current golden and the guinea fowl. (adopted her from an LFS where she was a rescue case, ie somebody dropped her off emaciated and beat to *&%#) Regrettably she would never eat but was so friendly she would swim onto your hand or brush it if you put it in the tank with her. Pics below: 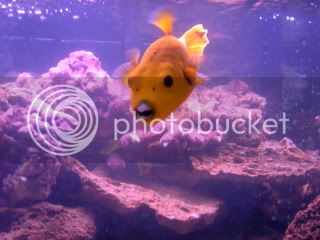 PS if anyone has any further info on this topic please let me know!
X

Are you suggesting that Arothron meleagris changes sex over time? Ive had a reg. guinea, a "banana turd" guinea as you called it, and now have a solid gold guinea. All were very outgoing and didnt get bossed around by any other fish. What exactly have you heard supporting this theory?
L

That is what several importers and wholesalers I've talked to in the atlanta area suggested. I've never been able to find any hard data on the subject one way or the other. They base the info on various stories of having fish in their holding tanks and anecdotal observations. To my knowledge nobody has ever tested or come up with anything firm. That is why I brought it up...the topic is of great interest to me and I was hoping to find out more.

So are you saying you had a fish that was conventional guinea fowl, turned into intermediate (bananna turd'ish), and then went full gold all while in your care? Or were these separate fish? The specimens I"ve seen behave similarly (outgoing but peaceful, nobody messed with them and they didn't pick on fish, etc)

Always curious....thanks for the info!
F

Ok Thanks for the great info LRS. Mine is the bannana turd colored one. He is one of the coolest fish that I have owned. I hope someone on here knows the answer to this question for sure.
Thanks
X

THey were all different fish.
L

Hmmm...good to know. As I find anything out I'll post it. Kelly (aka Puffer Queen) is a wealth of knowledge on captive puffer behavior. With her input, among others, hopefully we can get closer to answer on this topic.

Somtimes I wish research would go into areas there wasn't stupendous funding, but without it, the knowledge is up to us. That means that WE, the passionate pet owner, has ultimate responsibility. Treat the charge accordingly. Thus, the best knowledge of the species and the future lies in the hands of sub $11 an hour fish store employees. This is both a comfort and a travesty as only those with passion towards the industry remain...unfortunately we have lost too many to other higher paying pursuits. Its why LFS's can be both the greatest asset to the continuation of the species and its worst nightmare at the same time.

I've owned separate specimens (similar to xtrmchopz) and they all have similar personalities although it could be argued that anyone physically in the same space would believe the guinea fowl puffers to act more "feminine" and the golden more "masculine" based on subjective observations and our own cultural norms there is still no conclusive evidence to nail down the gender either way.

As I said, this subject is of great interest to me and I am very curious if anyone has any information to confirm things one way or the other.

Hope this helps...
You must log in or register to reply here.