My BTA's so emo it cuts itself (pic)

So I bought a very pretty green BTA over the weekend, but it's been walking around and looking decidedly unhappy. I keep noticing small nicks, cuts and abrasions on both the tentacles and column, usually with what look like a little bit of mesenterial filaments sticking out. I'm assuming these are from scraping against rocks, there isn't anything in the tank that could damage it (just two clowns, a cleaner shrimp and some hermits, none of which have seemed to notice it). The tank has pretty high flow. It inflates at times but mostly just lays partially limp upside down under a rock (not where I originally placed it, of course). I haven't checked my water parameters recently but everything else in the tank, including many SPS, are doing fine. Any ideas as to what is damaging it and what I can do? 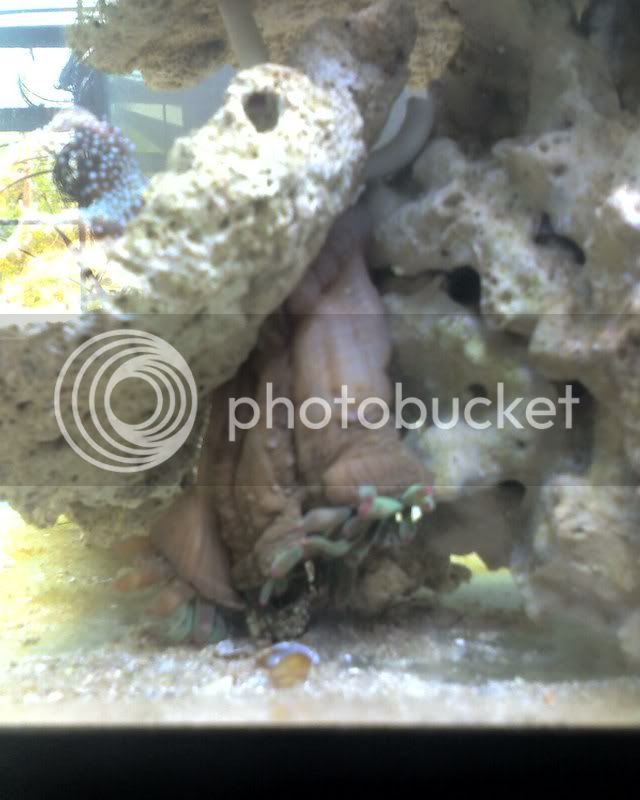 I would have to agree, 2-k 4's may be alot for the bta. what are your parameters?

It's looking better at the moment, mostly inflated, but still with the small cuts. I'm out of calcium/alk test kits at the moment. pH is 8.2, temp 79-81, nitrates aren't detectable on my (admittedly not very good) kit. No phosphate tests either, but do I run a PO4 reactor so I doubt that's the issue. I think it might be a current issue, the area it's in now is probably the lowest flow area in the tank (hence the small pile of debris in front of it in the picture). It's alternately inflating and deflating. Its current location isn't that great since it doesn't get a lot of light. Do BTAs just not handle high flow terribly well? I tried to get it to settle down in a rock with a pit in it, but it walked/blew away.

Edit: I haven't changed anything in a few weeks before adding the BTA and my parameters have always checked out pretty well.
C

be sure to keep an eye on him. I'd cover your koralia sides with filter foam to make sure he doesnt get sucked in when your not around. If hes unhapy and looking for a place to go, he may end up swimming too close, like one of mine did, and get sucked into the powerhead. You could try aiming your powerheads a little differently to lower the high flow at the bottom of the tank. Maybe point them more upwards toward the water surface, or heck, even unplug one of them for a while so that he can find a spot and dig in.
I have 2 Koralia 3's but thats in a 75g. I would think the high flow may be a bit much for him...?
I

I got an rbta a month or so ago and it had me freaked out with constantly deflating sometimes 2 or 3 times a day, even to the point that you could see the filaments clearly. Did this for about 2 weeks and now is fine. I read that they will do this as part of the acclimation process, expelling water to rid waste and exchange water. If your parameters check out and it doesn't look bleached then this may be the case along with the strong current. I have mine under 400w so light shouldn't the issue. Keep feeding it small krill or shrimp to help keep up and wait and see what happens. all you really can do.

as for the cuts, not sure.

Yeah, I modified my flow pattern when I added it and left the pumps off for a little while, it still went walkabout. The K4s are in the top corners of the tank, assuming it doesn't completely let go and start floating it would have to climb up a lot of glass to meet a powerhead. I guess I'll just let it walk around and find a place it likes.
I

bta are famous for walkabouts, mine started on the right side of my 150 long and is currently on the far left. the good thing is that if it likes where it is, it will usually stay. mine did. especially if you feed it, it will associate that spot as a good source of food

I must have gotten lucky with mine. he stayed right were I set him (within a few inches)
the cave area he's in has low flow. I really have no idea how much flow a nem needs, but I know they only move around constantly when they are not happy.

The first koralia I tried was a 4, I returned it cuz the flow was intense, even made a crater in my SB (down to the glass)

I hope he settles in and pulls thru

Sigh. Things aren't looking good. It's still in almost the same position (hanging upside down) and the cuts have gotten worse with the mouth somewhat open. I've figured out the cause of the damage, the bottom it was hanging over had some debris built up including a few very thin shells that were part of the live rock until they broke off. The movement of the anemone over the sharp shells started to give it dozens of tiny little cuts, through which mesenterial filaments are coming out. It's definitely not happy, deflated. I've tried to move the rock it's on to get it right side up, but the way the rocks are skewered together it's not possible. I did manage to move it away from the debris pile, though, and closer to another rock that hopefully he'll take a liking to. I've turned off one of the Koralias until this thing works itself out.

No improvement. I tried moving it to a rock with a deep hole in the center, with all of the pumps off except the (weak) return pump, it still wandered away. Now it's circling the bottom of the tank mostly upside down and shriveled and has been for the last few days. What conditions will make it stay somewhere, anywhere? Turning off the powerheads didn't work and doesn't seem to respond to light.

Only getting worse. Those cuts on the column have either gotten worse or were much deeper than I originally thought. It's been mostly shrivelled for a couple of days ago and walking slowly. As a last ditch attempt I moved it up into a rock nook with moderate light and low flow and gave it about half a cube of mysis with a turkey baster to try to get it back to life. If it doesn't improve in a couple of days it's probably a lost cause.

get it out of the tank i thought this would reveal itself to you but that anemone is not going to make it.

flush it
You must log in or register to reply here.