Show Us Your Fish Only Tanks

Since this forum says it all "reefcentral" i thought it would be cool to take a break from the reefs and see what stunning fish only s are out there! lets see them people

Nice fish. How long have you had this group together? How is the Cross Hatch and Faxface personalities with everyone else in the tank?
D

Holy crap, when did you get teh queen angel Dan?
A

myerst2: love the black tang and crosshatch nice rockwork
dan: that queen is stunning love that fish too

Thanks guys, got it 3 weeks ago today. The goal is no more fish. That way the new tank won't be overstocked. It is a very pretty fish and eats NLS pellets!

btw, didn't even see the black tang until you mentioned it AlexP....sharp eyes!

I still drool every time I see that big yellow tail coris. Still one of the most stunning fish on the reef and very under appreciated. They all get along great. The foxface was one of the first fish I got. The crosshatch was the last. You may not of noticed him but there is a rhinopias that I have had for about 8 months that I just sold. Also there is a borbonius and snowflake that are being removed as well to make room for a baby Japanese Dragon Moray i just got confirmation landed in the states last night. Regards, Tim
A

oh man i just noticed the rhinopias. ive always wanted to keep one of those. what are they like in terms of temperment, is it the type of fish that will get picked on by others? i heard they can be tricky to get eating any tips on getting a feeding response. i also noticed that yours is purple are they maybe prone to color loss if they dont get the right stuff to eat? i also wish you luck with the jap dragon moray. i remeber when i was 8 years old i saw one at a local shop and i was just so intimidated by this fish. just the way the look at you with those rows of teeth, man i was scared! but i still think its one of the most beautiful fish out there. keep us posted when you get him i would love to see this little guy.
M

How many variations of the the dragon eel are there? Anyone have any pictures to compare. Some call it a Japanese Dragon, others call it a Hawaiian Dragon etc.

<a href=showthread.php?s=&postid=12938836#post12938836 target=_blank>Originally posted</a> by MeskeetDog
How many variations of the the dragon eel are there? Anyone have any pictures to compare. Some call it a Japanese Dragon, others call it a Hawaiian Dragon etc.

There are two variations of Enchelycore pardalis (there's another eel species called the Brazilian dragon, but that isn't the one we're talking about). One from Hawaii, and one from Japan. The locations have two different color morphs of the same species. Other than color, they are the same.

This photo is not mine, but it's the best I've found that illustrates the difference between an average Japanese and the average Hawaiian. Sometimes Hawaiians have more brown/red like the Japanese, but it is not typical. 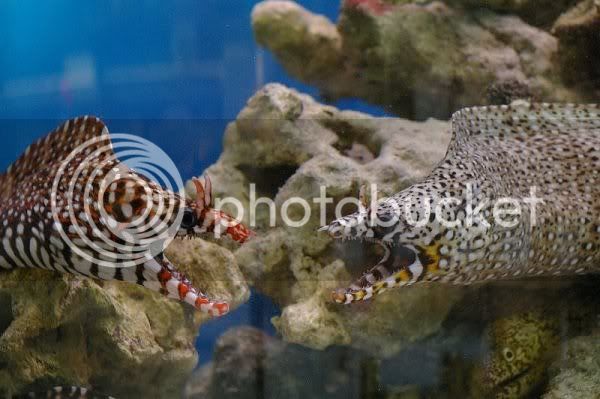 Japanese is on the left, and Hawaiian on the right.
A

hello all. The latest research I have heard about is that paradilis are the same exact eel. Though the Japanese specimens are usually more vibrant but that is not always the case. The eels are found also near the west side of Africa sporadically. They are also found throughout the south pacific but many of the locations they aren't collected or restricted. Also it appears the color variation changes dramatically even a few miles apart. On rare occasion I have seen the brightest most vibrant dragons come out of Hawaii that put the Japanese ones to shame. Also many say that males are the vibrant ones and they far less numerous than females, but this has yet to be proven. Anyway all I know is my little guy landed in the states on Friday night. I have yet to see my new guy. I have been waiting for him for well over a month. Last I spoke with my source I should receive him in about 10 days after they he is acclimated and eating. As one of the previous people posted, when I first laid my eyes on a dragon I was around 10 years old as well. I was in complete awe and a bit scared of the eel. I kept a 3 and half foot tessalata that are more aggressive than these guys but don't have that fierce look to them. To say I feel like that little amazed kid would be an understatement. Hopefully all works out. Keep your fingers crossed for me. Thanks, Tim

Here are some pics of my 210 gallon aggressive fowlr tank.

Nice set of triggers you've got!
A

I just noticed you guinea fowl has a chipped tooth hahahaha thats awesome doesnt seem to bother him though he looks nice and healthy!
D

How about that starfish in the rocks...

ihave always wanted to an all trigger tank. How is the aggression between them. Also in what order did you add them and who is the king. One last thing what do you do to cope with large amount waste produced by all of them. Thanks, Tim

The aggression in very minimal right now.mainly only when it comes to feeding time.They just push each other around a little with a little nip here or there to show who is the biggest.The queet trigger is the boss of the tank and i tried to add the most aggressive ones last but that was when i had all of them in my 55 gallon.Now when i add fish i trick them.I add 4 or 5 clames to one side of the tank and while they are all going nutz on them i add the new fish to the other side.it is almost like they don't notice there is a new fish.

<a href=showthread.php?s=&postid=12940909#post12940909 target=_blank>Originally posted</a> by myerst2
ihave always wanted to an all trigger tank. How is the aggression between them. Also in what order did you add them and who is the king. One last thing what do you do to cope with large amount waste produced by all of them. Thanks, Tim
Click to expand...

An essay on sustainable fishing