Compatibility of torch, hammer, and frogspawn? Can they touch?

I read in a CORAL magazine article from several years ago that (if I read right) Euphyllia sp. can all touch each other without stinging one another.

Is this the case? Can hammers touch torch or frogspawn, and vice versa?
K

I have two frogs and one hammer that all touch each other some when they are fully extended. I've seen no damage on any of the three. I don't have experience with a torch touching a frog or hammer though.

I have a feeling I'll have a torch hitting a frogspawn and hammer before too long. It's growing quicker, so it's only a matter of time. We'll see!

Premium Member
Just keep an eye on them. They are generally safe to keep next to each other. I recently had 2 torch colonies, 4 frogspawn colonies, and three 4 hammer colonies all touching each other without any problems. However I had to relocate a small torch colony because of his sweeper tentacles, he was trying to attack the other euphyllia's. I didn't see any damage to the other colonies, nor did I see any of his sweeper tentacles stick to the others. I relocated him to be safe.
Last edited: Aug 1, 2009

Premium Member
I recently got rid of most of the colonies because I'm getting into SPS corals more and wanted the real estate. This is an older picture but it looked pretty much the same up to a few weeks ago. With the exception that the colonies where quite a bit larger. 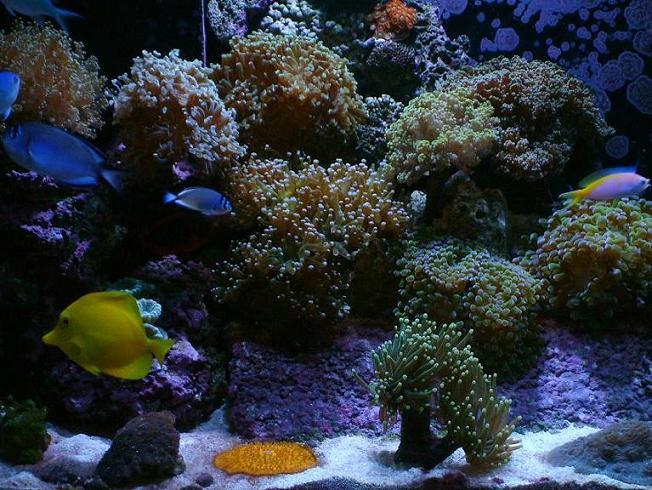 I keep my hammer and frogspawn close and they touch with no problems. I keep the torch a little bit further apart, but I haven't had any problems. Just give them plenty of room to grow, and they'll be alright.

That's the glory of euphillia's, they can all touch within each other, hammers, torches and frogspawns are completely compatible with one another. just keep them away from other types if you can.

This all sounds great!

I do have a few corals that will need to be kept further from them (notice the size of the tank, 25g, these euphyllias will overtake the tank in a matter of several months or so I'm sure). Mostly it's stuff like green stars and anthelia, and a few mushrooms that can move themselves if needed.

Thanks for all the help!

mine seem to get along quite well,

I know this is an old thread but tacking on additional comments always helps the next guy using google.

For years I had no issue with euphyllia touching each other but recently I purchased a green torch and placed it next to my orange frogspawn and it was definitely irritating it to the point the orange frogspawn would not open up on the side that was brushing against the torch's sweepers. I waited a few days and it only got worse so I moved the frogspawn. Now all is good.

Sent from my SM-N950U using Tapatalk

Premium Member
I have always heard a torch should be separated from the rest.
M

I have an euphyllias garden in my tank, for years all my hammers, frogs, torch, were touching each other and nothing happened. One day suddenly one hammer killed all the others.
R

Has anyone tried mixing these with Elegance corals?
H

Be careful with torches, I've had them attack hammer and frogspawn.

Sent from my SAMSUNG-SM-G930A using Tapatalk
You must log in or register to reply here.