Team RC
To borrow a greeting from dank11:
Hey!
If you have not yet tried Wegmans brand frozen Cinnamon Belgian Waffles yet, you should! They are as good as homemade!
To tie in a reef related tidbit: I have gone back to running an Iwasaki 6500k after two+ years of running an AB10kk in one lamp position. {I originally ran Iwasaki's for the first four years after setting up this reef aquarium.} I am now burning one 400w 20kk Radium, one 250w 10kk AB and one 250w 6500k Iwasaki- the colors remind me of a 'Pink Floyd' concert I attended years ago!
{Actually, it's not as good as that shows' lighting, and there is no giant inflatable pig!}
I installed the new 'Eye' last Friday. I know these bulbs put out PAR and can grow SPS corals like there's no tomorrow. But {ughhh!} I'd forgotten how UGLY their yellowish light appears!
I can live with a lot of discomfort, but I don't know if I can put up with this!
I guess I'll just eat my waffles facing away from the aquarium.

Premium Member
Guess you got spoiled with those high K lamps, eh?
You know, Brian from Atlantis did the most comprehensive test on 10kK vs. 6.5kK lamps on some of his frags, and I think the conclusion was not a significant difference?

Thanks for the waffle tip, we'll pick some up next week!

Team RC
I'm wondering if it is possible that 6500k's grow other things 'better' {like algae etc.} and thus indirectly affect a corals growth. Do you have a link to Brian's findings, Dave?
R

Premium Member
You're right Dave, Brian Conger did try lighting a few of his grow-out tanks w/ Iwasaki's for a spell, and recorded some differences. They were slight, but it was also a very short study (only a few months, I think?) There was some dramatic changes in color, but growth rate was pretty neck - n - neck (though the 'saki's did edge the 10K's out in a few cases, it wasn't by much). However I think it worth noting, these comparison's were on growing out frags, that are acclimated to 10K life. .. there's quite a bit of change going from colony to frag, on top of changing zooanthelia to match the spectrum of light supplied. In other words, I don't know as it was a completely un-biased test. Had the frags been taken from colony's grown under Iwasaki's, I think the differences would have been more drastic. I've noticed in my own experience, when I get corals from 10K tanks, it takes several months for the coral/frag to acclimate, and even then, color shifting is noticed up to a year or more after introducing the colony/frag to my tank.
The link should be somewhere on his page, Gary, www.atlantisaquatics.com, if it's still up and running. He shut down as of the first of the year, and I don't know if that means he killed the web page too, or not.

Team RC
Nutz! Either Brian shut down the page, or the link was bad. I'd like to believe there is nothing 'better' about 6500k's strictly from an aesthetics standpoint- 10kk AB's and Radium 20kk's look much more pleasing to the eye. Even my wife does not care for my new lightbulb! :sad2:
R

I think the page is gone... I'm getting a hit, and loading an index page, but nothing on it.
You could try talking to Brian, I he goes by the handle "Atlantis" on this board.

Premium Member
Sounds like we all should meet at Gary's place one morning for waffles and rate his lighting.

Team RC
C'mon down- the coffee is on! If anyone has 100% natural maple syrup, please bring it !

I'm afraid Brian has gone out of business. I heard he had a plague of something in his tanks...flatworms maybe? Whatever it was it killed his business...

Now for the amazing thing (you sensitive types better have a seat!)
I'm having my Wegmans waffles this morning and I'm still running these Iwasaki lamps. The same exact lamps that I installed in 2003 at the top of this thread. I've been running them (continuously) for 14 hours each day for over FOUR YEARS!
I have an Acropora gemmifera or humilis (I don't know which!) doing just fine under the one and a gigantea carpet anemone doing fine under the other.

Unfortunately, one of the Iwasakis is fluttering every now and then- thus my recent research of SE 250w halide lamps. I'm going to have to replace a lamp soon.

Maybe I should just stick with the "EYES", they're very reliable and almost indestructible. 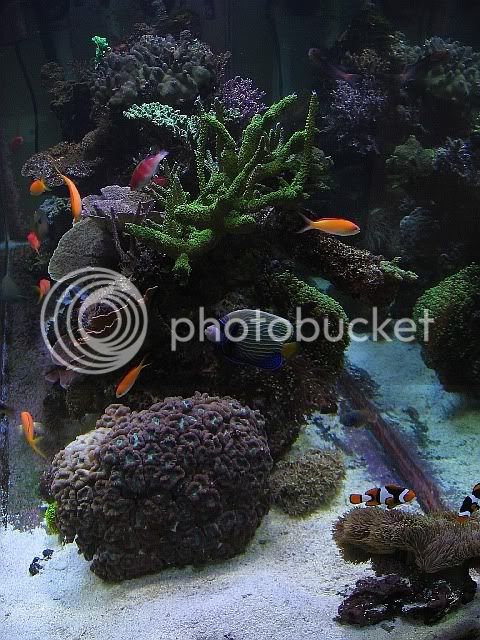 I've gotten used to looking at the Iwasakis while eating my waffles. Sorry. I couldn't help myself :lol: 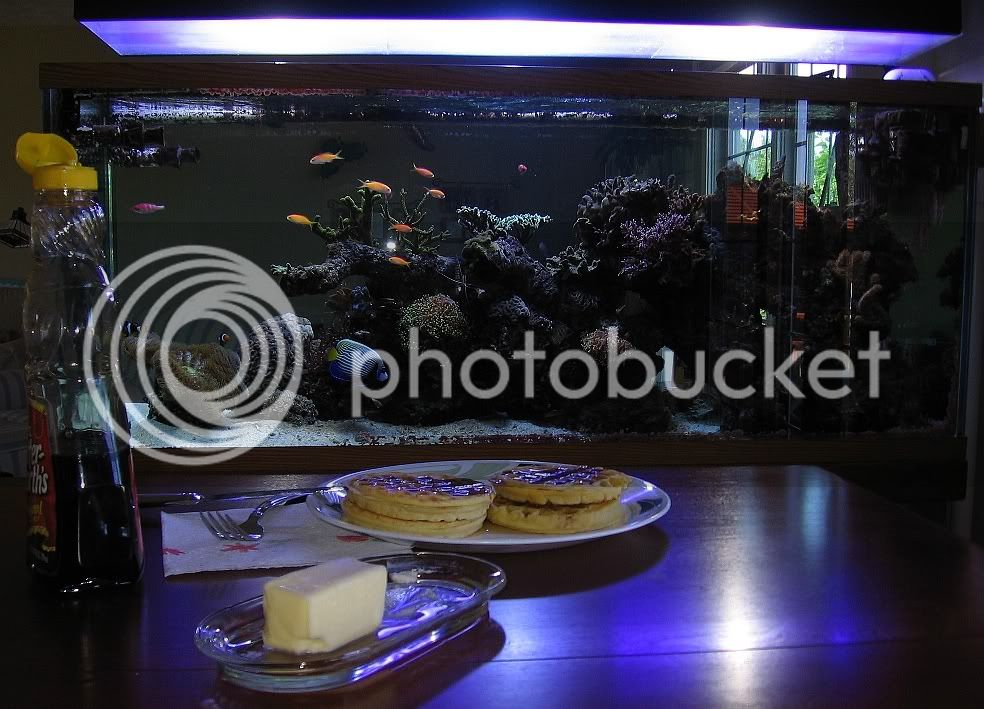 sorry, dude- I ate the whole box this morning. MMMMM!
Maybe we can still work things out- I need to go back to Wegmans and get some more :lol:
M

What happened to the 100% maple syrup? Wegmans carries it and it really is not that expensive for a weekend treat

As for bulbs, I recently put 2x250's over my 55 gallon and I have been researching bulbs and now trying them out. I have been using two 14K Hamilton's SVXH6 let me borrow an XM 10kk which I tried for a couple days in one spot for a side by side.

The XM was slightly brighter visually but you wouldn't guess the PPFD values were 115 vs 69 for the Hamilton. The color was fairly white with less blue and more yellow than the 14k bulb and I definitely would not be happy using them without suplimentation of some kind. With your 20KK in the middle they will probably look good, most likely "better" than the Iwasaki's at least to my taste.

The next bulb I would like to try is a 14KK Aquaconnect which according to Sanjay will give me 20% more PAR but hopefully the same or similar coloration as the Hamilton. I am not sure how mu9ch you want to change, but perhaps you could swap out the 20kk 400 and go with all 14kk and not give up much in the way of PAR.

If you want to try the XM bulb, PM SVXH6 and if he is OK with it, I can stop by your place before I return it to him.

Team RC
thanx for the offer, m-fine.
I replaced the 400w Radium with a 400w Hamilton 14k since the start of this thread.
This brings up an interesting point about judging lighting based solely on photographs:
if you look at the hood up there behind my waffles you can't really tell there's a color difference between my old 250w Iwasaki 6500 k's and the new 400w Hamilton 14k in the center.
If you see the lights in person you can tell there's a difference.
I'm leaning towards XM's or Iwasakis when it comes time to replace these Iwasakis.
Too bad the SE 250w 14k Iwasakis are not being offered for sale yet.
Last edited: Jun 9, 2007

Team RC
I forgot to mention:
these are the same Iwasaki's that were illuminating my aquarium over a year ago when it was the TOTM in 'Reefkeeping Online Magazine'.

WHAT, you changed 400 watt bulbs un the last 4 years? Next your going to tell me the coffee is no longer hot!

I would be curious to get a par reading on your 4 year old Iwasaki's compared to new ones if you stick with them. If they really do last 4+ years without much loss of output that would make them very cost effective.

Gary, if you're interested, when you do replace your bulbs let Mark K. or I know and we'll swing by and take a few readings with the meter. Then we can track the changes over time. It might also be interesting to take a few readings beforehand so you know how much of a difference you're subjecting your corals/anemone to with the change.

Team RC
Sounds good, Mark.
Probably all the more reason to replace with Iwasakis. We could compare outputs.
M

That would be some really cool info to know.
You must log in or register to reply here.