I've failed to create build threads here for some reason so I'll be documenting my new build as I go.

So it sounds like my tank will be shipping this week or next from CDA. I'm still waiting for some build pictures and will post those once I receive them.

I'm keeping this one low, it will be in my living room next to the couch and I want to be able to view it sitting down. It will be in a corner, with 2 viewable sides which is part of the reason for the 38" front to back.

Metal Halide, Lumenbright large refectors x2. I'm still deciding whether I'll need 250w or 400w lamps. Kelvin will be 14k hamilton. I'm using these reflectors so I can mount them 18" above the rim of the aquarium to bottom of pendant.

4 Kessil A360. These will be for adding more viewing time and also going blue when I want. I'll be controlling them with apex 0-10v ports.

I may add some orphek all blue strips if the kessils aren't bright enough.

I'm looking at building a "floating" canopy for this build. It will be mounted to the wall. I do want to figure out a way to incorporate inserts that will fill the gap between tank and canopy to block overspill for viewing movies, when companies over ect.

Return will be a m2 vectra for now. I may upgrade to a RO pump eventually.

In tank flow - all Tunze:

Considering a cryptic zone plumbed in with a 40g breeder

I've struggled to grow macros for the last year, so I may just skip any kind of plant based refugium altogether.

I'll still be using my apex classic for this build

Dosing will be my Geo's Reef 618 calcium reactor. I'll be sticking with no water changes and using the Reef Moonshiner's program.

I prebuilt my rockscape soon after placing my order for the tank in May. It has been cycling since then with circulation and heat. I've been adding ammonia every few days. I recently added the biobrick form my sump to the tub. I'll be starting to dose phytoplankton to the tub going forward to try and get a good pod population going. I've kept the rockwork in the bottom 1/3 of the the tank on this one. The goal is to allow for some good sized colonies to grow in and have plenty of free water for fish to swim.

This tank is going to have sand and I'm doing a blend of special grade with a few other types of live sand. The live sand has been in the hot garage all summer, so I think I'm just going to rinse it in tap, flush it a few times with RO/DI and then let it dry in the sun.

Not much without pictures, I know. Hopefully those will come through soon.

Box is 48x36. Drawn in sharpie is my current main structure of my 75g. Back and right pane are against walls. The back right corner is where the overflow will be. So viewing panes are left and front.

What do you guys think bridge for more coral placement or no bridge and let it all fill in with a few less pieces. 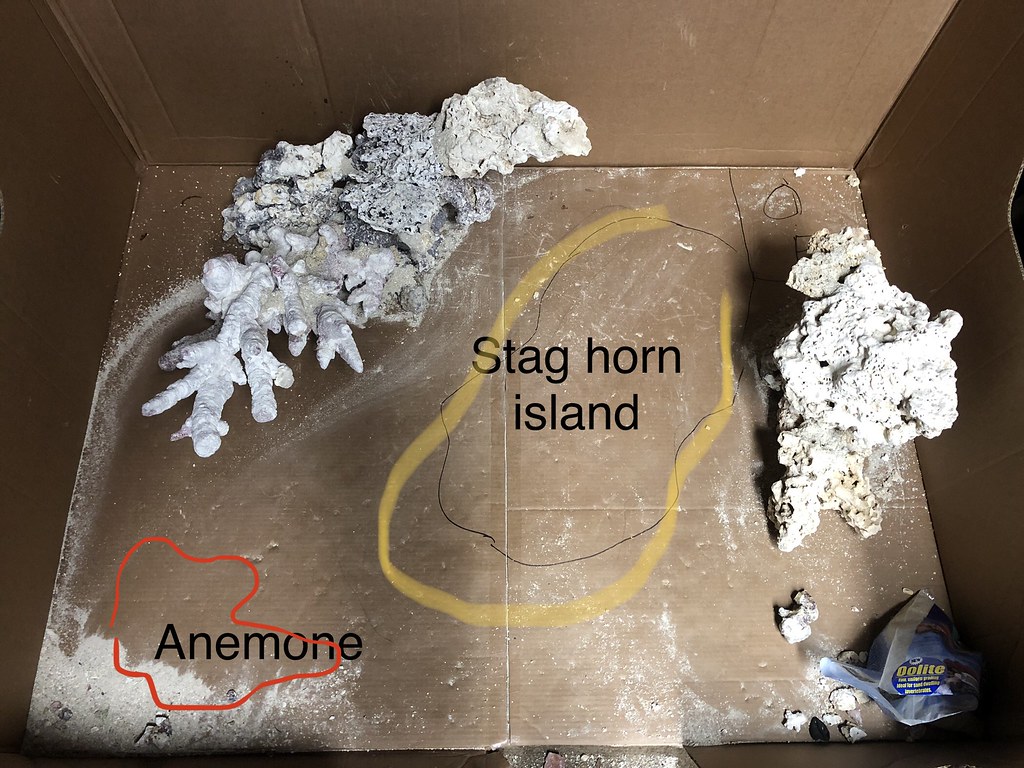 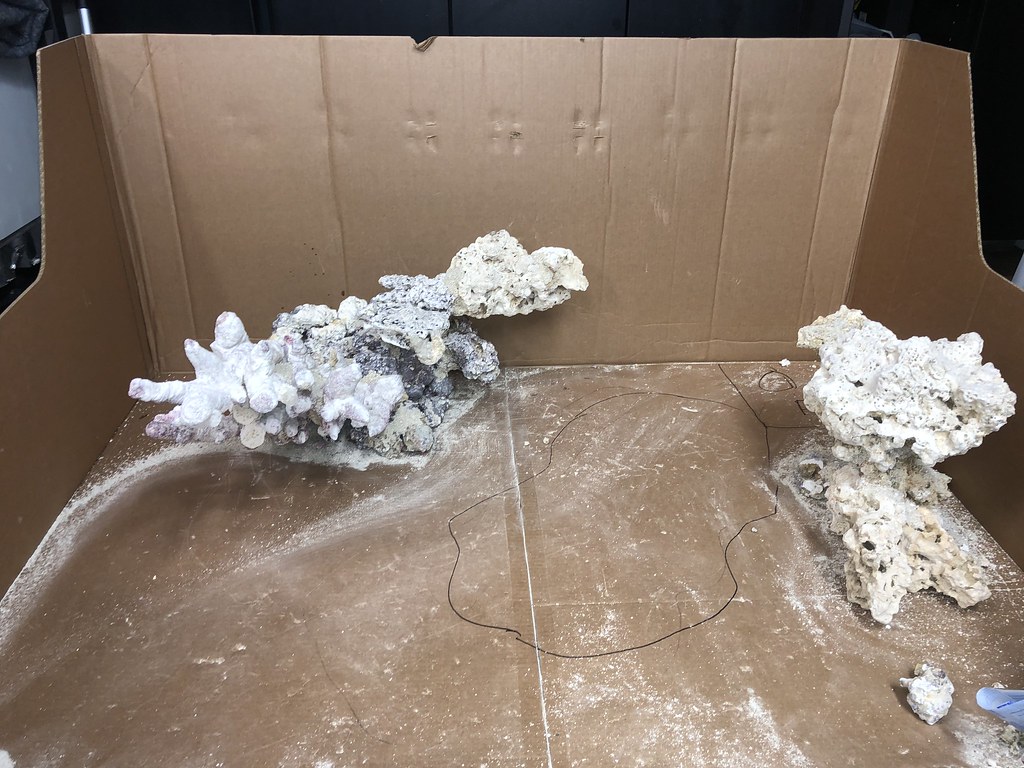 the bridged section I'm not sure on 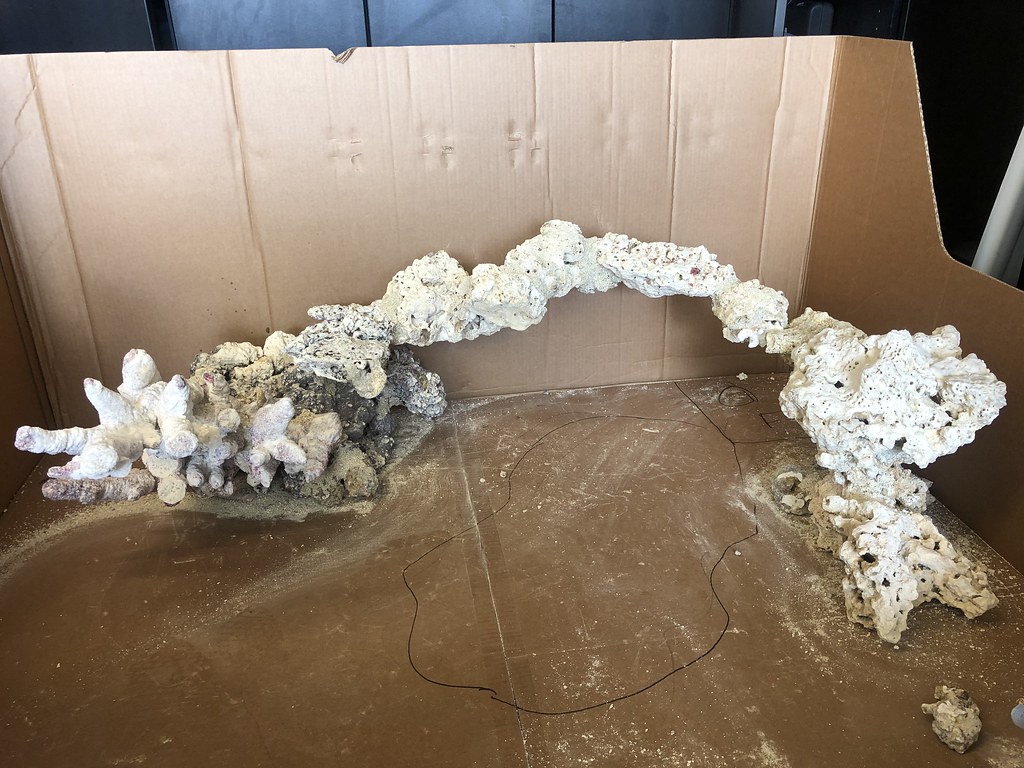 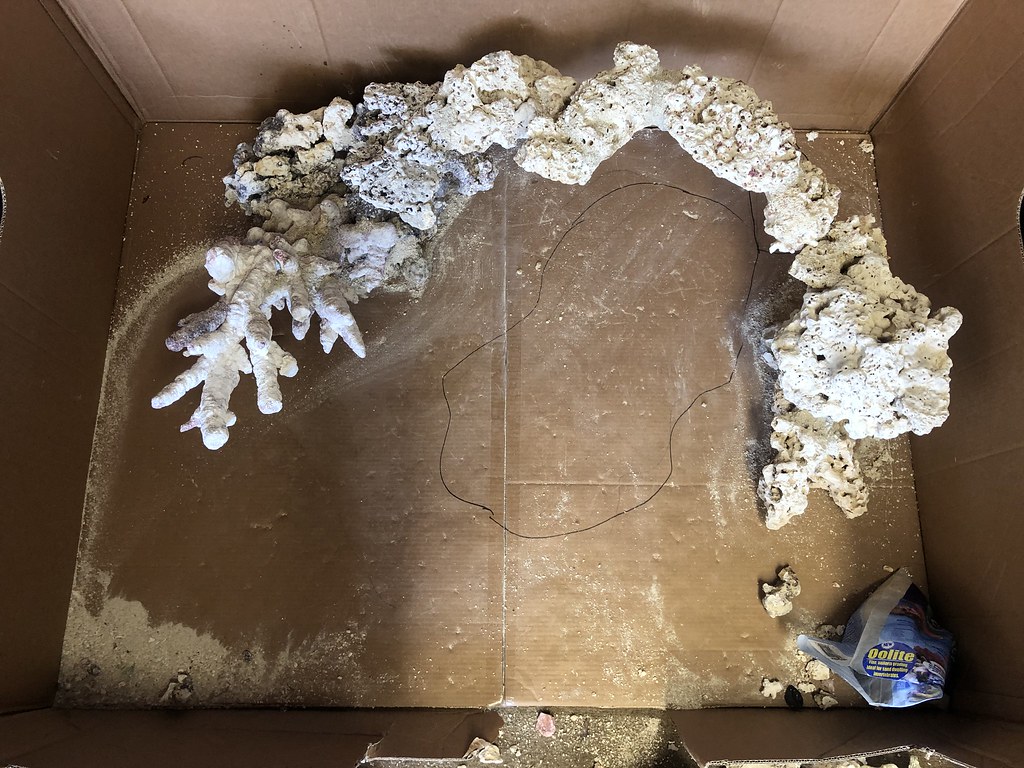 this is great! Really looking forward seeing the tank up and running. I've seen all of your acros for sale in another thread. They are beautiful! Are you worried about the tank move?

I like the idea of having 2 separate islands as opposed to 1 bridge. The gig will look great on its own, kind of like a showpiece island right there

Jamie1210 said:
this is great! Really looking forward seeing the tank up and running. I've seen all of your acros for sale in another thread. They are beautiful! Are you worried about the tank move?

I like the idea of having 2 separate islands as opposed to 1 bridge. The gig will look great on its own, kind of like a showpiece island right there
Click to expand...

That's exactly what I'm hoping for. When people come over who are not necessarily into reef tanks they always spot the clowns and enjoy it. It would be awesome to have all that action and flowy movement right up front.

That's the general feed back I've gotten so far too, leave the bridge out and let it fill in. It will look more natural in the end.

Most my tank upgrades have been a nightmare, where the new tank is going where the old one was. Usually turns into a 12-14 long day but successful for the most part. That's not the case here with the new tank being across the room, so that's a major plus! I've also been cycling that rock work since May in a bin in the garage so that part should be good too. My colonies are larger than in the past moves so that does have me nervous, I know the bigger usually the more finicky to change. I'll set up my 50g cycle bin as a temp holding tank with a controller I used for my past QT system. That's been my key to success in past tank swaps even when they went way long. I'll have heat and solid flow in there.

Going to be a great build. My tank now is 5 years old and so many things have been changed with equipment and such but o must say the 8020 canopy bolted to the wall has modified now 3 times for lighting. Letting things fill in is key. Having a calcium reactor makes things easier in the long run as well. I look forward to seeing the progress.

wishntoboutside said:
Going to be a great build. My tank now is 5 years old and so many things have been changed with equipment and such but o must say the 8020 canopy bolted to the wall has modified now 3 times for lighting. Letting things fill in is key. Having a calcium reactor makes things easier in the long run as well. I look forward to seeing the progress.
Click to expand...

I really like the 8020 for the same reason. I'm starting off with the MH pair and kessils for supplement but I'm not 100% sure how the kessils will work at that height. It'll be nice to have the adjustability/add on factor of it all.

I've been running this GEO for a few years now and it's been treating me very well. Currently battling a weird behavior from it but I think I've got it narrowed down to a check valve issue.

Wow, that aqauscape is going to look amazing. Following!!

Thanks, just gotta hope I eyeballed that center rock right and I think it'll turn out good :beer:

Nice size tank - how long was the wait time for the tank?

I put my deposit down in May so about 5 months if delivered soon. Original estimate was 3 so not too bad.

Got some pictures! Pending some coating materials for the stand, I should get it Friday or Saturday:

Dude, I don't see how you were able to wait 5 months. I would have been calling everyday after the first week [emoji23]

FishyBeaner said:
Dude, I don't see how you were able to wait 5 months. I would have been calling everyday after the first week [emoji23]


Sent from my iPhone using Tapatalk Pro
Click to expand...

Oh tell me about it. This weeks gonna be like waiting all over again!

Wait... a Second. Did you build that stand yourself???

One of my favorite tanks was a SCA 66g. This is the same proportions as that just jumbo and taller. That wasn't planned but worked out that way. I basically got the okay to put a larger tank in the corner, so I used every inch I could

Smite said:
One of my favorite tanks was a SCA 66g. This is the same proportions as that just jumbo and taller. That wasn't planned but worked out that way. I basically got the okay to put a larger tank in the corner, so I used every inch I could
Click to expand...

I have the opposite problem. My wife (jamie1210) always tell me to go bigger on tanks

Nope, I wish I had some welding skills! They had a deal on steel stand when I purchased the tank and that also extends the tank warranty to 5 years so I took the bait.

I am going to be skinning the stand myself and building a "floating" canopy to match.

I've noticed my last two tanks had some splash and salt creep damage to the drywall. Does or has anyone ran some type of backsplash behind the tank? I'm not thinking tile or anything but maybe some type of treated tongue and groove board or wainscoting paneling cut to fit? Probably white so it helps direct light overspill back into the tank

Also, anyone have experience running an outdoor sump? I'd love to have this system as quiet as possible and keep all the loud, hot and stinky stuff out of the living room. The tank is on an exterior side wall. That side walkway gets very little sun. I'm just wondering if the effort would be worth it, or if it's just too hard to keep it insulated properly. I'd plan on building a small 5x24-30" x 7' tall insulated shed if I go that route. It would house the sump, and all sump equipment. More than likely all the ballasts as well.

Premium Member
Love the dimensions and your frags are doing great.

I think I mentioned when we met up that I moved my DT sump to the garage over the summer. While it took a great deal of time and planning it was worth every second. I was able to automate more of the manual work plus no mess/noise in the house (wife loves this). Here are some details which should be similar to an outside sump:

- My house is on raised foundation so I was able to drill through floor and go underground
- Sump placement in the garage about 20 ft from DT. Used a combo of SCH 40 and 80 parts from BRS
- Was a bit concerned about the distance so decided to buy a new return pump. Turns out I did not have to worry a Syncra 3.5 was more then enough (old pump)
- Had to tear out the stairs to the garage so that I can get the plumbing into the garage. Rebuilt the stairs so that there's a hollow underneath for the pipes/plugs/cables
- I have a tube that goes outside to the backyard drains for easier water change. Best thing ever. Just a turn of a switch and the water goes out.
- I placed an A/C unit near the sump, along with two other tanks for the summer. I have a fan on the sump as well. I have 3 Eheim heaters in the sump but planning to get one more since it's getting pretty cold in the garage (~50 degrees and will go down to 30's later)
- The sump is on an old workstation that came with the house. I had to extend the width of the table to hold the sump and another tank. The elevation facilitates a lot of manual work as well as better view of the sump vs. under a stand.

Best,
James
You must log in or register to reply here.

R
Anyone know/recommend a custom aquarium and/or stand builder?