Title says it all. He's about 3" and greenish in color with pink feathers on his tail. Was a hitch-hiker, so I have no idea what species it is. He's been living in my sump for about 2 years and is pretty docile for a mantis. Had a pair of tomato clowns with him and he never bothered them.

I'm in the middle of a tank swap and really don't have a home for him in the new sump setup like I thought I would. He is missing one of his hammers as he was a dumb-XXX and must have attacked the powerhead I had driving my carbon reactor and got it stuck. I had to cut him out of the powerhead! He is eating though and really not happy about living in a bowl!

I have a home for him- is 8 gallons enough?

yeah I would think that should be fine! He used to reside in a 5ga! He's not very big and I'm pretty sure he's not getting any bigger!

He's already back in the sump. He was in a metal bowl and the pictures just weren't coming out. He's an olive green. Not the prettiest mantis by far, but pretty interactive. Will eat silversides from a stick. And the price is right! It's still easy to catch him as there's nothing in the sump other than a few rocks, but I'll never get his picture to come out well.

I found an older picture of him I completely forgotten about!

Would really like to find this guy a better home. He's not flashy but has been a lot of fun the past few years! I found him purely by accident in the 75ga at work. He had been in there for months and I had no idea. Never bothered any of the livestock. 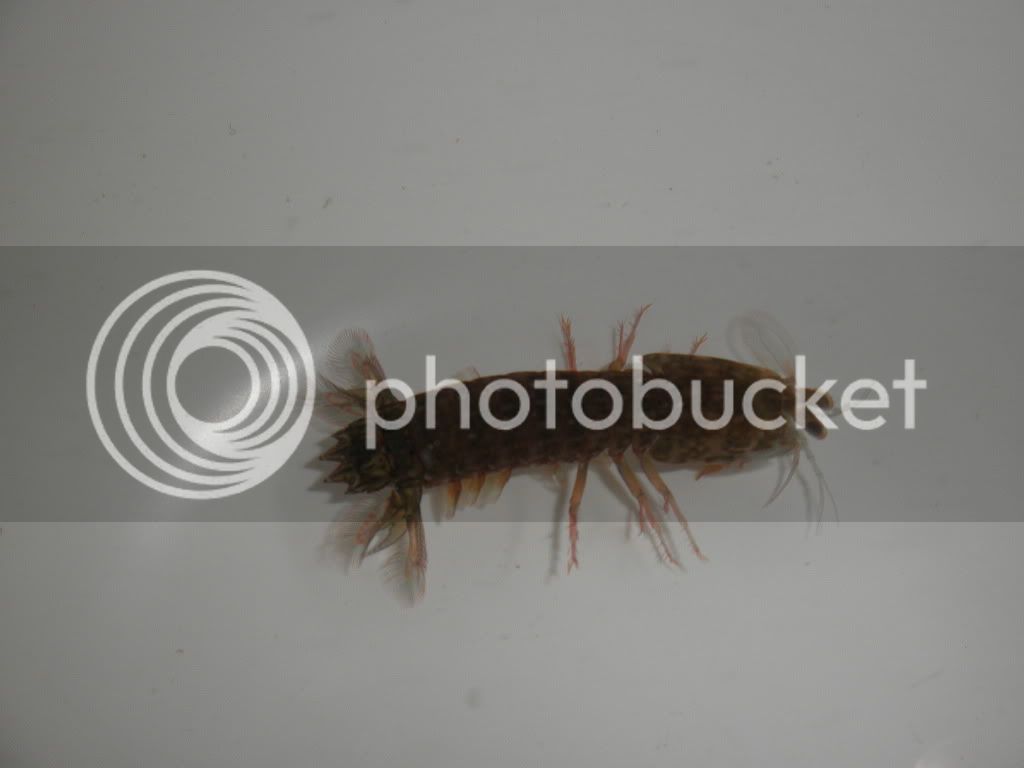 cant make him out that well but if you look for dr roys list of stomapods it will help you if the clowns made it out alive he is probally a smasher not a spearer. Do not think it s a werner

is a serious goby fanatic

These guys are really difficult to ID based on the pictures we can take of them. I used to frequent the mantis forum and everyone always wants an ID.

I have a hitchhiker mantis and I love her. She's the toughest little creature ever. I have no idea what kind of mantis she is and I don't care. She's super cool. Whoever gets this one is lucky.

I remember posting this in the mantis forum back when I found it. The ID was never conclusive, but I will second EvilMel is saying it's a tough little bugger! Survived the power outages during the hurricane/winter storms. Has had to be cut out of the maxijet (twice now) for attacking the grating and getting its hammers stuck!

I would really love to see he/she/it go to a nice little home as the rock pile in my sump is not ideal, especially since it's now turning into a frag tank and I will have my hands in there....

Yes they are tough considering most of em come in on live rock that is shipped wrapped in papertowels for moisture and such. The easiest way for an ID is to get a shot of the merel (sp) spot on the inside of their weaponry. I have had two and they where great fun my son got disinterested in his and I moved him on to Muppet. I had mine in a 14g bio cube and it was really plenty big. I kept softy s with him and he would rearrange them where he wanted them. I would buy a raw shrimp for him. Ghost shrimp also went over well. I think his favorite was the dwarf cerith snails though. The emerald crab in my thingy over there <------ is actually from that tank.

I wish I had thought to take a picture of the inside of his weaponry as I was cutting it out of the damned maxi-jet intake! All I know is that it was bright pink with a little black spot at the joint.

*note: I cut the maxi jet grating FYI, not him!

solid black spot or white circle around it? if you can recall

I'm 99% sure it was solid black. I remember it standing out pretty vividly against the pink. I thought it might have been an injury mark or something!
You must log in or register to reply here.