After six months of planning and purchasing, and four weeks of having my tank set up, I figured it was time to document with a build thread and get some feedback. I began purchasing various items off of Craig's List and had a 55 gallon Uniquarium all plumbed, filled with water to checked for leaks, etc. when my husband brought home a 120 gallon setup that was clearly much nicer than what I had just set up. 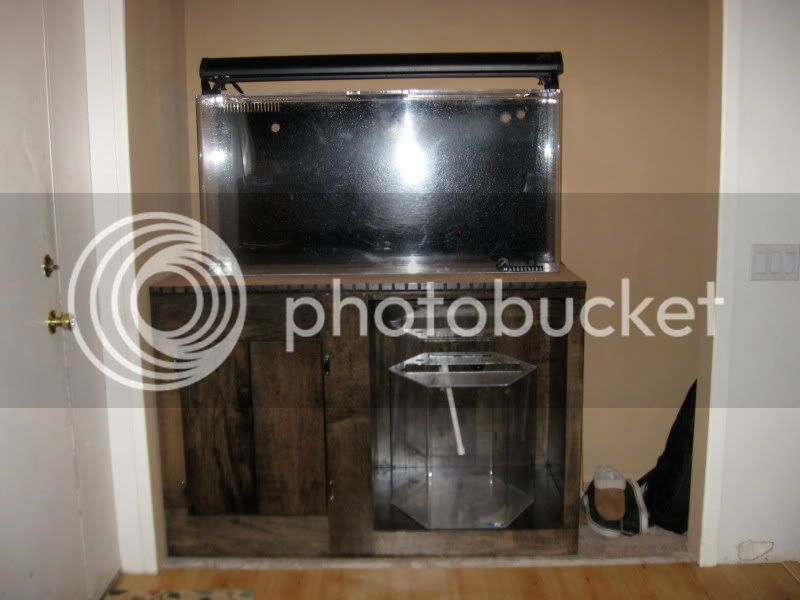 So the tear down began, before I even got started.

This is what he brought home. 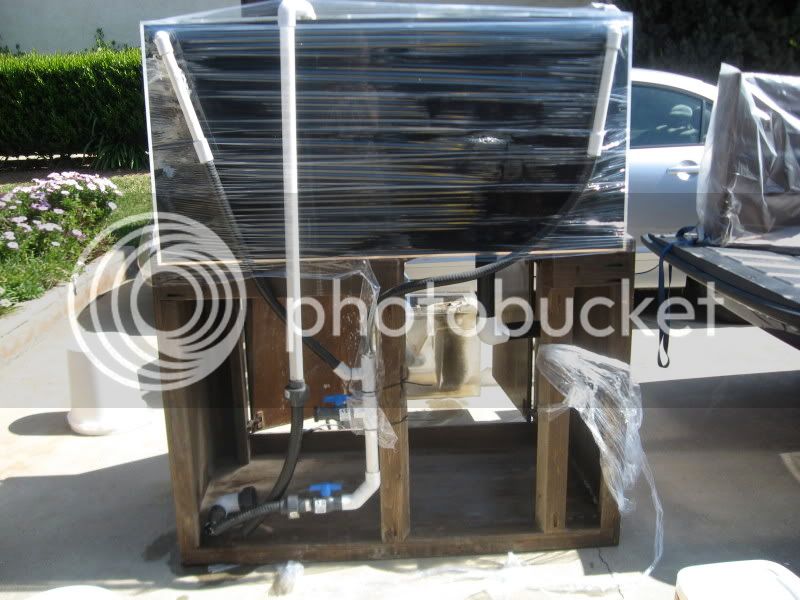 It came complete with a 30 gallon sump that needed some cleaning, a EuroReef Protein Skimmer (I'm not sure what model), and a Phosban Reactor. 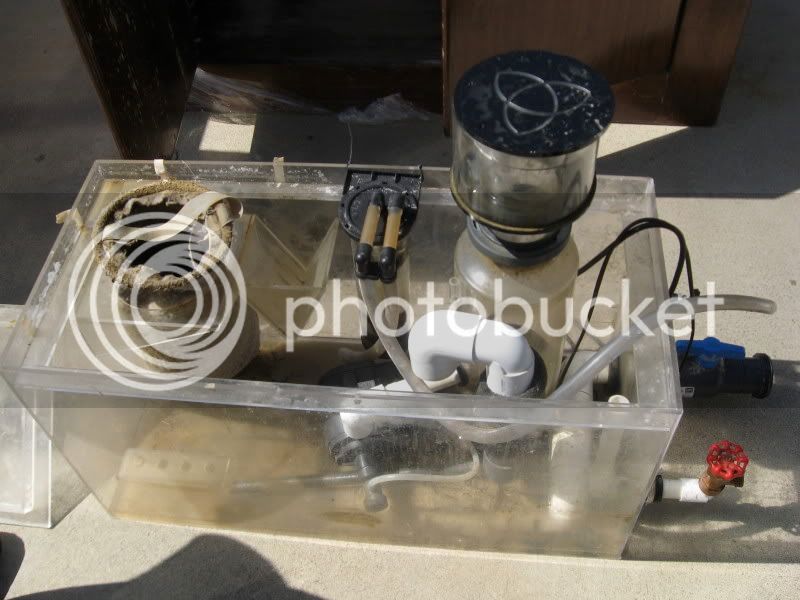 I already had lights, heaters, and this 35 gallon aquarium that I was planning on using for a refugium. It was currently holding my catfish! 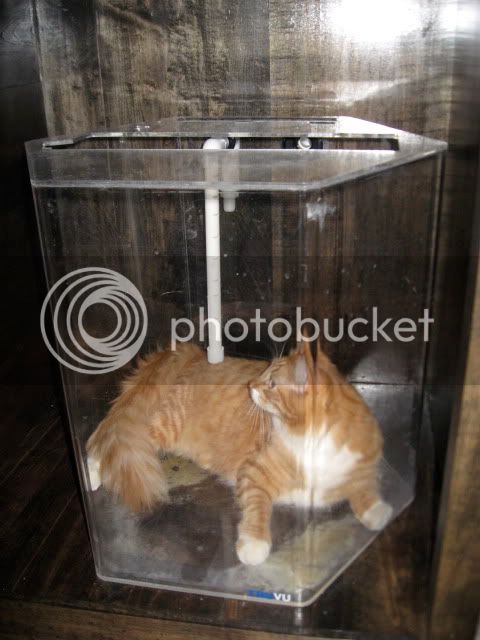 Needless to say, this stuff was better than what I was originally planning, but now we had to work twice as hard to put it all together.

Premium Member
looks like you got your work cut out. I hear it's hard to move those catfish... once they find a place they like they don't want to move

That has some serious potential!
C

The same Saturday that my husband brought home the tank, I was browsing through the local club's for sale board and came across someone who was selling 150 lbs. of live rock from his tank that he was tearing down. I called him up needing just 100 lbs. for the 55 gal., but ended up buying it all for the smoking price of $250. The rock looked great, a bunch of shelf pieces, branch, etc. but now I didn't have a tank to put it in! Fortunately, I had already picked up one batch of saltwater. We had bought a couple of 55 gal. drums the weekend before and have access to free saltwater (Scripps water, it's nice to live in San Diego!) So I heated some up and put the rock in a couple of large tubs to sit for a few days with a powerhead running while we got the new tank plumbed and ready.

The rock looked nice even in the tubs. Lots of coralline algae growth, a bunch of stomatella snails climbing all over the place, 3 little hermit crabs and a ton of pods swimming and crawling around. I thought I even saw what might be some colonies of something on a few of the rocks. I was getting very anxious to make sure nothing sat in those tubs for too long.

The sump from this new system was the new piece of the puzzle to figure out. The other uniquarium didn't have a separate sump as we were planning on using the back to hold a HOB skimmer, and the heaters and powerheads were thrown in there as well. We had purchased an external pump for the fuge to return to the display tank, but figured it wasn't enough power for the new sump. The difficultly was in finding a new pump locally that didn't cost an arm and a leg. Custom Aquatics is not too far away, but they aren't open for local pickups on the weekends. And I really wanted to get water in the tank. Fortunately, a LFS had an Iwaki that they were getting rid of for $100, so we snapped it up and got to plumbing, figuring I'd worry about the fuge another day.

Staff member
RC Mod
Wow, you got some really good deals! Good luck with the set up!

What's that valve with the red knob made of?

I can't wait to see you fill it up! Nice find by the way.
C

The valve is copper colored plastic. It's kind of a good way to have an emergency drain. Just hook up a garden hose to it and run it outside. It sure beats siphoning or bailing out with buckets.
C

After a couple of days of heating the saltwater and making sure the new tank was leak free, I was anxious to get all the rock in the water. My last salt tank in the mid-90's was completely decorated with dead corals, barnacles, etc. so this was my first attempt at aquascaping with live rock. The guy whose tank we pulled the rock out of just had the rock in a flat pile across the bottom of his tank, and I knew that wasn't what I wanted so I made an attempt with my husband guiding my hand. It sure is hard to see what your doing from the top of the tank looking down. And even harder to try and see through the front when trying to reach in through the bottom. I did manage to get the pieces with the least amount of coralline placed on the bottom and those with what looked like colonies to the top. Then when sifting through the buckets I came across several dozen stomatella snails, sweeet!

Here is the aquascaping, if you can see it through the bubbles. There are lots of nooks and crannies, but all in all, just a wall. 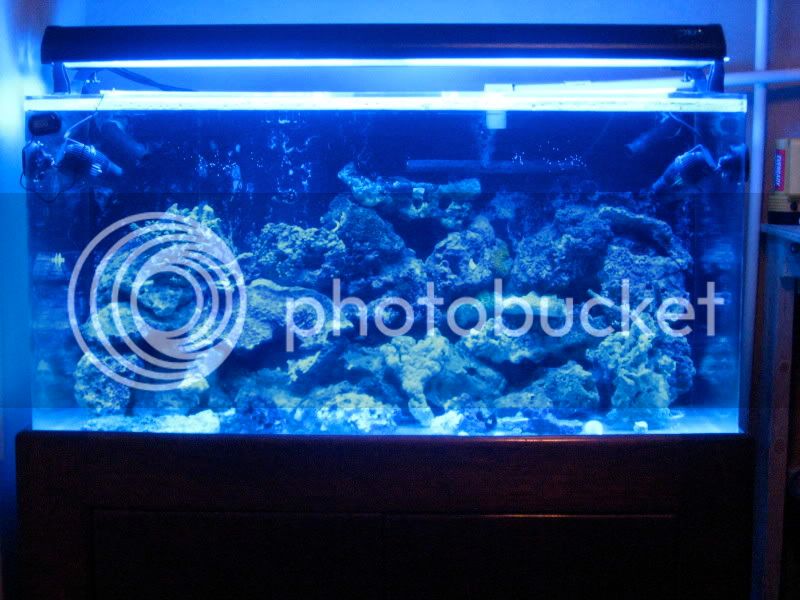 There is a lot of leftover small pieces just sitting on the bottom right now that I planned on moving into the fuge once it got properly connected.
J

Tang Police would pobably say that catfish needs at least a 300g to thrive.
C

Within a couple of days these colonies that I thought I saw started to come to life. At first there was only this one... 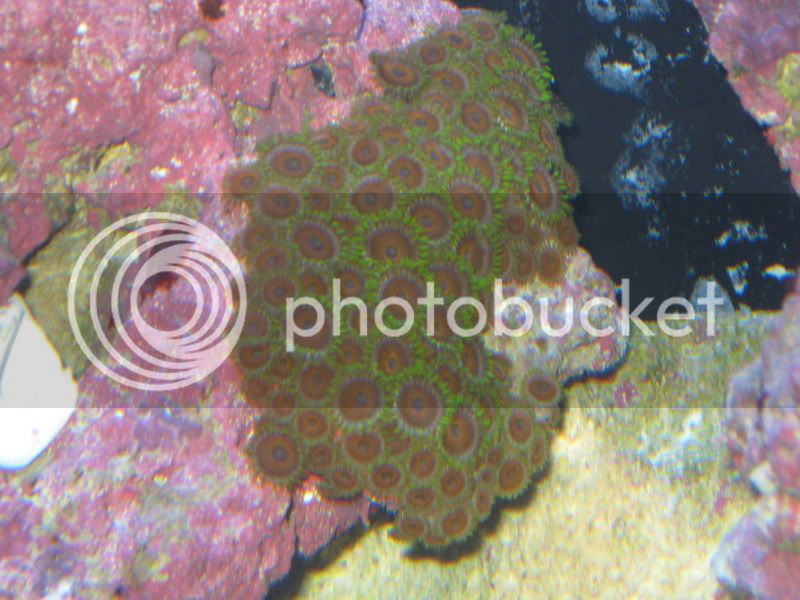 Then, I noticed another, but I wasn't sure what it was... 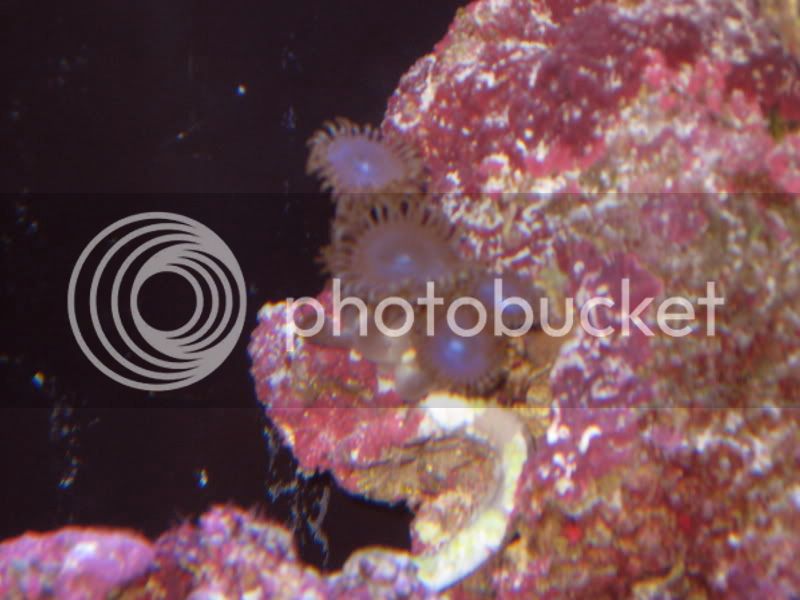 This one was upside down not reaching the light, so I turned it over and it started to open up. 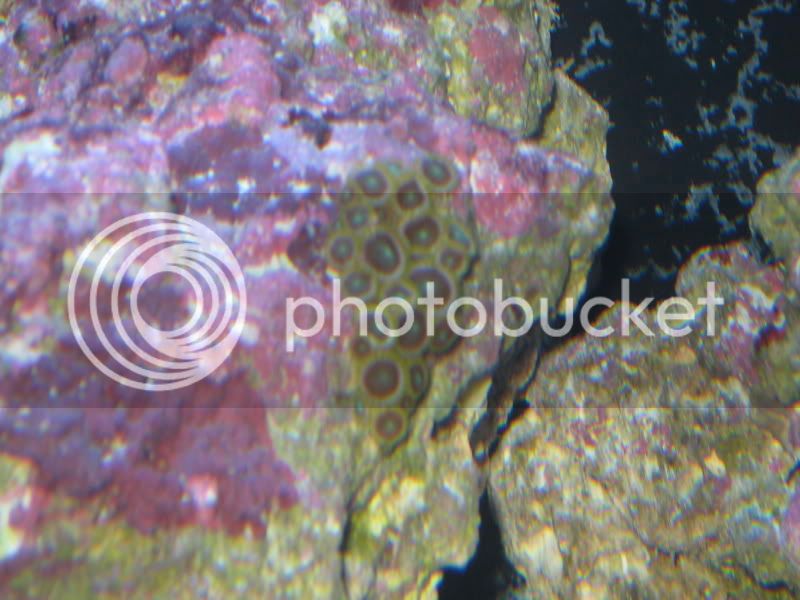 I was originally planning on having a FOWLR tank, but this kind of changed my mind. I just love surprises. I don't have any idea what to do with them though, so I guess it's back to more research.

I also placed an order for 120 lbs of sand, some live, some not.

Premium Member
I wish I can veiw the pictures from work. I love to see what people find on their LR. I guess I will have to wait til I get home.

Moved on to my couch

Nice catfish, but i read somewhere they dont like saltwater to much.:rollface:
C

A couple of days after getting the rock in the tank, my husband built a stand for the refugium. The plan was to have it as a display refugium, housing various macros and to grow pods in. I also wanted to put a few of those extra pieces of live rock in there and a deep sand bed. It was difficult removing my cat-fish. He really became attached to that tank, but we decided to have it gravity feed back to the display tank and it was a little difficult for him to climb in and out. So this is what we came up with... 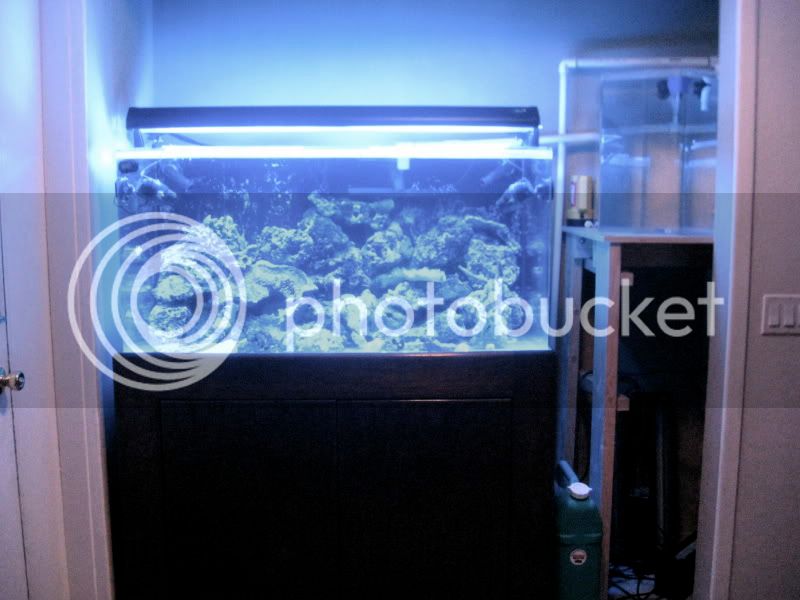 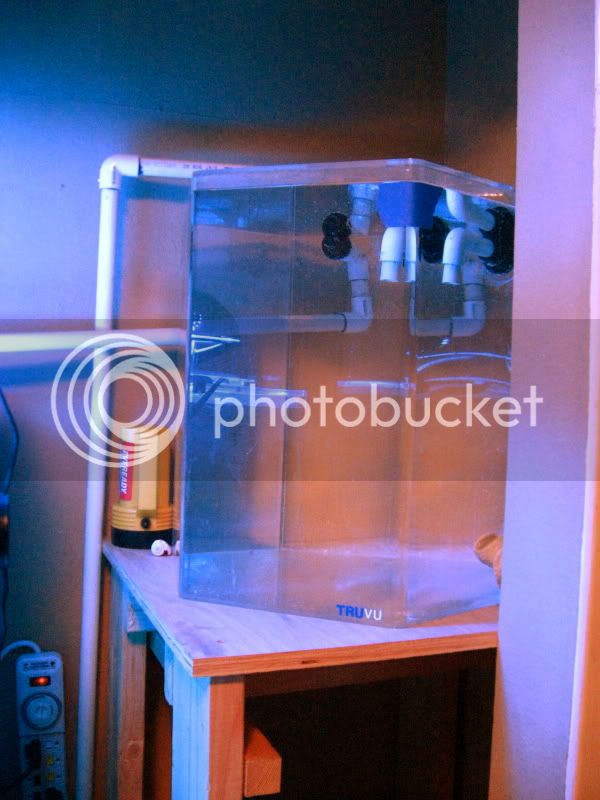 and a view of the sump and return pump that branches off 3 ways, 2 to the display and 1 to the fuge. 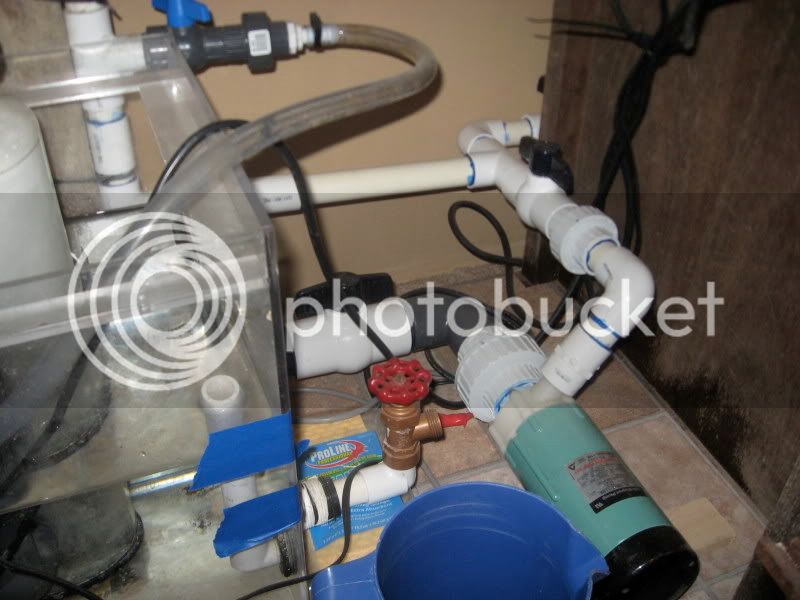 I need help id'ing something I found on one of my rocks in the middle of a zoa colony. It's really only visable when the polyps surrounding it are closed, but I think I got a good picture of it today. Does anyone have any idea what this is (the one that is ringed in yellow)? 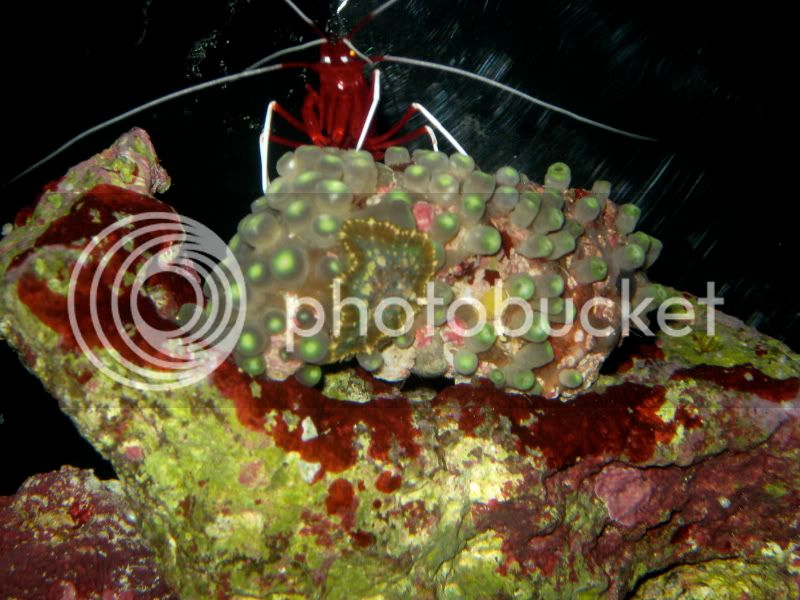 Team RC
You will be amazed at just how fast a catfish will move when you add water to its tank!

The thing on the left is a mushroom and the little yellow ball to the right is a sponge.
You must log in or register to reply here.