Well, after a year of research, breaking down my 30g FW tank and moving into a new house, I decided to start my first saltwater tank. Before I get into the nitty gritty, a little background.

I am a mechanical engineer that designs sounding rocket payloads for a living. I work here:
http://www.nsroc.com/front/html/mmframe.html

About 2 years ago now I started doing research on FW and set up a 30g FW community tank. Looking back, I now know I rushed the 30g and it never got established properly. I lost several different batches of fish and plants. I decided to try something a little different and compare the two so I researched and setup a 75g African Cichlid tank going. From there I was hooked. I started to improve things on these two tanks over the next year. Stronger lights, a better water filter, more powerful pump. The 75g eventually stabilized while the 30g languished and never really got going.

In the beginning of 2007, I got tired of renting and started house hunting. In August 2007 I found a house. I broke down the 30g, and gave away the few remaining fish. The 75g moved with me without problem.

So, a lot of research, a few questions, several books, more research, window shopping, and now a year later, I took the dive. 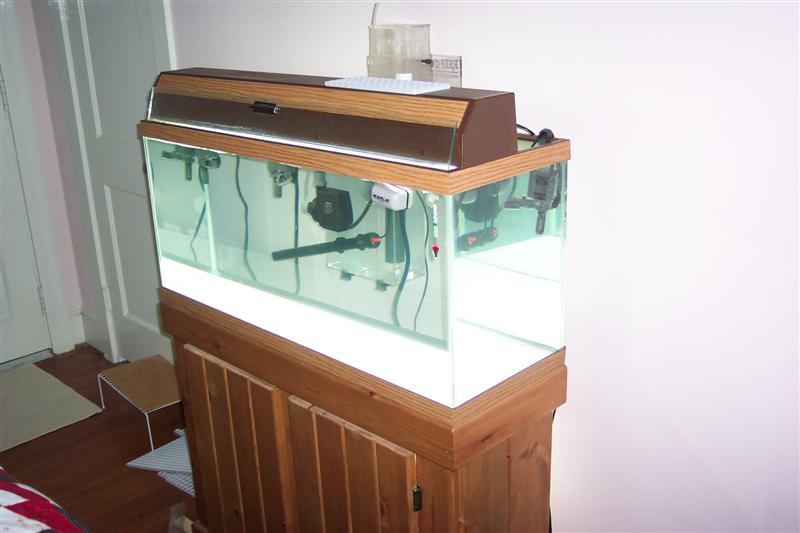 From there, I used a gift card from Christmas to build a DIY PVC overflow. I scavenged the MD5 from the Cichlid tank and incorporated a 10g sump. 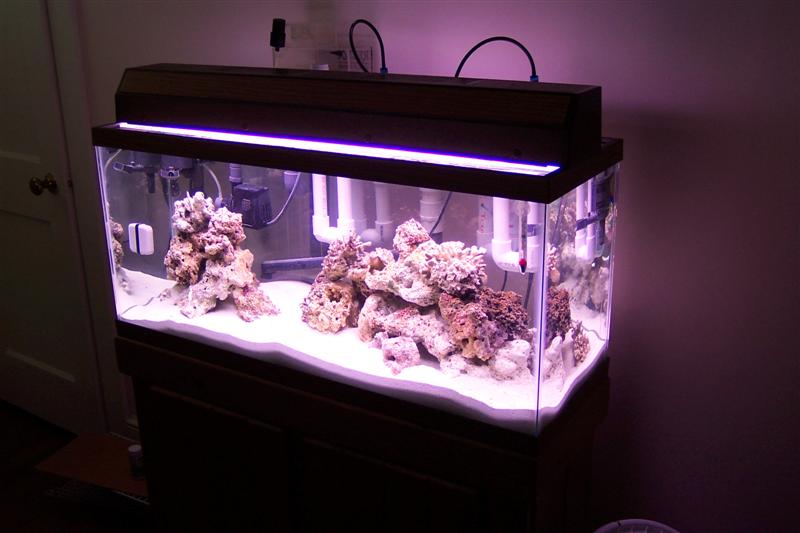 Next was two trips to Dr. Mac's & Sons. ~35#s of LR and 60#s of sand later, and I was on my way. If you are close enough, I recommend Dr. Mac's for the simple reason of being able to walk into the store and hand pick the rocks you want. From there, a little aquascaping was in order. Looking at other tanks, I decided on two atolls for my layout. 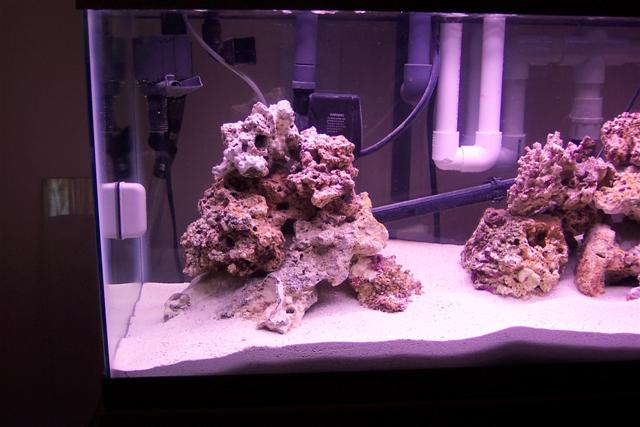 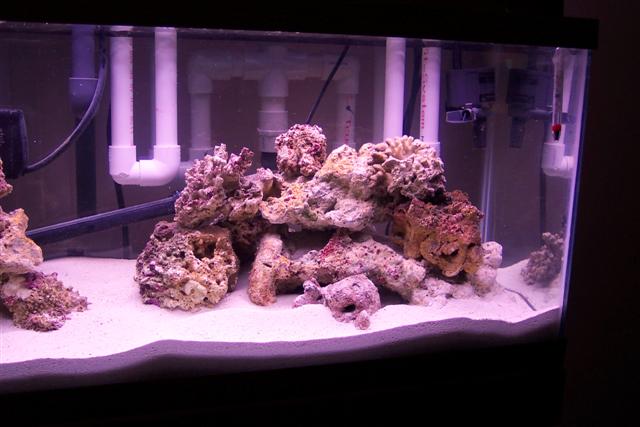 While placing the first batch of rock I noticed this little guy. 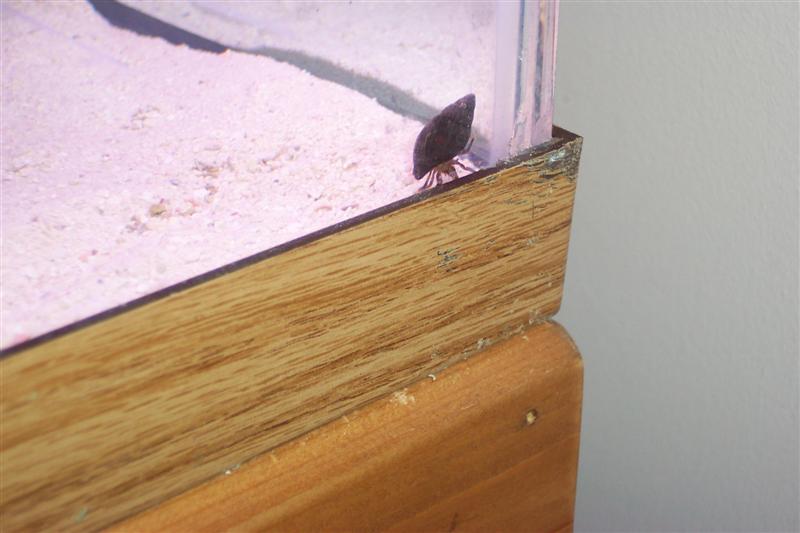 I think it is a Blue Leg Hermit

So, a week later, I have no measurable ammonia or nitrites, my pH and SG are in range, I need an alkalinity kit (in the next order) and i have diatoms galore. 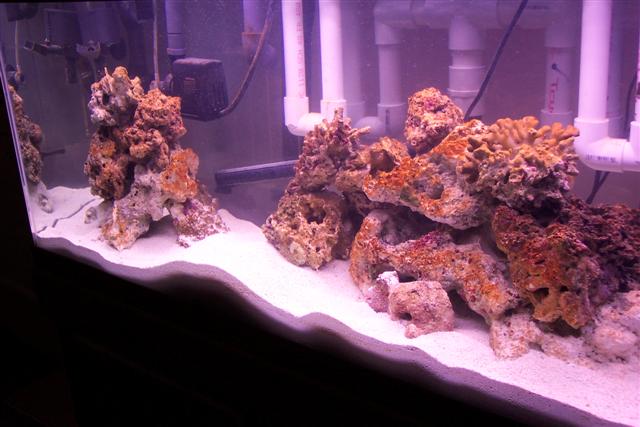 So this is where the story begins. I will have questions down the line but for now the tank is pretty bare but life is starting to make an appearance.

Heres to the beginning of a lifelong hobby / addiction.
P

Looking good. Im at the same point with my tank build. I just graduated from UM with a degree in mechanical engineering. Keep us updated on the tank's progress.

Heres to the beginning of a lifelong hobby / addiction.

Also, thanks for your thread on DIY stands. Helped me quite a bit.

Trust Me I'm an Engineer

looks like a good start. Any ideas on livestock? Reef or fish only with live rock (FOWLR)
R

pf1130, Congrats on the ME degree. Remember, the what the BS really stands for.

gary faulkner, glad the stand thread helped folks. When I eventually upgrade to the 75g thats sitting in my shed, I will be making my own stand using that same design.

mudskipper1, For livestock, I'm planning (2) clownfish, type not chosen, a yellow watchman goby and a firefish. I have already talked to Dr. Mac and he is able to get them in for me when the tank gets to that point. Probably will be without fish for another 6-8 weeks.

Doing a little nose-to-the-glass recon tonight, I noticed a featherduster in one of the rocks and the algae on some of the rocks is brown/olive green. I also found some type of anemone looking creature on the sand bed. Not sure what it is but it is very small, brown/tan/orange coloration with a light tan base. I stirred up the sand until I got it to the surface and moved it to the front corner so I can photograph it. I hope to get a good pic of it and get an ID from all you great folks here.
R

Well, like I posted earlier, I have a critter on the sand that I would appreciate an ID. I think this is one of those types of anemones that I don't want in my tank. 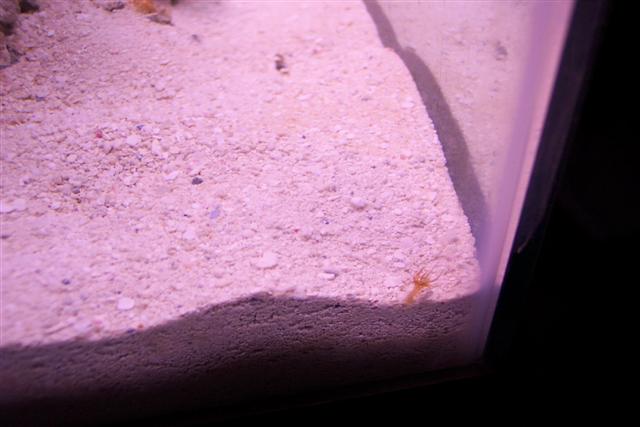 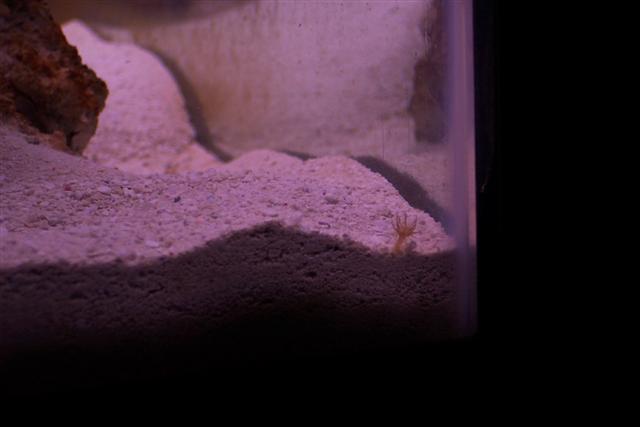 If you can make a good ID off of these two pics, let me know.

Aptasia for sure. Get it out without breaking it in pieces or get some peppermint shrimp to eat them.

At this stage, it probably will be easier to just remove by hand.

Ok, folks. Did my measurements today and the pH was 7.8 according to my very imprecise titration test. So my question is, what can I do to raise pH without affecting things too much?
A

yeah as that aiptasia is in the sand bed, I would just scoop it out and chuck it. Make sure you take the surrounding sand with it.
R

Already down the drain folks. Better safe then sorry. Thanks for the verification. How about the pH question, anyone?
A

My PH has been at 7.8 since day one. I was never able to raise it so I gave up. Everything in my tank is thriving. 7.8 is fine.

I use seachem reef buffer to maintain a PH above 8.0.

<a href=showthread.php?s=&postid=11695060#post11695060 target=_blank>Originally posted</a> by RocketEngineer
Ok, folks. Did my measurements today and the pH was 7.8 according to my very imprecise titration test. So my question is, what can I do to raise pH without affecting things too much?
Click to expand...

There are a couple of ways of doing it... for temperary raises, you can use kalkwasser (look for some mrs. wage's lime in the canning section of the grocery store). Some of the 2-part dosing will also stabalize the pH. But the real question is, how are you testing? Test kits are notriously inaccurate, so I wouldnt really rely on it. As long as the tank is healthy, and you don't see any noticeable problems, I wouldnt worry so much about trying to chase a number.

Low pH could be caused by a number of things. This time of year pH is notoriously low with high CO2 amounts in our closed up homes. Check this link for more info on causes and remedies.

<a href=showthread.php?s=&postid=11696884#post11696884 target=_blank>Originally posted</a> by crvz
As long as the tank is healthy, and you don't see any noticeable problems, I wouldnt worry so much about trying to chase a number.
Click to expand...

Now there is some good advice to follow!
O

I agree. I have always felt that a slightly off (but stable) ph is much better than a ph that is constantly swinging up and down around a "perfect" number.
M

I agree, dont worry about the Ph. New and cycling tanks usually have a lower than normal Ph. That said.... my tank wants to stay around 7.9 -8.0 all the time....I quit worrying about it and everything has been just fine for the last 18 months.
R

Thanks for the replys everyone.

As crvz said, the test kit I am currently using is probubly inaccurate and from everyones replys I am just going to leave things be for the time being. I think the less I mess with things, the better they will be in the long term.

This weekend my dad and I rearranged the livingroom and in doing so moved the tank. I was able to get the sump fully integrated and relocated the skimmer and heater to the sump. I did a power failure test and decided a couple anti-syphon holes were in order. Once those were in place, turning off the return pump results in about a half inch drop in water in the display rather then the almost two inches before. PROGRESS HAS BEEN MADE!

I will post pics tonight to show the improvements but for now everything is looking good.

Again, thanks for the help everyone.
R

As promised, here are a couple pics of the full setup. 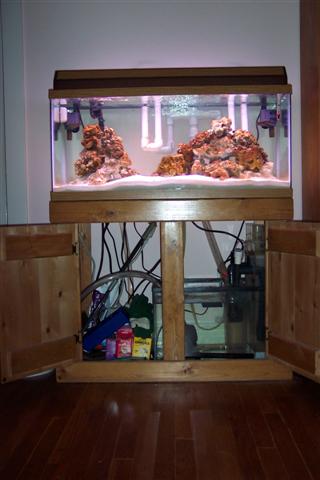 And a pic of the sump. 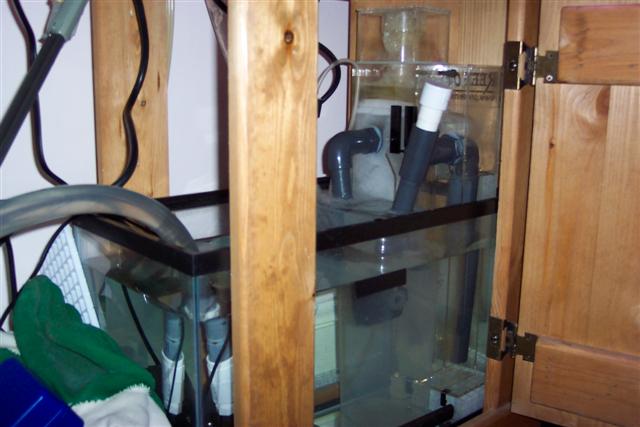 The drain from the tank flows into what used to be a juice container. The skimmer pump and drain both flow into this. The skimmer sits on an egg crate platform. The container serves two purposes, to provide a higher water level for the skimmer pump so it doesn't have to work as hard, and to allow the drain water to loose most of its air.

I'm still getting air in the overflows but I figured out a neat way of sucking it out. The overflow siphon tubes each have a one way air check valve from an air pump glued into the plug on top of the tee. I then have a piece of airline tubing for easy access. By inserting a 10mL syringe into the tubing, I can suck out the air without getting a mouth full of salt water. WORKS GREAT. With the skimmer in the sump, it has been pulling a lot more stuff out of the tank. Have to play with it some more but so far, doing its job.

Questions of the evening: the green algae everyone talks about, is it a neon green or more of an olive color? One of my rocks is covered with an olive colored algae with little strands coming off the rock itself. The diatoms are starting to die back from the looks of things, is it time for a cleanup crew or can/should I hold off for a couple more weeks?

Team RC
Hair algae can come in a few different shades, anywhere from bright green to a pretty dark green. Any chance you could get a picture? It is about the right time that you'd start seeing it in the cycle, though. One of the best snails I've ever found for controlling it are the zebra turbos. They can get pretty big, but I'd highly recommend one or two for the tank. I've got one in my 150 gallon setup, along with maybe 6 astreas, and I don't have problems with hair algae. Not sure if you're looking to order online, it would be silly for just one or two snails, but if you can find them at a LFS or have the LFS order one for you, I don't think you'd be disappointed. I got mine when I placed an order at bluezoo, and they look like this.
You must log in or register to reply here.

59 minutes ago
Paul B