I happened to notice that my PBT has had his spines or scalpels removed. I have never seen this done before. Will they grow back like a stingray spine? Is this done for ease of handling?

Not sure where you got him from but that is unbelievable! I can't believe someone would do that to a tang, and no it won't grow back. As far as removing for ease of handling, it's a fish that swims in a tank of water why would someone be handling it. Unless wherever the fish was originally distributed by had far too many tangs in far too small of tanks to make it to where they couldn't kill eachother, but either way this is by no means what should ever be done and wherever you bought the fish from I wouldn't buy from again

They are sometimes clipped before shipping so they don't slice the bags open though I think/hope this practice is on the decline...

I believe they would grow back.

maroun.c said:
I believe they would grow back.
Click to expand...

They do grow back if they are trimmed. As Humaguy said, this is usually done to prevent them from accidentally slicing their bags open and killing themselves in transit. Better a scalpel trim than a dead, dried up tang upon arrival. I've heard that this is done with most nasos since their spines stick out more, and I've seen some yellow tangs that have been trimmed.

The OP did say removal though. Are they entirely gone? Are you sure that they are not just retracted? If both are completely gone from the fish I would suspect a birth defect first unless there was scarring around the area.

I am not sure if removed or trimmed, I don't see any part of it there. I have had him for about two months and added a yellow tang to the tank. He went after the new tang but couldn't hurt him; the yellow's defense cut him up a little. I was wondering how the yellow came through unscathed and then I noticed the lack of scalpels on the PBT. I have a two spot as well and all three tangs have adapted and are doing well after a couple days of quarreling. If there is any scarring it is difficult to see, I am interested to see if they are regenerated.

Do you have pictures? What you're seeing may be normal. The scalpels on a powder blue (as well as on many other Acanthurus tangs, like Achilles) are not overtly visible like they are on a yellow tang. They stay retracted in little sheathes at the base of their tails. So you won't see the scalpel itself most of the time, especially if the specimen is small. 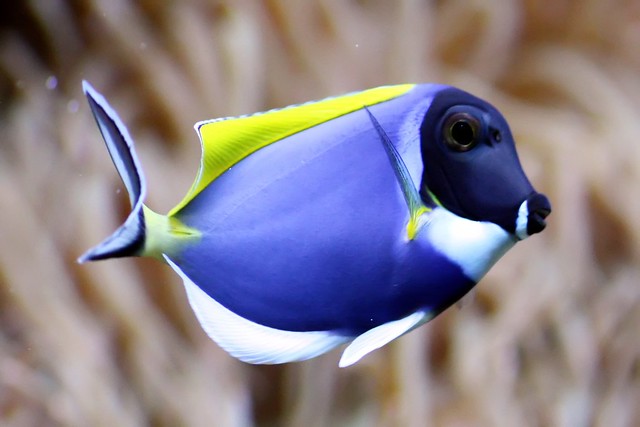 On this picture for example (not mine), you can see the slit where the scalpel is but you can't see much of the scalpel itself. If yours looks the same it is probably normal.
S

That's very interesting, i had no idea they could retract! The sheaths on mine PBT look like the picture, but I wonder why there were no scratches on the yellow when they were trying to slash one another. The PBT was definitely the aggressor but took all of the damage.

In my experience the Zebrasomas tend to inflict more damage than the Acanthurus tangs. I've had purple and yellow tangs cut up other fish when introduced, but my Acanthurus tangs usually do more posturing and chasing than anything else. If they tail slap it is usually with the scalpel retracted, not inflicting any real damage.

Your powder blue could also just be a shoddy fighter. Yellow tangs are really scrappy fish in my experience. They can be quite good at dealing out damage to other fish. Sometimes would-be aggressors just don't know what they're getting into when they go after a yellow tang. :lol:
You must log in or register to reply here.

What is going on with my frogspawn