After having kept freshwater tanks I decided to start a saltwater tank. Back in October I started really doing my research and started planning out a 29 gallon fowlr. Plans got put on hold after moving and with space limitations there really wasn't room to add another tank. A couple of months ago I started thinking about taking my 50 gallon fw and converting it into a sw, so the planning began again. While visiting a local reefing site I came across a tank and stand that I could get for less than I was going to have to pay for the stand that I needed to get for the 50 along with rock and sand which would help to lower my setup cost. So the plans have changed some more and I am now working with a tank that is 40 some gallons more than originally planned.

The tank is a 72 gallon bowfront which is not drilled. I will not be running a sump on this tank. My protein skimmer is a bubble magus nac5 hob which I got from another local reefer. I also have about 90 lbs of rock which is dried right now and 80 lbs of sand. I was also able to find a great deal on a typhoon rodi unit.

For equipment that I still need to purchase I am planning on two korilia 1050's for my powerheads. For lighting I am thinking leds, still have a lot of research to do on what is available. Until than I am thinking of using some T8 fixtures that I have around to provide light for viewing since I will be starting this tank as a fowlr and later down the road might start exploring corals. Would rather hold off on spending money on lighting to replace the fixture again down the road. I am also planning on getting a couple of brute containers one for storing my rodi water in and the other for mixing and storing my saltwater.

Here is a picture of the tank, right now it is not in the location that it will be setup in I am in the process of breaking down my 50 which will become the home of the 72.

Sent from my SCH-R720 using Tapatalk
B

As with anything in life I have had a few hiccups that I have already ran into with this build. The first problem that I had was that when I got my skimmer home and went to hang it off of the back of the tank, I found out that the inner lip of the rim was about an eighth of an inch too wide to allow the skimmer to sit on the back of the tank properly. So a trip to Home Depot to see what type of tools where available to grind down some of that rim. My collection of tools in my tool box are minimal I ended up getting a metal file set for much less than what a dremmel would cost me, which was what had been suggested on a local site. About 10 minutes later with the file and my skimmer now sits on the tank like it should.

Of course one trip to Home Depot in a week is just not enough. Later that week my rodi unit came in, when I got home from work that night I opened the box and unpacked everything. Came across my second problem. The elbow fitting that the hose connects into for the water supply was shattered. Sent an email to air water and ice explaining the situation. I had bought the unit from someone else who had not used it at all, and their warranty only covers the original purchaser. Got a reply back the next morning and after sending a picture of the piece that was broken was told by Marissa the part that I needed. So back to Home Depot with the broken fitting. Shortly after was back home and the process of hooking up the unit began. After hooking everything up and checking connections the leak test began. Of course had some leaks pushed the tubing in to the fittings more, those leaks fixed, of course new ones appeared. Fixed those and everything seemed to be good. Now all I have left is to arrange all my lines so that things look a little neater. With being in an apartment I am not able to do a hard install, and the hoses under the sink look old that I don't want to try messing with them.

I also have a friend who will be installing a gfci for me when I am ready. That will be my next planned trip to Home Depot along with hopefully picking up at least one of my brute containers.


Sent from my SCH-R720 using Tapatalk

Good luck with your build and keep us posted! I have that same tank and set up last year as a mixed reef.
B

Well a lot has happened since I last posted. My powerheads, salt and testing kit for the basics (ammonia nitrite and nitrates) came in about two weeks ago. Last week Wednesday I finishd tearing down my 50 gallon freshwater tank so that over the weekend I would be able to move the 72 into the livingroom and start getting it set up. On Saturday the boyfriend came over and installed my gfci for me and we got the tank moved into the livingroom. Forturnately I lucked out and the place where I decided to place the tank was level, checked even while adding water and no problems :bounce3:

Earlier in the day I had soaked and tried to clean off as much as the dried dead algae on my rocks that I could, left a bit of a mess in the bathtub, the results after cleaning my rock 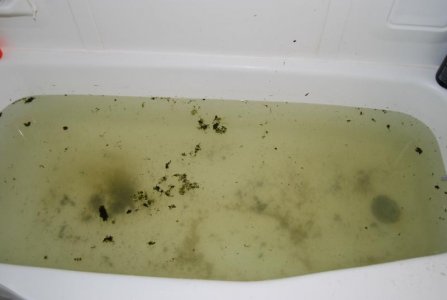 That evening I started working on my rock work, got things the way I thought I would like, added my sand in and started adding my water that I already had made up, about 20 gallons worth. I spent the next 24 hours making water, a slow process in getting the tank filled. On Sunday after having looked at what I did with my rock I decided that I was not entirely happy with my arrangement so I took out a couple of pieces of rock and added some other pieces in. Here is a picture of the first results and one of the current setup, which after almost a week I am still liking. 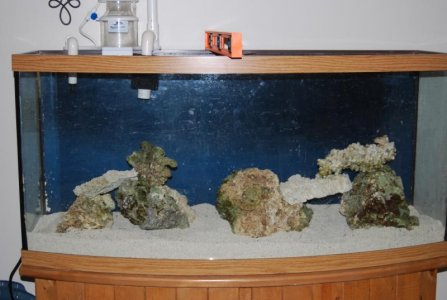 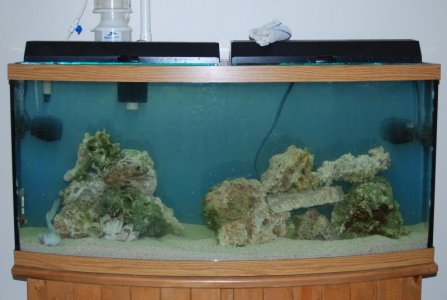 On Monday I added my piece of raw shrimp to start the cycle on the tank. I also decided at that time to test my water parameters to give me a base line ammonia was 1.0ppm, nitrite 0.5ppm pH 7.8. I have been testing every day in the morning, I know not necessary but at least while I am waiting for my tank to cycle it gives me something to do with my tank other than looking at a tank full of just rock and one piece of decaying shrimp. Yesterday decided to also test on nitrates and have readings for ammonia, nitrite and nitrates.

I have a few other ideas that I am kicking around for this setup, one of the things that I am thinking about working on is a hob refugium using an aquaclear filter. One of the fish that I really like is the mandarian dragonett, but with the current setup I have my doubts on how well I would be able to keep an established pod colony in the tank to feed it. I am thinking that with setting up a refugium that I might be able to provide for the needs of this fish once I let my system mature for awhile. A under the tank refugium is really not feasiable but I could do an hob. For the purpose of farming pods I am thinking that the aquaclear diy would be able to meet my needs. More research to do on that.

i have the same tank and stand, but black. i have a couple of Koi's in them right now, but i'm ready to break it down and turn it into a SW tank soon.

tagging along!
You must log in or register to reply here.