My tank is a new setup - empty except for live rock. Up until now I've only been running my T5's because I didn't have a way to cool the canopy.

My canopy houses four 36" T5's and three 250w DE MH's. The canopy is about 8" high, so the MH's are about 5" from the tank's glass tops. The back of the canopy is almost completely open - otherwise it's fully enclosed.

I have four 4" Coralvue SMART fans and I'm wondering how to orient them for biggest impact. All pointing in? 2 in, 2 out?

In In Out Out (how I currently have them)

In In In Out (would it bring in more "cool" air and force more through the final fan?)

Thinking all IN wouldn't do much since there's no place for the heat to escape to.

I did a 3 hour experiment and ran the MH's without fans - tank temp increased 0.1Ã‚Â° every 10 minutes and climbed steadily the full 3 hour period. With the fans, temp increase 0.1Ã‚Â° every 30 minutes - but I only left them on for about an hour, so I don't know if it'd keep climbing.

Anyone have any thoughts on how to orient my fans for optimum cooling?

all fans in with a nice open hole opposite the fans somewhere.

the most cool air will get in with all fans pointed in and an opening for the hot air to exit.

My canopy is completely enclosed on all sides and top. I have a single 120mm fan in each end blowing in with four 4" holes in the very top directly over the reflectors so I take advantage of convection as well as forced air. Light does not escape but heat does. The fans are hooked up to a DC variable voltage power supply so I can vary fan speed with seasonal changes in temperature.

....Thinking all IN wouldn't do much since there's no place for the heat to escape to.

Ummm...? You contradict yourself a bit there.

Based on your statement that the back of the canopy is almost completely open, I would recommend all fans pointed In. 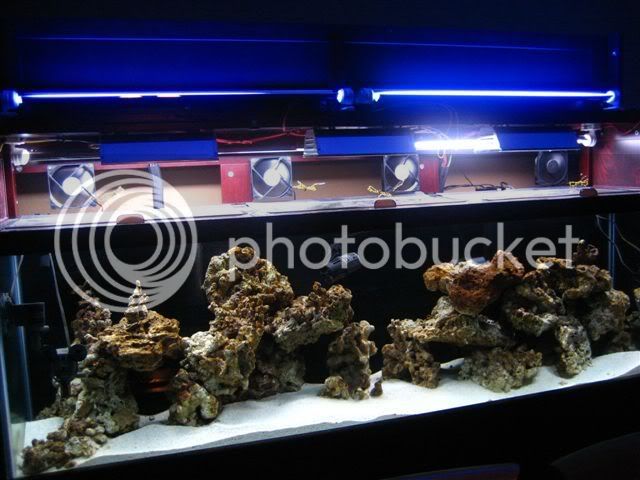 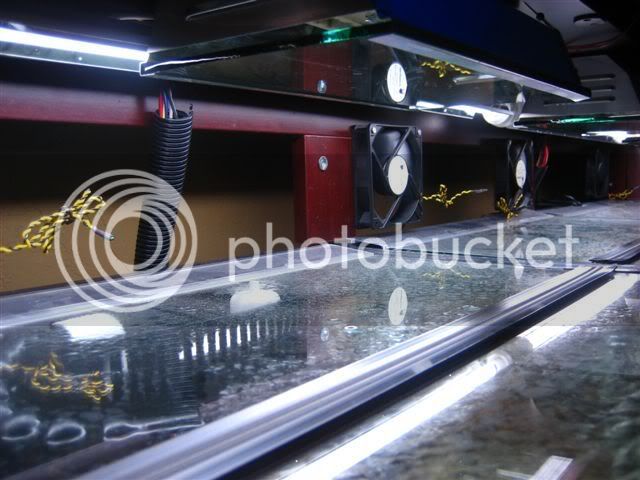 Do you guys think there's enough open space where "all in" would work?

Yes, plenty of space for hot air to exhaust.
T

I would think the glass tops are going to transmit radiat heat down into the tank and the fan's won't help with that.

Premium Member
I currently run 3 400 watt halides and have one fan blowing in on each end with a fan on the sump in the summer. My tank rarely gets above 82 using this method and I live in the south. I am going to add two fans into the top of the canopy blowing out to help a little more when I change my lighting.

Master of the 16 hour day

Team RC
You have plenty of open space in the back, I would point them all in. With the canopy so close to the wall, you may get some recirculating air, if you want to get crazy, you could duct the fan intakes to pull from a lower area. I would also take the glass tops off of the tank and see how much your temp drops.

Have all fans blowing into the canopy & loose the glass covers.You are trying to promote evaporation when using fans (as well as disperse the hot air from the bulbs).If the water surface is covered by glass,you will not get the cooling effect of the fans & the glass covers can act almost like a greenhouse.Like the others said ,you may want to drill a few vent holes to add positive ventilation,rather than possibly recirculate warm air from the back of the open canopy.Lastly the fans are more effecient at pushing air in & will last longer.When they are used to pull out warm humid air,they may corrode over time.HTH

Thanks guys. I spun the fans around and will see how the temp goes with the MH's tomorrow. I do also have 2 fans in the stand too (on 40g sump). Earlier today I turned the 3rd fan to point in and my T5's are actually cool to the touch. I'm thinking all 4 pointing in will keep everything really cool.

I know the glass tops are going to work against me, but they're a necessary evil. My wife cannot STAND humidity. We have central air and still run 2 dehumidifiers in the summertime (one in the basement, one on main level) just to keep her from crawling out of her skin.

Her big complaint when I was setting up the tank (pre-glass covers) was that it made the room really humid. I'll lose them in the summer because the A/C and dehumidifiers will take care of the humidity the tank puts out.
You must log in or register to reply here.

Programming my heater/ fan is seriously startung to hurt my brain...