Need advice: my maroon clown spawned, and I do not know what to do

I have a pair of golden striped maroon in my 50G tank, which are very territorial (they declared the front center of the tank their land), and bullied other fish often. So I have been thinking about removing the the clowns for a while. Recently, they get more aggressive, so I decided to go ahead and remove them. I succeeded in removing the large female, but have a lot of difficulty removing the smaller male. I spent the weekend making an acrylic fish trap, and the male clown refuse to go inside even though other much more shy fish went inside. Then I saw the small male got some injuries on its back fin (I do not know where it came from), so I did a more careful check. Guess what I found? I found a whole bunch of egges hanging off the trunch of my big leather coral, and the male is guiding it (that's why it does not even go close to the trap). Now I am really feeling bad about it, removing the female right after it spawn, the injury on the male, and I have no idea what to do with the eggs

I would appreciate it if anybody can share any information about the eggs. Should I try to take them out (but they are attached to leather coral), what does it take to raise frys, should I put the large female back? Thanks much for your help!

Editted: I just snapped a picture of the eggs at the trunk of the leather. I swear the eggs looks like small clowns with a light dot which looks like eyes. I am putting the larger female back into the tank now. 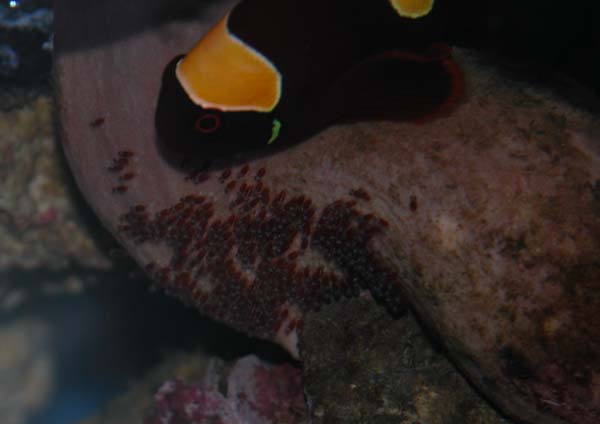 from my knowledge, put the parents in... they will protect the eggs and fan it with their finds to oxygenated them. After the eggs hatch, siphon the babies out and put them in another tank.

As for feeding... i'm not really well-read in that area
T

This is very strange I put the female back in, went out to do a little shopping. When I come back one hour later, there is not a single egg left. Did the female eat all the eggs? When should I expect the next batch of eggs to come. What should I do to prepare for it better?

I think they ate the eggs. My Dad had angel fish that would do that ... lay eggs, then eat them. Ditto with a pair of finches (birds). They'd make a nest, lay an egg, then have it for dinner a few days later!

I think what happens is that when things are stressed, they eat their own eggs. I dunno, maybe the instinct is that there is some predator in the area and rather than "waste" the eggs as food for the predator, they eat the eggs themselves to at least recover the nutrient value of the eggs. ???

Or maybe they're just bastards.

Carpus and Vince, thanks much for the info. I remember I read some time ago about putting a tile close to where they nest so they will lay their eggs on it, but cannot find the thread anymore. Anybody have any pointer?

it is quite uncommon for the clown to eat their own eggs if they're fertile. They will almost certainly lay eggs in the exact same place next time (if there is a next time.) Usually they will fall into a very regular pattern of egg laying once they start. Keep them well fed and see what happens.

The eggs take between 8 and 12 days to hatch and typically hatch just after lights out.

Pulling out the female was about the worst thing you could have done but you had no idea they even laid eggs so don't worry about it at this point.

If they start laying eggs again and you're interested in raising the fry get a copy of Joyce Wilkerson's book "Clownfishes" it's the de-facto standard for beginner clownfish breeeding.

There are a lot of people raising clownfish from eggs over in the clownfish and anemone forum here at reefcentral. They'll happily answer any questions you have.

Can you try a piece of PVC pipe in the same area and see if they will lay eggs on it? Or put a pice or rock in that area? Sucks that they chose the trunk of a leather!

But exciting! At least you know they WILL lay eggs!

Staff member
RC Mod
Possibly due to the time the eggs were unfanned they had developed fungus, or they had lost the right 'smell', and the parent did not recognize them. Now that they've recovered the nutrient, they'll be in prime condition to breed again. Fish have to be optimists in that regard---and pragmatic. The ocean is full of misadventures, and the thing that would most damage them is to lose that protein to invaders.
You must log in or register to reply here.