I had originally purchased the 16.5Ã¢â‚¬Â 70w Sunpod for our 12gal Aquapod knowing I would eventually attempt to change the 70w to a 150w. I apologize for the lack of pics. For some reason once I get started on a project I get so engrossed in getting it done I forget to take pics.

First I took the fixture apart to see if I thought the 150w ballast would fit. From what I saw in the fixture and the dimensions on the site for Sunpark ballasts it looked like the 150w was only a little larger than the 70w and would fit, although I figured it might be tight. So with that I decided to try it.

I purchased the following: 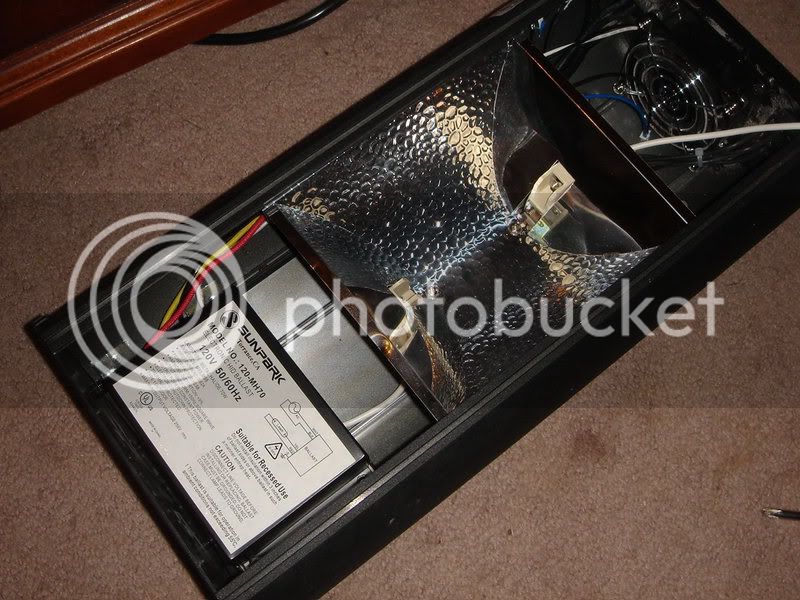 The socket and reflector are held to a bracket by two screws. After the screws are removed the socket and reflector come out easily. To remove the socket you will need to cut a zip tie that holds the wire to the bracket and then un-crimp the two wire nuts (the wire nuts in my fixture are clear) securing the two sets of wires together. I left the bracket in place as the screw holes fit the 150w socket.

This pic shows the brackets for the ballast and the bracket for the socket/reflector as well as the two clear Ã¢â‚¬Å“crimpÃ¢â‚¬Â wire nuts and the two orange three wire connectors. 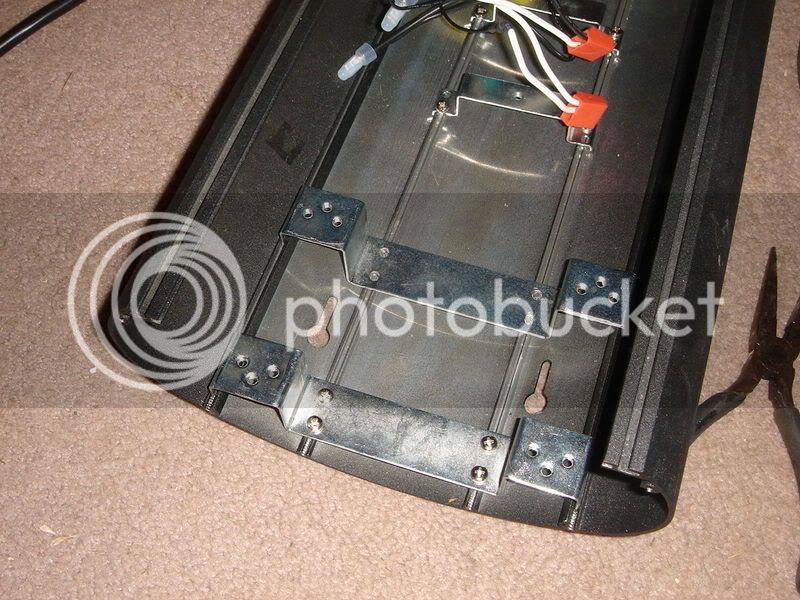 As soon as I unpacked the 150w ballast I realized it was larger than I had originally thought it would be. 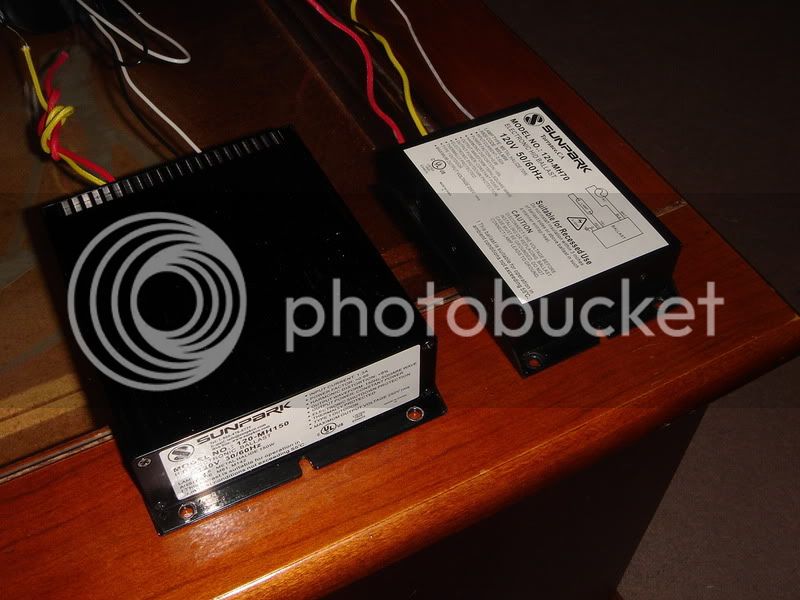 Holding it next to the fixture prior to starting the project I knew it would fit it was just a matter of how much modifying I would have to do. After getting everything removed from the fixture I attempted to get the 150w ballast into the fixture. It was too large so I had to remove the end cap of the fixture and then the ballast slid in nicely. Looking at the bracket for the 70w ballast I figured I could modify them to fit the new ballast.

To remove the ballast brackets you must remove four screws per bracket. * (The top of the fixture is actually three long pieces held together by the two end caps so be prepared for the pieces to come apart). The three pieces are pointed out in the pic below where the yellow lines are drawn. 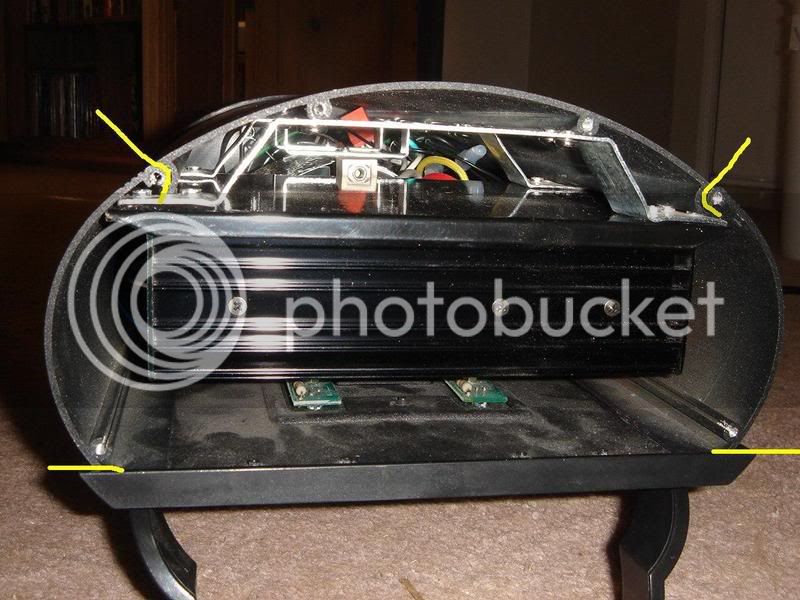 The four screws do not have dedicated holes and instead screw into the horizontal guide seen in the pic below. This allows for fairly easy relocation of the brackets to accommodate the larger ballast. 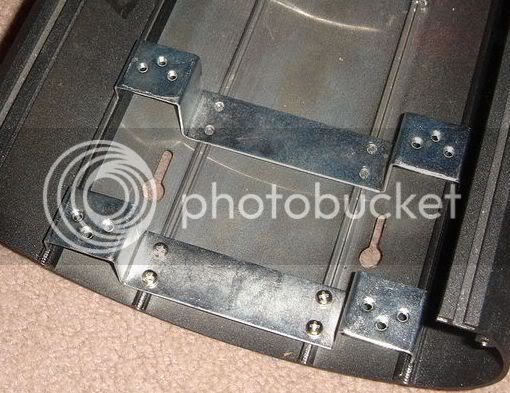 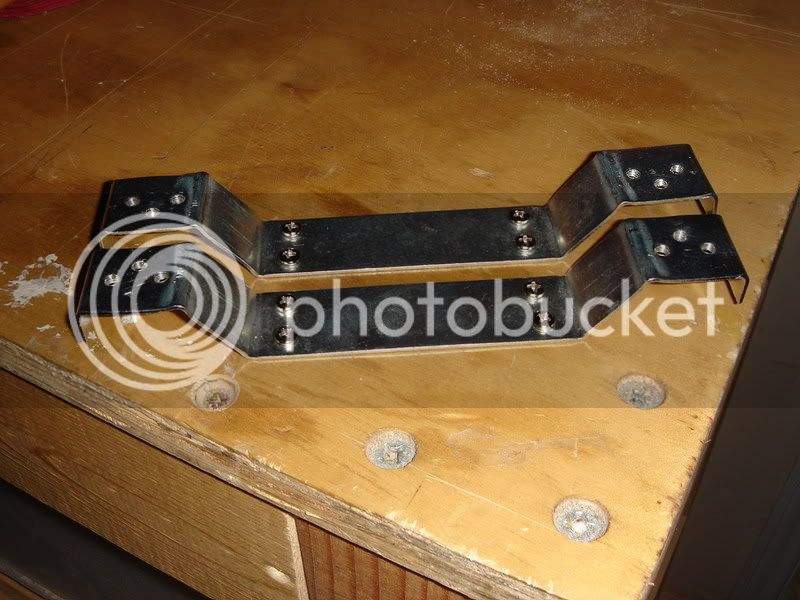 After modifying the bend it increased the overall length of the bracket so I had to further modify it by removing the smaller 90 degree bend on the ends (shown in the pic above). I also had to cut off an additional 1/8Ã¢â‚¬Â off each end. To cut the ends I used a Dremel with a multi-purpose cut-off wheel. The pic below shows the brackets after they were modified and the 150w ballast was installed into the fixture. 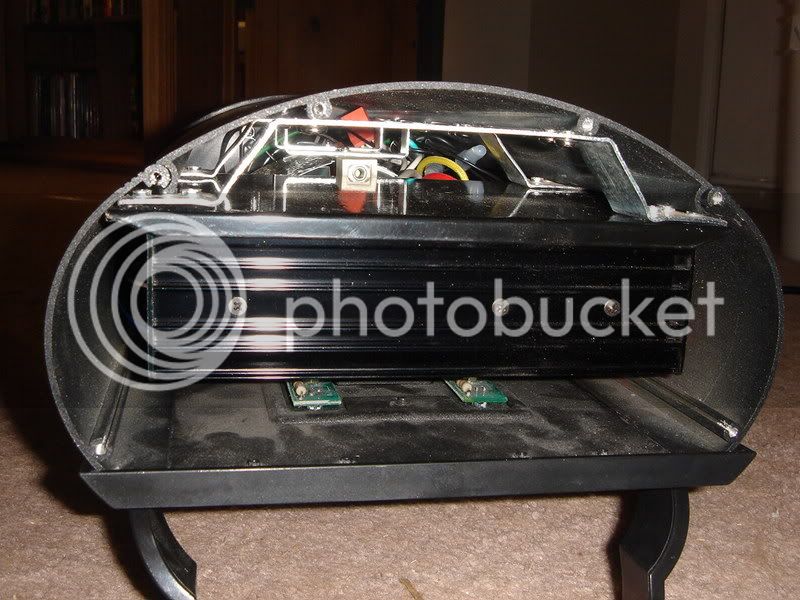 After the brackets were finished the most difficult part was getting them screwed back into the fixture so the holes in the ballast matched the holes in the brackets. After struggling with this for a while I decided to install the first bracket and screw the bracket down tight. I then screwed the same side of the ballast to the bracket but left the screws lose thus giving me a little room to adjust after I got the other bracket installed. Next I placed the other bracket under the other side and lined up the bracket and ballast holes. I then removed the ballast while holding the un-installed bracket tightly. I then screwed the second bracket down tight. Of course all of the holes didnÃ¢â‚¬â„¢t match up exactly so as I was screwing the ballast to the brackets I left each screw lose so I could move the ballast around insuring I was able to secure the ballast with all four screws. Since I was able to use the brackets that came with the fixture I was also able to use the screws that came with the fixture.

After securing the ballast into the fixture it was just a matter of reversing the process and putting everything back together. The 150w ballast comes pre-wired so I just used the wire nuts/connectors that came with the fixture to connect the wires of the new ballast to the new socket. As you can see in the third pic, the wires on the 70w ballast are the same color as the wires on the 150w ballast so it made connecting the new ballast and socket easy. In my fixture the wires for the moonlights were not secured to the fixture so I marked them with a piece of tape so I could re-connect them correctly. As I stated above the holes in the new socket fit the holes in the bracket attached to the fixture so I was able to use both the existing bracket and screws that came with the fixture. The 150w socket is Ã‚Â½Ã¢â‚¬Â longer than the 70w socket so the space in the reflector cut out for the socket was too short. This is an easy fix as the sides of the reflector are loose and can be bent to accommodate the larger socket. 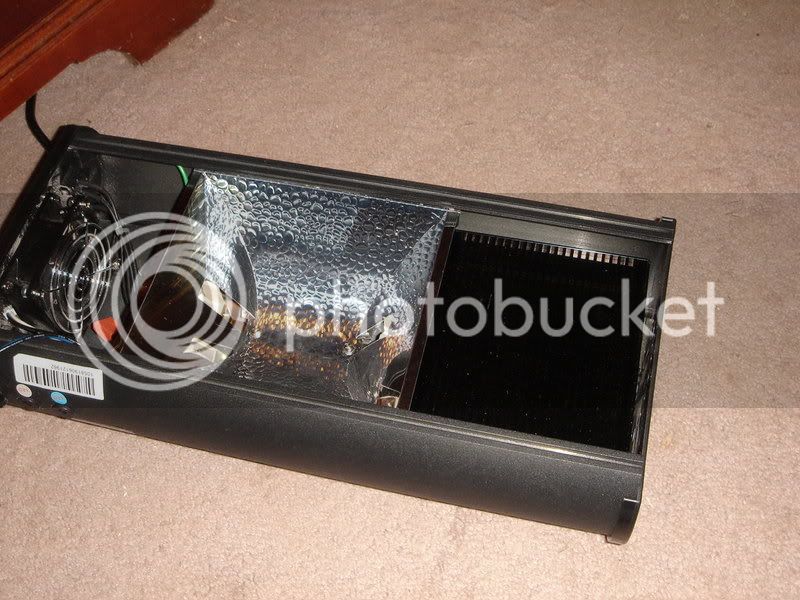 All in all this turned out to be a fairly easy mod. I have been running it for about two months now and have not had any issues.

Also, so far I have been very impressed with the 150w Radium. I really like the color and my sps corals seem to be responding to it positively. ItÃ¢â‚¬â„¢s still a little early to judge growth rates but I can definitely see new growth.
W

so did this cost less than upgrading to a 150 sunpod? Just curious would you need to buy the new socket?
W

the link of rht ballast didnt work where did you buy it at?

just wondering if you have pics of the tank? Also hows it working out for you with the new 150 is it running hot at all?

I'll try to get some pics later today, although be forewarned I suck at taking pics.

With summer setting in and outside temps around 95, house temp around 76, the tank was getting up to 83-84. Just to be safe I went ahead and put an Ice Probe in a HOB on the tank. The Ice Probe has been keeping it at 81.5.

I love my 150w 20K Radium. They're awesome.
You must log in or register to reply here.