My gf bought this coral at the LFS. They called it a wallflower coral, but I cant find anything under that name online. Maybe Im just not looking hard enough.

Sorry for the cellphone pic
J

Never seen that but I want one!

Sorry for the cellphone pic [/B]
Click to expand...

BTW, not bad for a cellphone cam.

its definitely a euphyilla species. I have heard people call frogspawns and hammers octo wall corals before.
R

I actually got a better pic with the voyager than I could with my gf's point and shoot, lol

eventually we will get a decent camera
R

<a href=showthread.php?s=&postid=14190236#post14190236 target=_blank>Originally posted</a> by DevilBoy
its definitely a euphyilla species. I have heard people call frogspawns and hammers octo wall corals before.
Click to expand...

Interesting....its definitely unlike any hammer or frogspawn we have seen before, havent seen any others like this come into either of the two LFS. Each extension is more balloon like instead of tentacle like and each one has many spots on it instead of just one or two on the ends.

Here is another pic under the actinics

Can't find the proper scientific name but ya, its a variant of Euphyllia:

Must be on the rare side because not many pics. Wish I could get a frag of it.
R

Must be on the rare side because not many pics. Wish I could get a frag of it.
Click to expand...

Thank you for the find!
N

They have it labeled wrong though... its not Divisa . I'm really having a hard time finding more pics of that variety!

Must be on the rare side because not many pics. Wish I could get a frag of it.
Click to expand...

Its not rare it is either Euphyllia Divsa or Euphyllia paradivisa the common name is frogspawns. With out knowing about the skeleton you can not tell which...

If it's not rare (that variety) then show me where I can buy one please.

I do not know what you mean by variety.. There are two frogspawns... They are the two species I listed above.. They are either branching or vase type , Sometimes there can be a hybrid between Euphyllia sp... Tentacle length width is affected by flow and lighting.. I would guess that on is under lower flow because of how the tentacles are laying and swollen but it could be because it is not fully acclimated yet.. They are very aggressive coral too, they will put out very long sweepers and need lots of room. They are relatively easy to care for.. It was one of my first corals 20 years ago. Keeping your calcium levels and alk. up will help or this coral can suffer since it is a stony coral.. They also do well under medium to low levels of light... They also like medium flow, high flow can tear them and they will usually just stay contracted.

If you want to learn more about it I believe I did a coral of the week on it under the archives.

Frog spawns are available at pretty much any lfs. Probably not allot of online vendorÃ¢â‚¬â„¢s carrying them because they deal mainly in high end corals and this is not a expensive coral. It is one of my favoriteÃ¢â‚¬â„¢s... And the one in the thread starterÃ¢â‚¬â„¢s pic is looking really healthy,

That is some severe swelling then. I thought the puffed appearance meant it was a different variety.
L

I have the same except its a bi color. With teal tips and the neon green 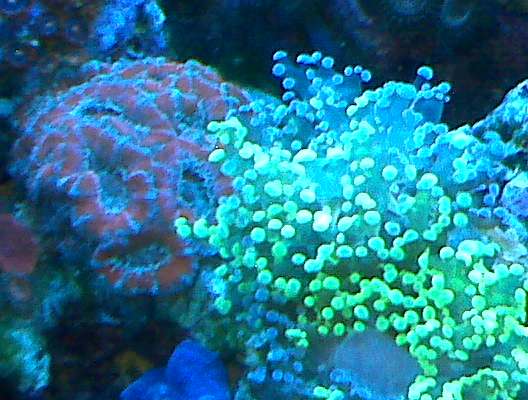 <a href=showthread.php?s=&postid=14191027#post14191027 target=_blank>Originally posted</a> by notabun
That is some severe swelling then. I thought the puffed appearance meant it was a different variety.
Click to expand...

The tentacles can be different from hour to hour, from completely contracted to completely stretched out. Lower flow seems to make them stretch out less but to much flow makes them stay hidden. Also aggressiveness can make the stretch out farther and is seems like this happens allot at night too... They can have some of the longest sweepers out there. The one by the tread starter may still be aclimating too and cause it to look like that.

The colors can be anywhere from pink to green, I think this has more to do with lighting though than anything. But pigments can be different in the same species.

That coral cost my girlfriend about $100 at the LFS. I don't believe that is the case with most online vendors.... you can buy all sorts of coral from online people... they don't just do high end stuff... but this wasn't cheap....
R

Hey, im back, that was my gf chimming in there and pretending to be me, lol.

This guy swell as the come out more, but they always have a round, bubble like look, they just get larger as the coral comes out more. That and the spots all over each extension made it seem much different than the frogspawn we have seen in the LFS and online, hence why I decided to ask RC

FWIW, one of the LFS did have one that looked like ours, excpet white instead of green, like the picture notabun linked, in their personal tank. It had been in the tank for a long time and still had the round, balloon like extensions. That made me think it was some odd frogspawn morph or different variety.

I'll try to remember to get a picture of it night when it tucks in so you can see the skeletal system. As to what kind of flow it is in, I still dont know what constitutes high-moderate-low flow, but this coral has as much movement as anything else in the tank, i would considerate it moderate flow. Its been in the tank for at least 2-3 weeks now.

Whatever it is, its a cool one, lol. Thanks for everyones input!
You must log in or register to reply here.