Just the facts on Tangs

With a few more suggestions I`m going to try this thread again and hope it will still be a group effort.

Here is what I have learned from others:

Include the picture of the tang

Characteristics and Compatibility:
requires much attention. It is highly susceptible to contracting ich, and can have problems with HLLE.
It can be aggressive towards other surgeonfishes, especially those of its own kind.
Large adult specimens in particular fight terribly if not given lots of space to keep them apart. With the possible exception of providing are very large system with more than ample room to swim around and plenty of places to hide,

this fish is best kept singly. Often hard to acclimate.

Diet and Feeding:
Primarily a herbivore that will graze on filamentous micro and some types of smaller fleshy macroalgae.
Often a difficult fish to feed, it should be fed frozen and dried fares suitable for herbivores that contain marine algae and Spirulina (blue-green algae). Zucchini, broccoli, leaf lettuce, and nori (dried seaweed) can be offered to supplement its diet. Should be fed at least 3 times a day.

Habitat:
Requires lots of room to swim around, and plenty of places to hide. A constant grazer, this fish is best kept in a well established aquarium with a hardy growth of marine algae to graze on at its leisure.

Reef Tank Suitability:
Considered safe, but an individual may decide to pick at large polyped stony corals if not well fed.

Guide Notes:
It is sensitive to ammonia poisoning, is an extremely difficult species to handle, and therefore should only be kept by an experienced aquarist.

it is best to ask to see this fish eating before you buy one.

Fast Facts This beauty has alternating yellow and blue lines running down the body and a white belly.
It is very active and needs a big tank with lots of unobstructed swimming room and clean, highly-oxygenated seawater.
Usually slow to begin feeding
it is very susceptible to ich and the aquarist should be prepared for these inevitable infestations.
It is capable of instantaneous color change. For example, the head will become dark and the body pale when it attacks intruders.
Like most tangs, well-acclimated, comfortable specimens may be aggressive towards close relatives.
It typically fares notably better in reef aquariums than in fish only tanks.

Diet and Feeding Herbivore, provide with a varied diet that includes frozen and flake foods for herbivores as well as dried algae sheets.
Ease of Care moderate

Distribution: Extends from Hawai'i southward to central and eastern Polynesia and Australia, then westward through Micronesia, Melanesia and the Philippines, through the East Indies, and across the Indian Ocean at least as far as Mauritius. Apparently this species does not inhabit this entire area, and specimens from various localities do appear somewhat different in structure and color within this area.

Average Size: To about 5 inches, with large specimens reaching about 7 inches.

Habitat: Predominately inhabits the shallow waters on the outside of the reef where algae is plentiful, but commonly found out to depths of about 40 feet, and sometimes deeper.

Characteristics & Compatibility: Even though the Kole Tang is one of the less aggressive Surgeonfishes, it will battle with its own kind, and possibly with close relatives.
Because it is less aggressive it may also be picked on by other, more aggressive Surgeonfishes.
For this reason it is best kept singly, one per tank
but it does make a good choice when it comes to compatibility with other more docile, non-related species.
To reduce compatibility problems, if you decide to put this fish together it generally helps to introduced them into the aquarium at the same time.
Like all Surgeonfishes, the Kole has a very sharp spur or razor by the tail. It may seem small, but it can inflict a pretty nasty cut. Therefore, use caution when handling this fish.

Diet & Feeding: This fish is a workhorse when it comes to eating various types of algae in an aquarium, particularly brown diatom microalgae.
The Kole Tang spends it day constantly grazing and eating, so providing it with an environment with plenty of algae growth is best.
However, beware not to put one in a small reef tank, as it can do a lot of damage if you have delicate plants and algae growth that you want to keep.
In a very large reef tank the plant growth can recover, as the Kole has so much to pick from.
The Kole Tang adapts to eating tank fed foods extremely well. It will accept blue-green alga Spirulina, fresh romaine lettuce and other vegetable matter such as broccoli and zucchini.
It likes nori (dried seaweed), flake foods made from dried marine algaes, and will even nibble on some meaty foods like dried shrimp and blood worms.

When feeding with fresh romaine lettuce, broccoli or other fresh vegetables, place these foods in the freezer long enough to partially freeze them, then let them thaw out. This helps to break down the tough fibrous matter in the plants and allows the fish to digest them more easily. You can also blanch them to get the same results

D to the P 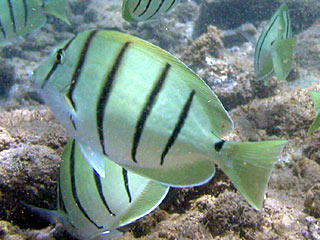 Foods: Mostly vegetarian. Feed foods that contain Spirulina. Can be fed zucchini, brocoli, and nori. Usually benefits from multiple feedings a day in tanks with no filamentous algae.

Reef Compatibility: Usually safe, but if underfed may nip at coral polyps. Usually not a threat to other inverts.

I do believe the picture you have posted for the desjardini tang is the standard (verliferum) species. I know LA has it listed otherwise. I have emailed them about this and they do not seem to care

please email me instead of making comments on this thread otherwise the thread will lengthen and lose its impact of being able to scan through it quickly.
It will be much appreciated if you could just follow the suggested outline if you wish to post
thanks
Scott

Fast Facts
This species is black overall with a very long snout. Large specimens have a greenish-silver streak down the upper part of the body.

This species is collected only from Christmas Island in the South Pacific and is rarely available.

It is one of the most peaceful members of the genus, and like other Zebrasoma, it is generally easy to care for.

The main thing you'll want to know is Black Tangs are few and far between, there's always a waiting list and they sell in an instant.

Diet and Feeding Herbivore, provide with a varied diet that includes frozen and flake foods for herbivores as well as dried algae sheets.

Level of Care: The Black Longnose Tang is a medium maintenance fish.

Behavior: The Black Longnose Tang may act aggressively toward other fish.

Compatibility: It doesn`t get along with other tangs. Better to acclimate last into larger groups.

General Notes: Filters pose a threat to the planktonic offspring. Zebrasoma rostratum (Gunther 1875), the Black Longnose Sailfin Tang. In many ways, just a darker, longer-snouted version of Zebrasoma scopas or flavescens (rostrum up to 30% of body length). Likewise a hardy, undemanding aquarium specimen.

D to the P 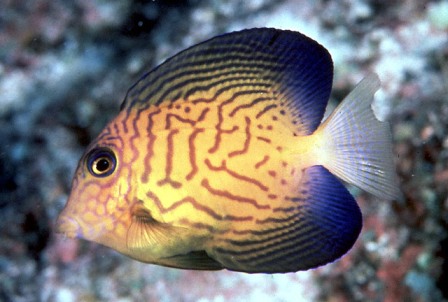 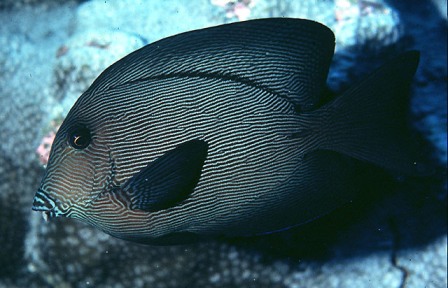 Difficulty: Moderate. Usually hardy once acclimated. Can be prone to ich.

Foods: Mostly vegetarian. Feed foods that contain Spirulina. Can be fed zucchini, brocoli, and nori. Usually benefits from multiple feedings a day in tanks with no filamentous algae because it spends most of its days grazing.

Tang Compatibility: Does not do well with heterospecifics. Usually the target of bullying by other tangs as it is not very aggressive. Generally best if it is the only tang in the tank, except in rather large tanks.

Other notes: Like other members of the genus this tang will change colors as it becomes mature. It is a rare tang even in nature so it usually commands a high price. Does best in oxygen rich water (ie temps around 77 and good water flow), and tanks aquascaped with caves and ledges for it to swim amongst.

Maximum Size: the Zebrasoma scopas grows up to 12 inches.

Level of Care: The Brown Scopas Tang is a medium maintenance fish.

Behavior: The Brown Scopas Tang may act peacefully toward other fish.

Hardiness: This is a hardy fish.

General Notes: Less attractive and flashy than it`s related Zebrasoma cousins, the Zebrasoma scopas is an appearling utility fish to many knowledgeable aquarists. This fish is well known for it`s constant grazing abilities and will eat not only filamentous algae but often enjoys Valonia and Bryopsis as well. Like many tangs, the Scopas Tang maintains a territory and will defend it from similar fish. Keep only singly unless kept in a very large system.

Maximum Size: the Acanthurus pyroferus grows up to 10 inches.

Hardiness: This is a hardy fish.

General Notes: The Juvenile Lemon Peel Mimic Tang mimics that of the less palatable spiny Lemonpeel Angelfish (Centropyge Flavissima). Will lose coloration as an adult and gain a brownish gold color. Excellent for algae control in reef aquaria. May fight with other tangs.

Good idea for a thread but needs 'minimum tank size'

Care Level : Easy to Moderate, can be quite hardy once acclimated.

Temperament / Behavior : They may be aggressive with other unicorns in smaller tanks but may do ok in multiples in extremely large tanks. They also are constantly on the move during the day and will need a larger tank for swimming space.

Compatible Tank Mates : Avoid keeping them with other species of tangs.

Reef Tank Compatible? : This saltwater fish should do fine in a large reef aquarium.

Diet / Fish Food : Primarily an herbivore and feeds on marine algae in the wild. Try to give them a variety of marine foods but predominantly marine algae and spirulina. Having plenty of live rock for them to graze on helps. They should accept vitamin enriched flake foods, frozen and live foods.

Tank Region : All over

Gender : Difficult to determine the differences between males and female unicorn tangs but in adult specimens the horn may be more pronounced in males.

Other Points
They can be fairly hardy once acclimated and should play nicely with other non-tang species but may get bullied by more aggressive fish such as Triggers.
You will also need highly oxygenated water provided through increased surface agitation (multiple powerheads) and/or the heavy use of air stones.

Unlike most other tangs which have only 1 set of retractable blades at the base of the tail, the Unicorn Tang has two sets of retractable blades for defending territory and protecting themselves. They can easily get caught in netting, so be careful transporting this fish to avoid damaging the fins.

It's advisable to use a large container instead of a net when moving this fish.

Great thread Capn_? This is going to help a lot of people out. Do you mind if i help put some information up about tangs.
M

I noticed you don't have any info on Naso Tangs. I just purchased a baby Naso and he is not eating frozen food i feed the other fish in the tank. he will only munch on algae purchased from the store i got him from. he looks VERY skinny. what should i do?? how do i get him to eat other foods besides fish-store algae?
You must log in or register to reply here.

S
Periphyton on your rocks

D
If there are no signs of velvet/sickness, is it safe to return fish to display tank?