Tank finished the first cycle about 4 weeks ago. It is as follows:

Nova Extreme 4 x T5HO Lighting. Actinics were running for about 9 hours and Whites for about 7 hours per day.

About 3 weeks ago I had a Diatom Bloom that disappeared in a few days. (Thanks everyone for telling me to wait patiently) I've been doing about 15-20% PWC a week for the last 3 weeks (Since the Diatom Bloom)

About a week ago I started seeing some green algae on the rocks and it's getting worse and worse. I've tested the water and all is well. PH 8.4, 0 Ammonia, 0 Nitrites, VERY low Nitrates (Between 0 and 5ppm) SG 1.025Phosphates seem to be zero although with the API Phosphate test 0 and 0.5 are very similar....... Temp is 78.5.

Any thoughts or suggestions?

Should I cut the light down further or even switch it off for a while?

There are too many conflicting schools of thought to be a right answer. There is no law or harm in making the algae disappear if you want. If you subscribe to the opposing school of thought that initial algae is natural and go away naturally, leave it.

For my house, no reef tank ever runs me, i run it. i simply don't allow algae ever, so i never see any. I have never tested for, nor cared what phosphate levels are, in ten years of reefing. But i watch others toil endlessly...so many schools of thought here!
B

got any pics of it? it could possibly be green coralline algae, but without seeing it, its hard to tell

Cutting back on light is only a temporary measure. I think the real challenge is to beat algae with the light as you want it when you're fully stocked. My suggestion to you is to keep up that patience. Make sure you are using RO/Di and that your filter is correctly setup. Many times it's happened that people keep adding 'pure'water and one of the cartridges was installed backwards or upside down or they were collecting from the flush line, etc. Beyond that, manual removal should be used to keep the bloom at bay. Continue your diligent 10% weekly WC and you should be able to beat the algae. The worst case scenario is that your rock is leaching phopshates and that's a real PITA. Get a second opinion on your tank readings and test a new saltwater sample as well. Maybe cut back on lighting if you have it on for more than 6 hours a day... and finally, don't overfeed the damsel. For one fish, the equivalent to 6 flakes a day should be enough for subsistence. And consider getting an urchin...
Good luck with things!
K

I'm using a TDS meter on the RO/DI and the supply water measures 125ppm. The RO water is coming out at 0ppm, occasionally 1ppm.

As far as patience is concerned, is this something that will go away as long as all levels are good and I keep doing PWCs? If so, great!!!!

brandon429 said:
There are too many conflicting schools of thought to be a right answer. There is no law or harm in making the algae disappear if you want. If you subscribe to the opposing school of thought that initial algae is natural and go away naturally, leave it.

For my house, no reef tank ever runs me, i run it. i simply don't allow algae ever, so i never see any. I have never tested for, nor cared what phosphate levels are, in ten years of reefing. But i watch others toil endlessly...so many schools of thought here!
Click to expand...

If I want the algae to go, what is your suggestion(s)? I'm sure there are many schools of thought, but would be interested to hear yours..... and any others. I'm learning as much as I can and the more information offered by enthusiasts, the better.

From 2001 to 2011 when algae grew, I would drain the tank down all the way, exposing the algae areas, and shoot them with direct fire from a blue jet wind proof lighter. Hard to grow when your head keeps getting burned off

Some people have their initial algae go away naturally which is why thats a common offer, to wait. The rest wind up joining that thread

If I could distill one notion from that sixty pages, it would be this.

All those tanks came to the thread after watching the -very- first algae pop up, and they took no direct action until the whole dang tank was wiped. Notice how many are active gfo users anyway and still have a wrecked tank.

I'm not saying to dump peroxide in your tank as a new keeper, many would say thats horrible advice. I am saying though, your tank can be algae free every day of its life very easily and you can either be the one with the wrecked tank, or the one fixing the other wrecked tanks. Fire is an option if you don't like peroxide. There is a reason I don't use simple manual scrubbing or removal, it doesn't work as well. 99% choose the wait it out option


Which is why if you track that thread, it will last with active participation as long as I'm around to type on it. I love old school reef philosophies....they keep me busy and entertained correcting the havoc they create.

If you have nice coralline green algae thats not a big deal and no reason to treat. But if your invader is anything like those, get to doin something.
Commonly accepted algae options are fish, clean up crews, phosphate management and nitrate management where your hands never actually take care of the algae. That's been the standard for 30 years or so.

There really is a chance your initial algae might go away, your tank is new. So set a due date for yourself. Pick a date you won't allow your $$ to look crappy and follow all normal rules until that point. After that point, get mean.
Last edited: Oct 25, 2013
K

Some pictures I just took. It doesn't come off with a toothbrush.... 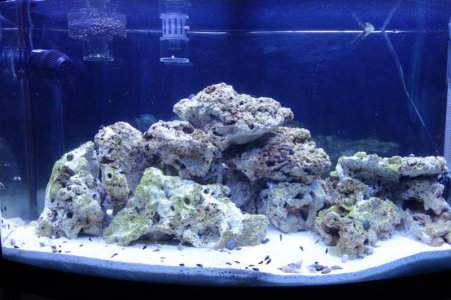 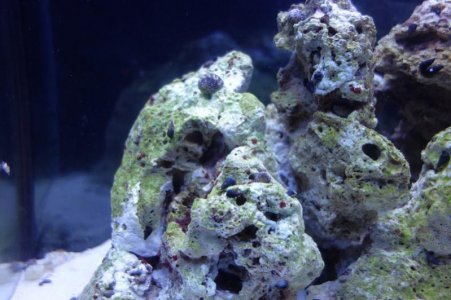 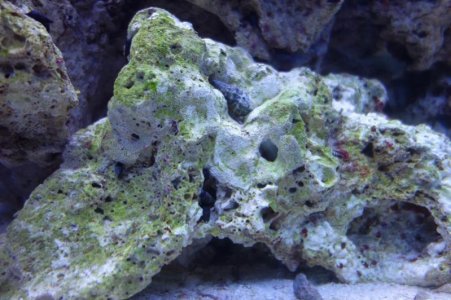 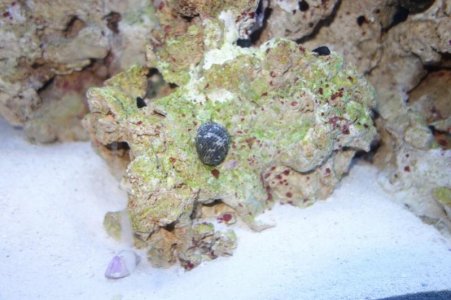 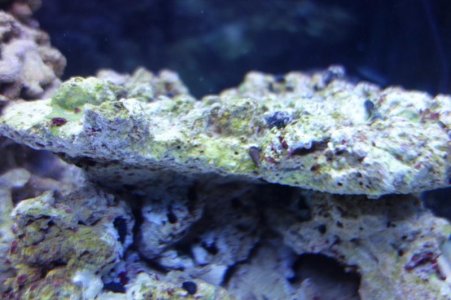 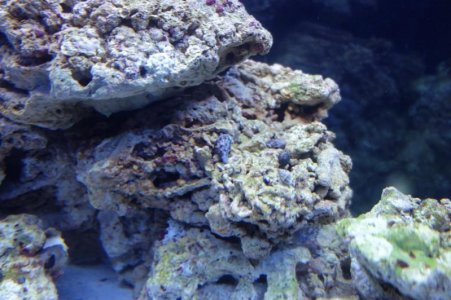 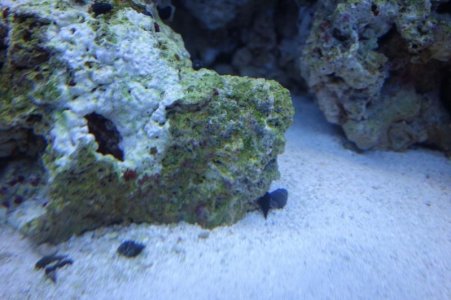 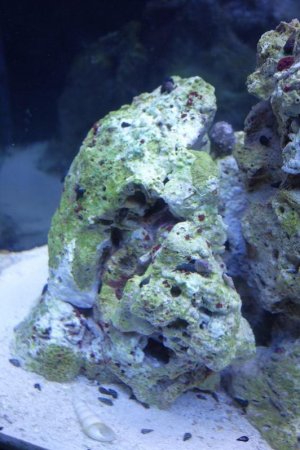 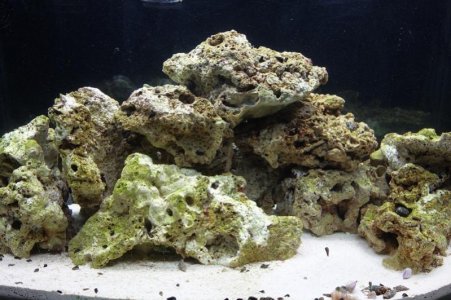 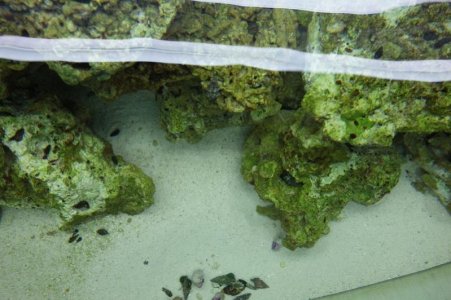 Really that doesn't look bad at all, it is exactly the course for a new reef. I don't worry much on that low level micro algae its more for your first patch of gha. Since you aren't stacked with corals, kill the lights and watch the initial phosphates is a fine offer for that tank as a much more simple treatment option. You can also continue on course and make sure it goes away after a few weeks, I see no need for big treatment based on those pics. Very nice start ! But as the months go by and you get some age on that thing you have a little cheat for your back pocket if ever needed.
C

I agree, doesn't look all that bad. Tank goes through 'algae' cycles just like it goes through 'bacterial' cycles. The key is not to let hair algae get a foothold, and your CUC ought to manage that for you. just let it be and before you know it the red and pink coralline algae will predominate.

As always, this forum is a HUGE help. I'll keep up with the water changes, monitor nutrient levels and reduce the lighting time a little. If things don't improve in the next 2-3 weeks I'll start the "non-waiting" approaches.

Thanks to ALL for your input and guidance.

:fish1: Was your rock, live rock or dead rock when you put it in the system? If it was dead rock I would get some GFO and a reactor as the dead rock is leaching phosphates from the rock into your aquarium. Also buy yourself a good phosphate checker ( Hanna ) or something similar. :fish1:
K

It was dry rock and as I understand it, and I could be wrong, dry rock shouldn't leach phosphates.....

I've reduced the amount of light and it doesn't seem to be getting any worse. I'll continue with the water changes and see what happens over the next couple of weeks.
P

Some of that looks like coralline algae growth, which would explain why it doesn't come off with a toothbrush.
S

CUC+skimmer should take care of that in time.
Regarding lights - these help photosynthetic organisms to grow, so I would not limit them. I do not see anything bad on algae - it absorb bad stuff from water. As long as you have way to export it, it is making you a service.
Not all bad stuff is NO3/PO4, there is a lot of hidden.
A

Correct me if i'm wrong, but i have the green in my tank as well, won't come off with a brush, and i believe it is coralline algae. It doesn't get out of hand for me, just covers my rocks and makes it look more natural. Nothing to worry about.
You must log in or register to reply here.

C
Tank been Dormant for 2 Months