Hi.
I set up my tank this weekend and have some questions about the live rock / cycling / break in period.

A friend of mine has held a successful reef aquarium for a long time, but he took a break about a year ago. He sold most of his stuff, and placed the remaining rock in a tub with circulation and heat, but no lighting.

This summer I got some dead live rock (had stood dry for some years) I placed this in his tub, hoping some of the remaining life on his rocks would move over to mine. Today, all the rock looks sterile.

Right now I'm wondering how the break in period will be for my tank. I'm not sure whether there are any of the wanted microorganisms in my rock.

If the rock is dead, will the tank never cycle or will it just take more time compared to if I used "œfresh rock"?
Which indications could best tell me if I need to replace my rock, and when should I expect to see them? I was told to just measure NO2 and NO3 after about a week "“ then, if these values were decreasing the following week, I shouldn't worry too much.

It will just take more time; they will eventually populate and produce a biological filter, but over a period of months. The cycle really isn't over until you're unable to detect any ammonia, nitrite, and barely (if any) nitrate. The tank isn't ready for corals until all your parameters are in line, so measure for alk, calcium, magnesium, on top of nitrates. Be prepared for waves of algae.

If the rock has been in the tub for a long time (like months) it should be fully cured. You may not see a cycle at all.

The rock that was dead for years should have been cleaned really good...even scrubbed and rinsed multiple times before curing. Otherwise you may get a spike.

Water testing will answer all questions.
B

If possible, I would try to add a couple of pieces of live rock (whether from a LFS or your friend) to help populate the dead rock.

Thanks for the info guys.

The dead rock was cleaned very well. I scrubbed it for hours, and put it in running water for a few days before i put it in my friends tub where it sat for roughly 3 months.

There is no LFS who has rocks where I live, and the remaining rock my friend has looks just as dead as mine (all completely white and sterile)

Team RC
Place a raw shrimp in the tank. As it decomposes it will produce the nutrients required for a cycle. Monitor your ammonia and nitrite levels, when they spike and then drop to zero your initial cycle is complete.
R

A few pieces of live rock should seed everything else.

i used the additives from prodibio to cycle some dead rock recently. It worked awesome. I had the rock in the tub of water for a couple weeks and never saw anything but ammonia. I decided to give the prodibio a shot and after about 2days there were tons of nitrites and nitrates present. let it go for about a week or so and added a 2nd dose of prodibio and within a few days it was 0's across the board. Had i not added the stuff from prodibio that rock would probably still be cycling.
F

I had about 100lbs off live rock in a trash can with sw and air for about a year. I set up a tank added about 20lbs more fresh live rock. Waited about a month and tank was ready to go and in no time all rock looked the same.

Not a lot of marine aquarists where I live, but I finally found one
His tank is far from perfect though :S. He pretty much gave up on it when it cycled, and now the tank is covered in green hair algae. If I understood him correctly, it has not had proper lighting the last few months.

Anyway: Do you suggest I place a few rocks from this guy into my tank?

Ok, added a few small rocks from the other guy's tank. They have been in my tank for almost a week now. I still don't measure any NO2 or NO3. (?)
My skimmer started working for the first time shortly after i added the small rocks.

At first nothing seemed to change with either of the rocks, but the last 2 days the green algae on the new small pieces have started growing more, and I've noticed a few brown spots here and there on my "old" rock.

Any advices from here on? Should I remove the "small green ones" 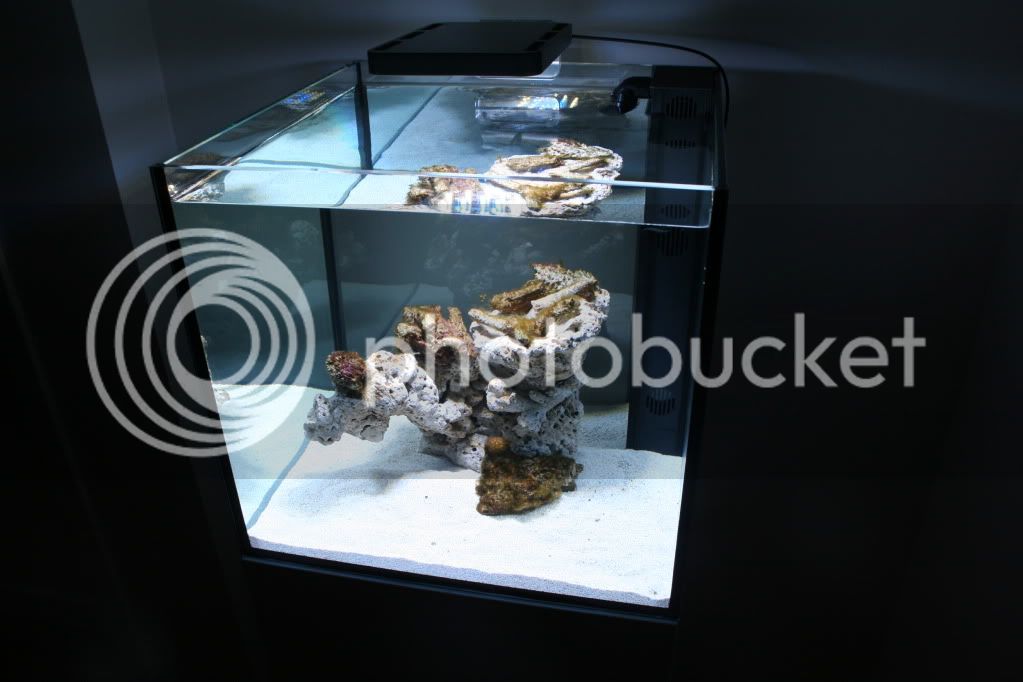 That hair algae could get you started on a long battle. That stuff is tough to get rid of, and grows really fast. At the very least, take those little rocks out, and scrub the heck out of them.

Ok, they are out. I didn't really want them in the display in the first place.... just that I was told by some locals that it would be good and speed things up oh well... :sad2:

That is some nice looking rock, a few months from now it should be covered in corraline algae.

I was under the impression that you needed some sort of foundation of corraline algae in order to to grow more of it. As of now, I don't have any in the tank (Some of the green hair algae covered rocks I just removed had some on it though, but... )

I keep asking the same questions over and over I guess, but its just that I keep getting different answers on different forums and from ppl RL

So; stay with my current "sterile" setup? 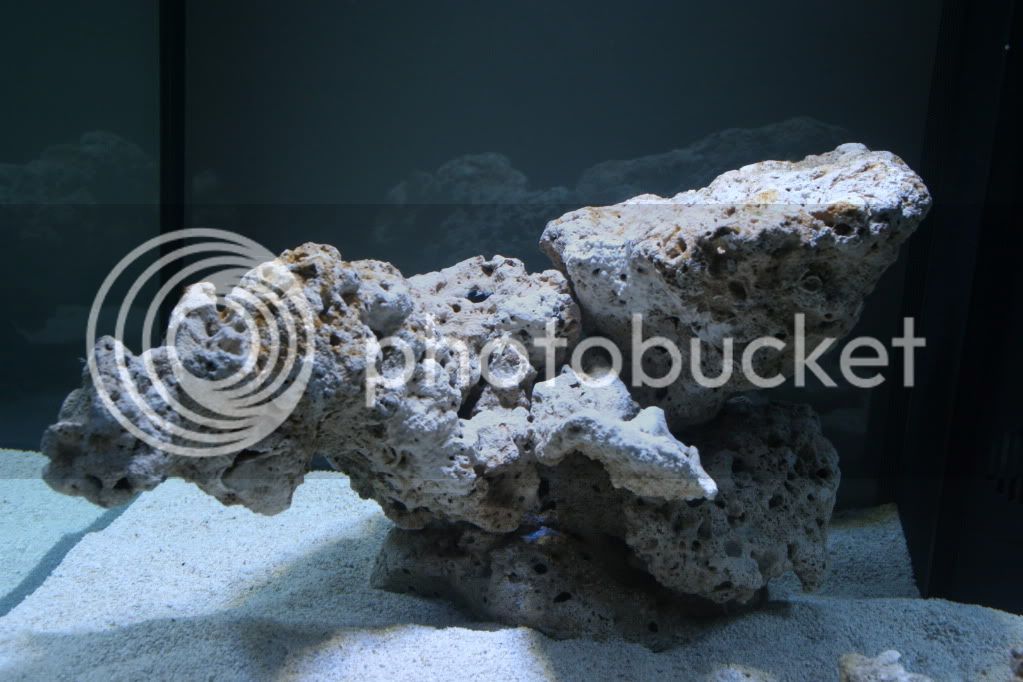 When you eventually get some coral frags, there will almost certainly be some coraline algae on the plugs and that will get you started. To make it go a little quicker, you can just scrape some of that off into the tank.

As for testing during cycling, the bare minimum approach is just to measure for ammonia. When that is back down to zero, you can start adding some small amounts of livestock. Nitrites and Nitrates won't have finished cycling at that point but neither is very toxic in marine tanks at low levels as long as you stick with relatively hardy stuff at first.

You will need a source of food for the cycle. There are any number of ways of doing that. Tossing in a shrimp as mentioned earlier is one.
You must log in or register to reply here.

A
Can I cycle rocks with tap water?

Moving a Fluval 32 setup Help do and don’t do?